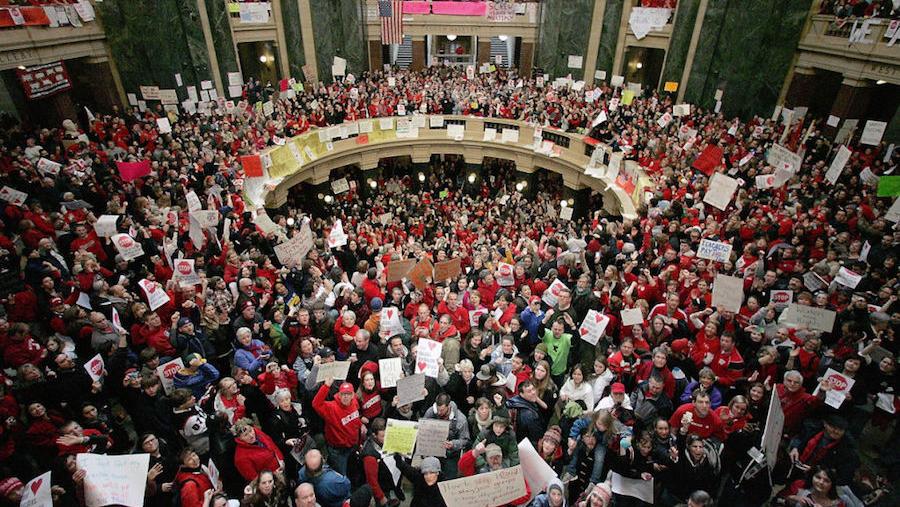 On September 14, the Guardian newspaper which published the Snowden revelation, published a massive set of documents from the Scott Walker dark money probe know as the "John Doe" investigation. We highly recommend the lengthy expose on secret money and backroom deals, which you can access here. If you don't have time to read all 1,500 emails and documents in the cache, our staff has picked out some of the most illuminating.

At the heart of the matter are three men. Scott Walker, RJ Johnson (who simultaneously worked for Walker and the dark money machine Wisconsin Club for Growth, say prosecutors) and Keith Gilkes who was Walker's chief of staff in 2011and his campaign manager in 2012. Prosecutors were investigating whether campaign money was channeled through a purportedly "independent group" in order to circumvent state and federal rules that set limits on political contributions and require them to be publicly revealed, explains the Guardian.

1. National Club for Growth's David Keating questions RJ Johnson of Wisconsin Club for Growth, who becomes Walker's top campaign advisory shortly after this email, about the legality of his activities way back in 2009 prior to Walker's run for Governor in 2010. (2012-08-14-Exhibits-01-100-PT1, p.25)

2. Nick Ayers of Republican Governors Association outlines a coordinated "battle plan" to Gov. Walker and Reince Priebus at an early date March 2011. RGA would go on to spend a whopping $9.5 million on the recall as an "independent" expenditure group. (2012-08-14-Exhibits-01-100-PT1, p.28)

4. Scott Walker talks to Karl Rove. "Bottom Line: RJ helps keeps in place a team that is wildly successful in Wisconsin. We are running 9 recall elections and it would be like 9 congressional markets in every market in the state and twin cities." (Key-Misc-Set-One, p.16)

6. Fundraiser Kate Donor explains the strategy of locking down commitments from a host of supposedly "independent" groups like the Koch Brothers Americans for Prosperity to Keith Gilkes, RJ Johnson and Gov. Walker. (Fundraising-Coordination, p.14)

7. Keith Gilkes forwards "oppo" opposition research on controversial potential donors, including Harold Simmons, Dallas-based CEO of a lead pigment company, to Gov. Walker. After this exchange, some checks from these givers are sent to Wisconsin Club for Growth where they will remain secret and not be publicly disclosed as a campaign contribution to Walker. (2012-08-14-Exhibits-01-100-PT1, p.61)

9. Affidavit of Wisconsin Club for Growth director Eric O'Keefe who explains its all about "liberty and fiscal responsibility" not winning elections. (WICFG-Quash-Aff)

10. Jay Rosser, a representative of T. Boone Pickens, email to RJ Johnson and Kate Doner. Interestingly, declines to give: "we recognize the opportunity to give anonymously, but frankly that is just not our style." (Fundraising-Coordination, p.4) It is likely that not all the people mentioned in these documents gave secretly to Walker.

I'm from Wisconsin and I can tell you from first hand experience that corruption and crimes against our citizens is worse than the agencies whom are suppose to protect us will admit. They routinely turn victims of corruption away and when corruption is exposed the agencies whom are suppose to protect the states citizens further violate them by covering it up. We are not talking about a little white lie. When our courts are this corrupt it is a national security issue. Send me a good reporter and ill give them absolute proof of my counties da office selling criminalizations and my rights,not to mention the discrimination they used as a foundation for the fraud and crimes against me.