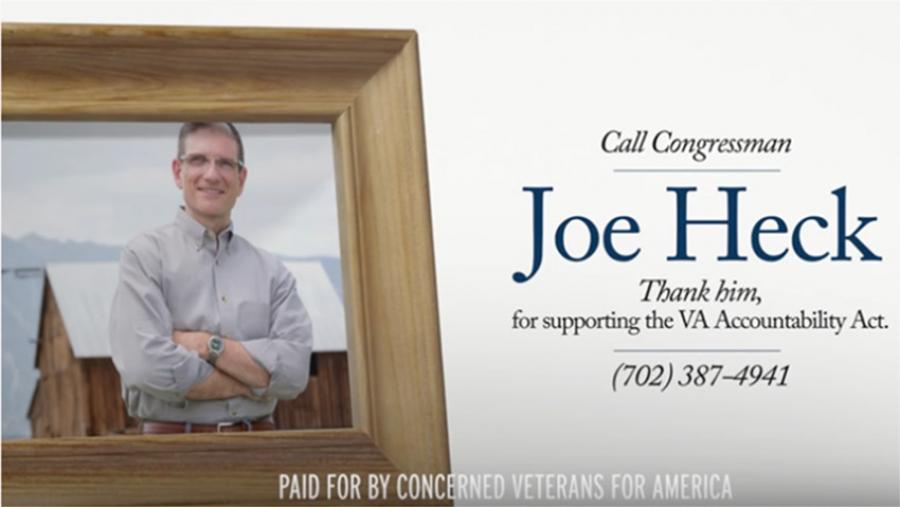 The Koch brothers have fired their first salvo--that the public knows about--in the 2016 election year.

The Koch-funded Concerned Veterans for America is beginning to air a $700,000 broadcast and digital advertising buy throughout Nevada supporting U.S. Representative Joe Heck's candidacy for Senator Harry Reid's seat. Senator Reid will be retiring at the end of his term and Rep. Heck's bid for the vacant Senate seat will be contested by Reid's preferred successor ex-Nevada Attorney General Catherine Cortez Masto.

The advertisement can be found here.

Koch Industries has been one of Rep. Heck's top contributors throughout his career, and Heck voted with Koch-held positions nearly 90 percent of the time in 2015. In 2014, the Koch-funded Americans for Prosperity also ran a $200,000 advertisement in support of Heck.

Concerned Veterans for America and its related organizations have received nearly $21 million in funding from Freedom Partners, which Politico has described as the Koch network's "secret bank," and has received nearly $2 million from the Koch-linked TC4 Trust since 2011. The Koch brothers' donor network has pledged to spend close to a billion dollars in the race for the White House in 2016 and has already spent nearly $400 million in 2015. The details of this spending may not be known for years it at all.

Learn more about this group at Sourcewatch.org.