As Jobs Flee WI, Legislators Lock-Down Their Own With Unlimited Dark Money 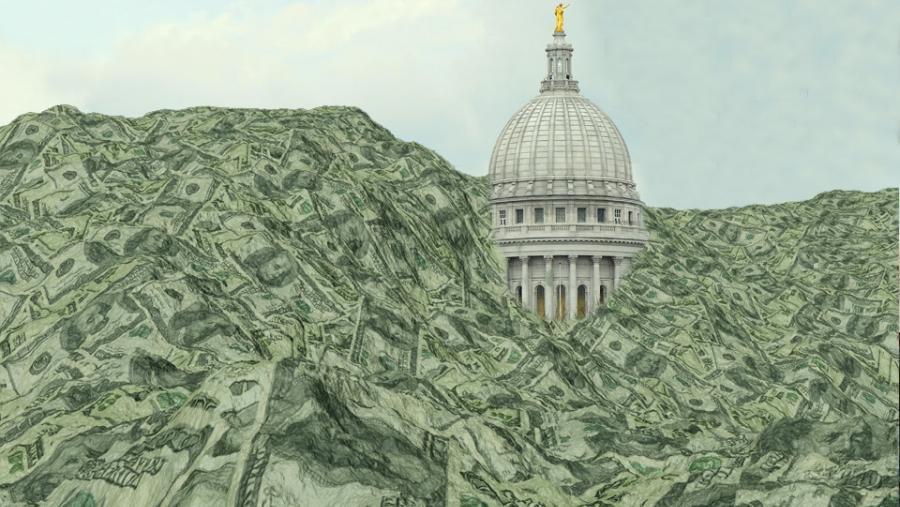 This week, two major Wisconsin employers sent shockwaves through the state when they announced plant closures and layoffs that could affect thousands of jobs.

The Republicans who control the Wisconsin state senate called an "extraordinary session" for Friday--not to address the loss of family-supporting jobs in Wisconsin, but to allow out-of-state billionaires to secretly pour even more money into state elections.

Rep. Terese Berceau, a Democrat, calls the bills nothing short of "an effort to create a permanent one-party state," helping give job security to Republicans for years to come.

Wisconsin's economy is in rough shape. Statewide, workers’ annual earnings averaged $51,214 last year, 10.1 percent less than the national average and also lower than every surrounding state except Iowa. Walker fell far short of his 250,000 jobs pledge, only creating about half of the jobs promised in his first term. And the state lags both its neighbors and the national average in its rate of job growth, even as the U.S. economy has recovered from the recession.

To make matters worse, the state's economy was rocked this week by plant closures and layoff announcements. The Oscar Mayer factory that employs 1,000 workers in Madison and has been a fixture in the community since the early 1900s abruptly announced it would be closing and moving its headquarters to Chicago, a move that will send shockwaves through the state economy. The same day that the Oscar Mayer news broke, Quad Graphics, which employs 7,000 people at 14 facilities in Wisconsin, announced it would have to close some plants and cut $100 million in costs. 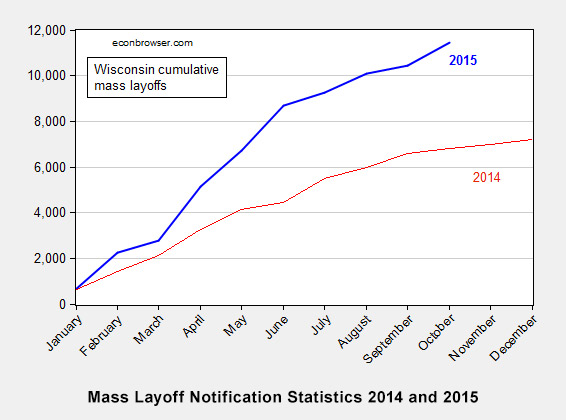 Mass layoff notifications are way up from last year, as this graph by UW Professor Menzie Chinn shows.

The state senate is calling an extraordinary session, not to address jobs or the economy, but instead to vote on two bills that make it easier for politicians to secretly raise money from out-of-state billionaires.

In part, these bills are a response to the "John Doe" investigation into alleged campaign finance violations by Walker's 2012 recall campaign, since the measures dismantle the elections agency that supported that probe and legalize the conduct that was being investigated.

But the bills also shield politicians from scrutiny, since they exempt a broad array of political spending from donor disclosure laws. The bills block the press and public from identifying a politician's financial supporters including those corporate interests seeking political favors.

Scott Walker was swept into office in 2010 on a promise to create 250,000 jobs in his first term. He reaffirmed that pledge in 2012 as he faced a recall election, and declared that his administration would be "focused like a laser beam" on job creation after he prevailed in that vote.

The centerpiece of Walker's job creation plan has been the Wisconsin Economic Development Corporation (WEDC), a privatized jobs agency chaired by Walker that has been plagued by mismanagement and scandal--and whose economic development grants have overwhelmingly flowed to Walker's campaign contributors.

In one case, Walker's administration urged WEDC to give a $500,000 unsecured loan to a company owned by Bill Minahan, who a few months earlier had maxed-out on contributions to Walker's campaign. The Minahan loan didn't go through the underwriting required by law, and his company ultimately went bust, with the taxpayer-funded half-million-dollar loan not being repaid.

WEDC handed out hundreds of millions of taxpayer dollars in the form of bonds, grants, loans, and tax credits to Walker donors, and could only account for 5,680 jobs as of 2014, according to a Center for Media and Democracy analysis.

The press managed to connect political donations to WEDC grants because those donations were disclosed. Yet one of the bills being voted on this week would make it harder to connect those dots. Under the bill, a CEO seeking a WEDC grant could make a contribution to a politician's dark money political operation with no requirement that it be publicly reported. The politician will know where their support comes from, but the public and press will not, making it impossible to determine whether those supporters later receive special treatment or taxpayer-funded loans or grants.

Plus, even if a donor makes a direct contribution to a candidate's campaign that must be disclosed, the bill would end the requirement they name of their employer, making it harder to detect which businesses are supporting a candidate.

The other centerpiece of Walker's job creation effort was a rewrite of the state environmental laws to pave the way for a Florida-based mining company, Gogebic Taconite, to build an open-pit iron ore mine in a pristine area of Northern Wisconsin.

A year after the proposal became law, documents emerged in the John Doe probe showing that G-Tac's CEO had secretly donated more than $700,000 to a dark money group associated with Scott Walker's campaign. The public and press had no knowledge of these contributions as the hotly-contested mining bill was being debated; the secret donation were more than 22 times the amount of disclosed contributions to candidates.

The campaign finance bill that the senate is expected to approve this week would legalize these forms of secret fundraising. Although G-Tac's secret donations later became public thanks to the John Doe probe, changes to both campaign finance law and the John Doe law would prohibit such investigations, even in cases of political corruption--so in the future, the public will likely never know who is bankrolling their elected officials.

The state's largest newspaper, the Milwaukee Journal Sentinel, correctly tied the measures to an earlier effort to gut the public records law:

"The same gang that in July tried to cut off access to public records showing how legislators operate now wants to cut off the public's ability to know who is paying for their campaigns. The purpose of this new secrecy measure is just as nefarious as the July attempt to gut the state's open records law — and deserves the same outrage and condemnation from the public . . . Those who enter the political struggle should do so with full disclosure. And the public should demand nothing less."

Wisconsinites Not Calling for These Bills

The vote on these bills is scheduled for Friday in a hastily-called "extraordinary session." In further evidence of the secrecy that has befallen Wisconsin, discussion about the bills happened outside of the capitol, and the updated legislative language won't be revealed until 24 hours before the session convenes. Votes are likely to take place late in the evening on Friday, which has the effect burying press coverage over the weekend.

Support for these measures are not coming from average Wisconsinites.

Records requests show that the sponsor of one of these bills, Sen. Leah Vukmir, received a flood of emails from Wisconsin voters urging her to abandon her plan to dismantle the Government Accountability Board (GAB). Based on records she released, not a single constituent asked her to dismantle the GAB.

Common Cause Wisconsin has counted thousands of calls and messages from Wisconsinites to state senators urging them to reject these bills. Polls have consistently shown that both Republican and Democratic voters want less money in elections and stronger donor disclosure laws. And sixty one communities in Wisconsin, including some in the most conservative pockets of the state, have passed referendums expressing opposition to the U.S. Supreme Court's decision in Citizens United and declaring money is not speech.

So who is calling for these measures? The Republican politicians in control of state government and the billionaires who fund them.

The only group lobbying in favor of the bill to deform the GAB is David Koch's Americans for Prosperity, which spent $10 million in Wisconsin during the recall elections. A newly-formed group called "Wisconsin Alliance for Reform" has begun running radio ads supporting the bill; its web domain was registered by Lorrie Pickens, a former leader of AFP, and its Executive Director is Luke Fuller, a former staffer for the bill's sponsor Sen. Leah Vukmir (who is also the number two at the Koch-backed American Legislative Exchange Council, or "ALEC.")

The only groups that lobbied in support of the bill exempting political corruption from John Doe probes is, again, Americans for Prosperity, as well as Wisconsin Family Action, a group that was implicated in the John Doe probe.

The only group lobbying in support of the bill to gut the state's campaign finance laws is Wisconsin Right to Life, whose Executive Director is Pickens, the former AFP leader who also registered the web domain for "Wisconsin Alliance for Reform." Pickens was implicated in the 1997 campaign finance coordination probe that resulted in the harshest penalty ever levied for election violations in the state, and which established the legal precedent for the Walker investigation.

And these special interest groups, funded by out-of-state billionaires like the Koch brothers, are apparently calling the shots within the Wisconsin legislature, regardless of what voters think.

This week, a Wall Street Journal/NBC poll found 69 percent of both Republican and Democratic voters agree with the statement that they "feel angry because our political system seems to only be working for the insiders with money and power . . . rather than working to help everyday people get ahead."

Proof positive of what I have For Sale state with no moral compass WISCONSIN--please note the last 3 letters of state name.
How soon we forget the Democrats and their $4 Billion debt that was handed to Walker when he became Gov. And the fact that it was the witch hunt at all cost by a democrat DA that led to the new laws to bring common sense to our government and limit the power of an individual to go on a private vendetta against an elected official. There is certainly a much stronger moral climate in Wisconsin today than we have had for a long time!
Never let truth impede your beliefs. What you call moral, most people identify as unabashed corruption and bribery. Wisconsin, welcome to the new Mississippi of the Midwest.