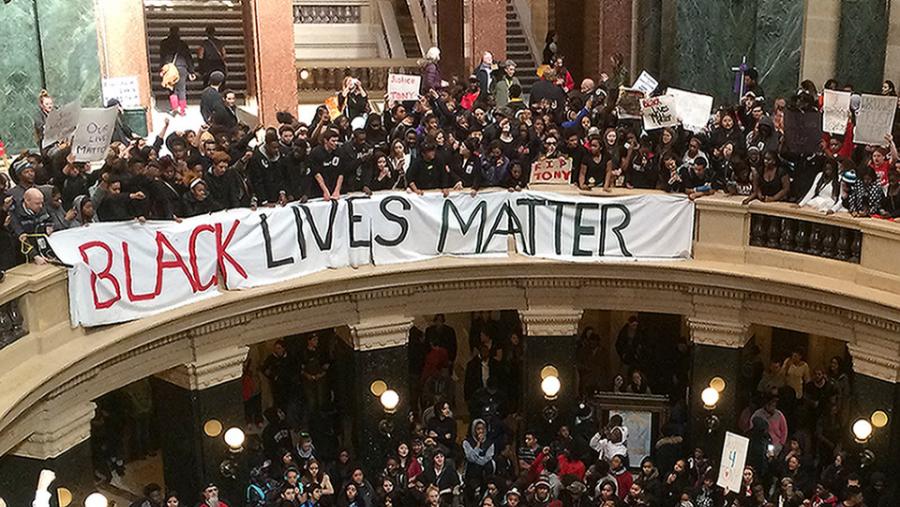 When asked about race relations on the first anniversary of Michael Brown's killing at the hands of a white police officer in Ferguson, Missouri, Walker replied:

In other words, acknowledging systemic problems like the documented wave of police killings of unarmed black men, or the racial wealth gap, or disparities in sentencing and incarceration, creates "discord." During the GOP debate, he similarly dodged a question about the Black Lives Matter movement, which even Fox News anchor Megyn Kelly called "the biggest civil rights issue of our time."

Walker is far from the only politician to avoid addressing race. Yet his tenure as an elected official has proven uniquely bad for people of color and, despite his talk of "unity," Walker has long used race as a means of dividing the public.

"Walker is the governor of the worst state in the country for black people," said Jennifer Epps-Addison, Executive Director of Wisconsin Jobs Now, a Milwaukee-based nonpartisan advocacy group. "Before making comments on race and being divisive, the governor should address why he is presiding over a state with the worst racial disparities in the country."

A study released earlier this year found that Wisconsin has the country's highest black-white gap in terms of income, employment, health, incarceration, and education--problems that have grown worse during Walker's 25 year tenure as an elected official, and some of which can be directly tied to policies he promoted.

One example of Walker's know-nothing approach to the racial divide is his eliminating funding in June of 2011 for a program to track and remedy the state's worst-in-the-nation rate of racial disparities in the criminal justice system.

Most Wisconsin counties arrest black people at exceptionally high rates--even outpacing the disparities in Ferguson, Missouri--and the tracking program had only taken effect in January 2011, just as Walker took office. Walker declared that killing the program "allows law enforcement agencies to focus on doing their jobs," but State Bar President James C. Boll, Jr., said at the time that repealing the program means Walker and the legislature "concluded, without any empirical basis, that racial profiling does not exist in Wisconsin or is not a significant problem."

By almost any measure Walker has been the most divisive governor in Wisconsin history, and helped make the state one of the most bitterly polarized in the country. And throughout Walker's 25-year-long political career he has exploited the racial divide between majority-minority Milwaukee and the majority-white suburbs that surround it, a phenomenon documented in the New Republic last year.

"Walker has racialized politics in Wisconsin," said Brandi Grayson, founder of Wisconsin's Young Gifted and Black coalition. "Walker is far from able to bring people together, but he is amazing at bringing people who have power and resources to the table, and excluding everyone else."

As governor, Walker has used Milwaukee (and its residents of color) as a foil, warning that people don't want Wisconsin to "become another Milwaukee," perpetuating baseless claims of voter fraud, and pushing policies like drug testing for food stamp recipients--strategies that play off of racial fears in the white parts of the state that he has long relied on for political support.

"Walker embodies the lessons of Lee Atwater," Grayson said, referring to the infamous Republican strategist. "Instead of saying 'black,' he says 'those people' or promotes legislation like drug testing food stamp recipients" and other "racial dog whistles," she said.

In the 2012 recall elections, for example, Walker attacked his opponent, Milwaukee Mayor Tom Barrett, with racially-charged ads about violent crime in Milwaukee that Barrett denounced as 'Willie Horton'-style tactics. Unabashed racists certainly heard the racial dog whistle: a website affiliated with the Council of Concerned Citizens (the white supremacist group that influenced Charleston shooter Dylann Roof) celebrated the ads as "Scott Walker Go[ing] Racial" and patted Walker on the back for "bring[ing] up the Negro Question in Milwaukee."

The white supremacist site later noted that Walker received less than six percent of the African-American vote in the recall elections.

"When you unite the interests of black folks in urban centers and white people in rural communities, that's how you build power, and that's what Walker is afraid of," Epps-Addison said. "That's why he is using red herrings to divide us."

Wisconsin "Has Increased Racial Disparities in Almost All Categories"

Although Wisconsin's racial divide preceded Walker, his 25 year tenure as an elected official has, in many cases, made things worse.

"Walker's track record in terms of policy and legislation regarding the poor and black has increased racial disparities in almost all categories," Grayson said.

For example, recent studies have found:

Wisconsin has the country's highest black unemployment rate: Last year, the joblessness rate among African-Americans in Wisconsin was 19.9 percent, or 1 in 5 people, according to an Economic Policies Institute study. This was the highest rate in the country and double the national rate of unemployment during the recession. The problem is particularly acute in the Milwaukee area, which is home to 72 percent of the state's black population and has been hit particularly hard by deindustrialization. The last big jobs hope for Milwaukee came when train company Talgo established a manufacturing facility in a long-abandoned industrial area to build cars for a planned Milwaukee-Madison train line, which was backed by $800 million in federal infrastructure funds. Yet after Walker was elected governor in 2010, he stopped work on the train line, sent the federal funds back to Washington, and Talgo shut down the facility (and sued Walker for breach of contract).

Wisconsin is the worst place in the country to grow up black: a 2014 study from the Annie E. Casey Foundation assessing factors like household income and educational achievement ranked Wisconsin 50th for black children. For example, 70 percent of white children grow up in households with income above 200 percent of the poverty level, versus just 20 percent of black children; white kids are six times more likely than black kids to be proficient in 8th grade math; and white young adults are three times more likely to have a degree than their peers of color.

Walker has not addressed this divide in his tenure as governor.

Wisconsin locks up a higher rate of black men than any other state in the country: 13 percent of black men in Wisconsin are incarcerated, which is nearly double the national rate, and almost half of all black men in Wisconsin have been jailed by age 30. These disparities can be attributed, in part, to tough-on-crime measures that Walker pushed as a young state legislator in the 1990s representing a majority-white suburb adjoining majority-minority Milwaukee. Taking a page from the American Legislative Exchange Council (ALEC), Walker pushed ALEC's Truth in Sentencing bill into law in 1998, which eliminated parole and early release, and had the effect of exploding the state's prison populations--and disproportionately filling those prisons with people of color. Walker also tried to privatize the state's prisons and house the state prisoners in out-of-state private facilities, which would have benefited ALEC funders like Corrections Corporation of America, and also sponsored an array of bills to impose mandatory minimum sentences on a long list of non-violent offenses, and even to introduce chain gangs and prison labor.

After Walker left the Assembly in 2002 to become Milwaukee County Executive, the state legislature began rolling-back his truth-in-sentencing law. But when Walker entered the governor's office in 2011, he reversed this progress and pushed for the full restoration of the ALEC truth-in-sentencing requirements. During Walker's tenure as governor, state spending on corrections eclipsed spending on higher education for the first time.

Milwaukee is the most segregated city in America: Milwaukee is among the most segregated cities in the country, and the cities schools are also among the most segregated. Although the U.S. Supreme Court ordered school desegregation in the landmark 1954 Brown v. Board of Education decision, segregation persisted in Milwaukee, and it wasn't until the late 1970s that federal courts ordered the city's schools to integrate. A voluntary racial integration program known as Chapter 220 was implemented in 1977 to transfer students of color to suburban schools, and white suburban students to city schools, and for a time, it was successful in helping reduce segregation--Milwaukee's schools were among the country's most integrated in the 1980s and 1990s--but it was undermined by race-neutral "school choice" measures and never updated to adapt to changing conditions. Walker's latest budget cut funding for the Chapter 220 program altogether.

Today, Milwaukee's schools are as segregated as they were in the 1960s.

Besides exploiting racial tensions for electoral gain, as governor he has run roughshod over the decisions of Milwaukee's residents.

"Walker has consistently shown hostility towards Milwaukee," Epps-Addison said. "Every time that the community has tried to pass policies to improve their condition, Walker has blocked them at every turn."

He pushed a bill blocking the paid sick days law that Milwaukee voters had enacted with overwhelming support, and which would have particularly benefited workers of color in the city. His budget eliminated residency requirements for municipal workers. He signed a series of sweeping changes to landlord-tenant law, giving more power to landlords and barring cities like Milwaukee and Madison from enacting their own protections for tenant rights.

"Walker has a lot of explaining to do, and he should do that before selling this false promise of unity," Epps-Addison said.