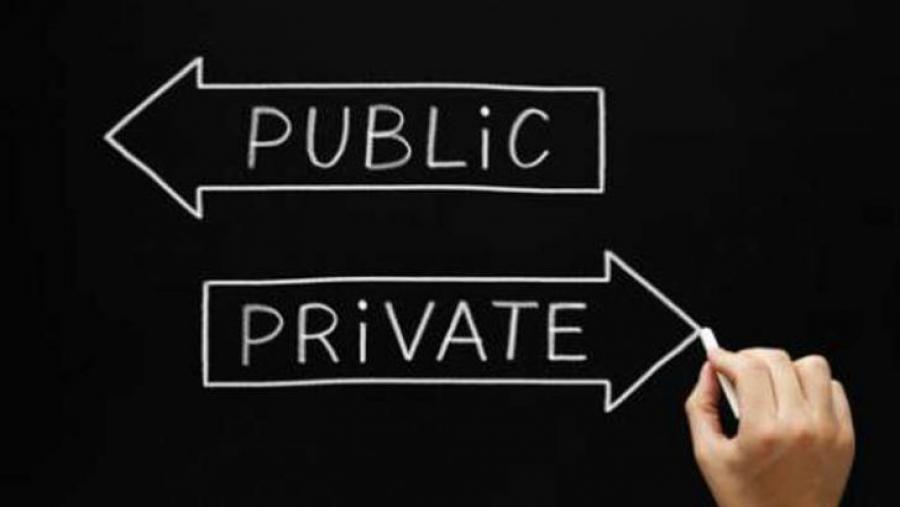 At a time when other states are reinvesting in public education, Wisconsin continues to slash and burn. The Wisconsin Budget Project says that the state is now spending $1,014 less per public school student than it did in 2008 and more funds are slated to be siphoned off as Governor Scott Walker's budget proposes an unprecedented voucher expansion, draining funds from public education and directing them to for-profit and religious schools.

In crafting the budget, Walker is taking his cues from the American Federation for Children (AFC), a major force for school privatization nationwide. It is funded and chaired by billionaire Betsy DeVos, and pushes its privatization agenda in the states with high-dollar lobbying and attack ads.

It also pushes "model bills" through the American Legislative Exchange Council (ALEC). Disgraced former Wisconsin lawmaker and longtime Scott Walker friend and ally Scott Jensen is a "senior advisor" to AFC and often represents the group at ALEC meetings. Backing this agenda is the Milwaukee-based Bradley Foundation, which has spent $31 million since 2001 on groups and individuals pushing for school vouchers and school privatization.

Governor Scott Walker's 2011-2013 budget slashed funding for K-12 education by $792 million—the biggest cut to education in Wisconsin's history. That Walker budget also removed the enrollment cap on the Milwaukee school voucher (or "parental choice") program, which allows K-12 students to attend private and religious schools on taxpayer money, much of which is taken from the public school district. The program currently enrolls 26,000 students at an annual cost to the state of $191 million (an average of $7,300 per child) funneled to private and for-profit schools each year, taking $61 million of that directly from the already struggling Milwaukee Public Schools. Walker has also launched new voucher programs for Racine and statewide that now enroll about 3,000 students and cost another $20 million a year.

Early data from the statewide program indicates that Wisconsin is subsidizing many families who were already paying to send their kids to private schools. According to the Department of Public Instruction (DPI), nearly eighty percent of students participating in a recent statewide expansion of the voucher program were not previously in public schools and nearly seventy five percent were already attending a private school.

In his 2015-2017 budget Walker proposed another $127 million in public K-12 education cuts, cuts that the legislature has already deemed unacceptable. And Walker projected another $140 million more in education cuts to the next biennial budget two years from now.

"This budget sets Wisconsin on the path to delivering a legacy of less for hundreds of thousands of public school kids," says Tony Evers, head of the Wisconsin Department of Public Instruction (DPI).

In his 2013-2015 budget, Walker upped the income ceiling for the Milwaukee school voucher program to 300 percent of the federal poverty line. A married couple with two children can receive a public voucher for private schools if they earn $78,637, which is far more than the median U.S. household income of $52,250. When originally introduced in 1990, Wisconsin’s school vouchers were pitched as social mobility tickets for minority students, and the program was championed by some African-American lawmakers, notably Annette "Polly" Williams. But Walker’s dramatic expansion, which opened the program to a broad swath of middle class parents, drew fire. "They have hijacked the program," Polly Williams told the Milwaukee Journal Sentinel in 2013.

Despite the fact that voucher students perform worse than public school students in reading and math when compared to socioeconomically similar cohorts in public schools, Walker announced plans to lift the cap entirely on the statewide school voucher program in 2015. Instead of immediately eliminating the cap, however, the legislature has proposed gradually removing it over the next ten years. Even so, the Legislative Fiscal Bureau estimates voucher expansion will cost the state $600-800 million over that period.

In addition, Wisconsin is bleeding a similar amount to independent charter schools, with some $68 million per year now going to just 23 independent charters, mostly located in Milwaukee.The legislature has given the green light to dramatic expansion of independent charters by allowing the University of Wisconsin System and some county executives, including conservative Republican Waukesha County Executive Paul Farrow, to authorize new charters.

Walker's 2015-2017 budget bill created an "alternative teacher licensure" in which anyone with a BA and "relevant knowledge" could apply to teach middle and high school. The GOP-led budget committee further eroded the requirements, allowing anyone with a high school diploma (possibly even high school drop-outs) and a few weeks' experience in a trade or industry to apply for a license to teach science, technology, engineering and math. If Walker does not wield his veto, Wisconsin will be the first state to license teachers without college degrees, EdWeek reports.

If signed into law, the new rules would require the state to issue a teaching license to anyone that a school board decides has relevant subject matter experience.

"This is taking us back to the 18th century," said John Mathews of Madison Teachers, Inc. "That's when we learned that teachers needed real skills and started requiring the two year license. It wasn't much later that the state realized that that wasn't enough. You not only had to know history, you had to know how to teach it. Today, we have methods classes in college so instructors can master both subject matter and methodology."

A report by the Wisconsin State Journal recently calculated that state taxpayers had lost $139 million to failed voucher schools. That's a lot of money, yet Walker has not pushed strong measures to hold the program accountable for educating kids. Quite the contrary. As CMD revealed back in March, Walker not only turned a deaf ear to DPI's request for greater transparency and accountability, and an end to for-profit schools participating in the voucher program, a Walker official actually instructed the non-partisan drafting bureau to hide the proposed voucher expansion from DPI.

The budget moves away from a model of democratically elected school boards, and accountable community schools to for-profit corporate schools that operate under significantly different rules. If you want to know the basics, for instance, your voucher school's graduation, drop out and expulsion rates, good luck. These schools can, and do, ignore Wisconsin's open records and meeting laws and have fewer reporting requirements.

The U.S. Department of Justice has also been looking into Wisconsin's voucher program following numerous complaints that schools were not serving children with disabilities. But the Wisconsin legislature is not waiting, moving ahead with an ALEC "special needs" voucher bill. Plus, U.S. Senator Ron Johnson (R-WI) is now reportedly working to derail the inquiry.

While public school teaches and officials watch the changes with dismay, Walker is being cheered on by his friends at American Federation for Children, ALEC and the Bradley Foundation. "[M]ost importantly, Gov. Scott Walker was re-elected," AFC notes in its 2014 Election Impact Report.

As the head of Wisconsin's education department puts it, "The budget continues to walk away from our constitutional obligations to educate all students in local public schools." But it does "fully fund voucher expansion for private school kids and priorities special interests," said Evers.

When are they finally going to pass it?!
Why doesn't this writer tell us how spending more money on the public schools is going to improve them and why huge increases over the past 40 years have not? Does he have any compassion for the generations of kids who are not getting an education?
What huge increases? There was the QEO in place for decades capping increases in salary and benefits at 3.8%. Huge? Laughable. Cost of living was twice that.
Generations of kids without educations? What are you basing that on? 90% of Americans attend public schools. We lead the world in advances in science, technology, medicine, and more. Universities in the United States are turning away record numbers of applicants because there are more bright young people pursuing a college educations than ever before. Our schools are not failing, despite what the media and politicians would have you believe.
It is weird how the same exact dollars that magically educate kids in private schools suddenly become a useless expense when someone wants them used to educate public school kids.
One just closed in Palm Beach County; if failed in the same neighborhood as the public school that it replaced the public school had failed the standardized tests, so did the charter.) Some charters did better, but not in poor neighborhoods, with the same student body as nearby the pubic schools. Education becomes a commodity, with 2 charter schools opening in the same neighborhood, trying to recruit the same students. It's about money, not quality education. The FL legislature addressed this, and it looks as if in future.there will only be one charter allowed in a neighborhood. Meanwhile, parents are trying opt our of to the standardized (FCAT) test. Some have told their kids to break the seal on the exam, then walk out, refusing to take it, and hop into the car with mom. Six Fl counties voted to op out of the testing. It's a failure, I wouldn't recommend it there.
It's about time the stranglehold unions have had on the American education system has been loosened. For decades the unions have demanded more and more money "for the children". As education funding skyrocketed the results of American students plummeted compared to the rest of the world. Apparently all the money "for the children" went directly to obscene pensions, salaries and benefits of teachers. Teachers retire in their 50's while the average taxpayer works until 67+. Teachers receive $100,000+ pensions guaranteed for life while the average taxpayer has no guarantee of a decent retirement. Teachers pay nothing for their healthcare while the average taxpayer struggles to pay thousands of dollars every year for health coverage. It's about time vouchers brought some competition to the education monopoly. Teachers have had it too easy for too many years. Next we need to move all teachers to 401K plans, make them pay for their own healthcare, limit their salaries to the rate of inflation, eliminate guaranteed STEP raises, eliminate collective bargaining, eliminate tenure and expand the school year. Another words...have them go to work like every other American taxpayer. Taxpayers, parents and students have had it with unions buying the politicians and school boards they "negotiate" with. Our property taxes climb each year and we have nothing to show for it. Forget the 1%, public union members are the true privileged class in America.
Harold: Spend a month as a teacher and then spout off....you believe just what the anti union Repubs tell you too....why b so hateful to people educating children....ick
If teachers have it so easy, why don't you become a teacher? If public unions are so profitable, why don't you join one? If you want the benefits that union members have, why don't you organize for them? Teachers sacrificed pay raises and accepted low pay in return for earned benefits, like good healthcare and a pension. When was the last time you said to someone, "You're a teacher? You must be rich!" I guarantee you nobody said that to me when I decided to become a teacher. Instead, I was asked, "Are you sure? The pay isn't very good!" And in fact, socio-economic status is still the single most important indicator of success in our public schools. Students in well-funded schools score among the top students in the world. Our problem is that our schools are not equitably funded, and too many of our children live in poverty. Countries like Finland that score at the top of the PISA tests make sure that schools in lower income areas or with challenges like high numbers of recent immigrants get extra funding to overcome those challenges. Do we do that in the USA?