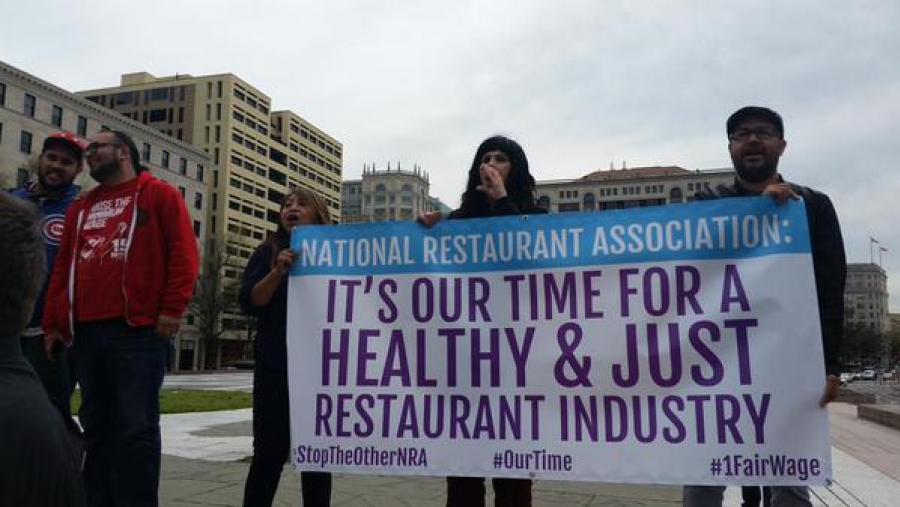 This week, a cook for a contractor serving the U.S. Senate went on strike to draw attention to the struggle of low-wage restaurant workers to lift themselves out of poverty. Bertrand Olotara, a single father, has to work two jobs, 70 hours a week, and still has trouble paying his monthly bills and relies on foodstamps.

Olotara serves some of the most powerful people in the country, and a number of Presidential hopefuls and warns in an op-ed for The Guardian: “American voters should ask themselves: if presidential candidates won’t help the workers who serve them every day, will they really help the millions of low-wage American workers who they don’t know or see?”

Olotara's surprising story highlights the fact that McDonald’s and other fast food chains aren’t the only restaurant companies whose low-paid workers need food stamps and Medicaid to get by. According to a new report "The Public Cost of Low Wages in the Full-Service Restaurant Industry" from the Restaurant Opportunities Centers United (ROC), the giant corporations operating or franchising full-service restaurants also cost taxpayers billions in public assistance for workers who are not paid enough to make ends meet.

The biggest offenders: DineEquity, which owns the IHOP and Applebee’s franchises, and Darden Restaurants, owner and operator of Olive Garden and six smaller chains. A single Olive Garden restaurant cost taxpayers almost $200,000 a year in public assistance subsidies to the workers who staff it, the report estimates.

Meanwhile, former Darden CEO Clarence Otis pulled in a cool $7 million in salary and other compensation in fiscal year 2014 (before he was forcibly retired). DineEquity CEO Julia Stewart made $6.6 million in 2014, a staggering sum but barely a quarter of the mind-boggling $24 million she raked in in 2012.

Working with these giant corporations to keep profits and executive salaries up by keeping wages for frontline restaurant workers down, is the National Restaurant Association, “the other NRA,” a lobbying powerhouse that has successfully kept the federal minimum wage for tipped workers at $2.13 an hour since 1991 and continues to oppose paid sick leave laws and the Affordable Care Act.

Full-service restaurant servers use public assistance at three times the rate of the rest of the workforce, says ROC founder Saru Jayaraman. With tips covering the vast majority of wages paid, and so many workers having to rely on public assistance to get by, restaurant corporations have succeeded in dumping a good portion of their labor costs onto customers and taxpayers.

Hoping to keep things that way, NRA lobbyists and restaurateurs flown in by the group from around the country took to Capitol Hill April 15 for the industry’s annual “grassroots” lobbying effort. They were there to pressure Congress to leave both regular and tipped-worker minimum wages untouched, head off momentum for federal paid sick days legislation, and curtail the ability of the National Labor Relations Board to enforce existing labor law.

On their way to The Hill, they were met by a spirited protest (youtube) from a number of organizations fighting for fair wages, including ROC, Jobs With Justice, Corporate Accountability International, and Food Chain Workers Alliance. Restaurant workers and advocates later testified at the Progressive Caucus forum: A Good Jobs Strategy For The Low Wage Economy (youtube).

DineEquity, owner and franchisor of the IHOP and Applebee’s brands, was estimated to benefit from $450 million in taxpayer subsidies to the low-paid workers of its franchisees. Darden, which directly employs workers in its restaurants, benefitted to the tune of $340 million. In 2013, Darden admitted that a full 20 percent of its 150,000 strong workforce was paid just $2.13 an hour.

The NRA is of course a lobbying colossus with a $70 million annual budget, 45 lobbyists and 200 staffers.

Low-wage restaurant jobs not only cost taxpayers money. They do nothing to boost local economies. In Oregon and six other states, the minimum wage for tipped restaurant workers is the same as it is for other workers. As Portland restaurateur Ron Toms points out, this means his staff makes enough to actually eat out sometimes, helping support the local restaurant economy.

Toms, a member of the Main Street Alliance of Oregon, a statewide network of local, independent small business owners, says, “When workers don’t earn enough to pay for the basics – to pay rent, to pay for child care, and yes, to go out for dinner once in a while – that’s bad for the whole economy.”

“If jobs pay so little that people can work a full eight-hour shift and still walk away without enough money to buy a dinner out, those jobs are not going to bring more customers into my business,” he adds.

California is another state with no separate, lower minimum wage for tipped workers, and home to some of the highest minimum wages in the country. Yet the NRA’s own data shows that restaurant jobs grew faster in California in 2014 than anywhere else in the nation. NRA chief economist Bruce Grindy reports California’s restaurant workforce has grown by more than 11 percent over just the last two years.

Toms and other restaurateurs are supporting ROC’s “One Fair Wage” campaign, to get rid of the separate tipped worker minimum wage. Sen. Patty Murray of Washington, another state with a thriving restaurant industry and no lower minimum wage for tipped workers, is expected to introduce legislation shortly.

Learn more about the "Other NRA's" long fight to keep wages low at Sourcewatch.org. CMD salutes Kathleen Kingsbury of the Boston Globe who won a 2015 Pulitzer this week for her coverage of restaurant workers fighting for a fair wage. Pulitzer judges lauded her for exposing “the real price of inexpensive menu items and the human costs of income inequality.”