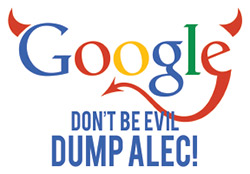 Google chairman Eric Schmidt said Monday that the" target="_blank"> American Legislative Exchange Council (ALEC) is "literally lying" that climate change is not a reality, and that its membership in ALEC "was some sort of mistake."

ALEC stated that it is "unfortunate to learn that the company had ended its membership." Over 80 companies have dropped their membership in ALEC since the Center for Media and Democracy launched ALECexposed.org in 2011.

"I'm curious to know if Google is still supporting ALEC," a caller to the show asked, given the group's promotion of climate change denial and Google's purported commitment to environmentalism.

"Um, we funded them as part of a political [campaign] of something unrelated," Schmitz replied. "I think the consensus within the company was that that was some sort of mistake and so we're trying to not do that in the future."

"And how did you get involved with them in the first place and were you, then, disappointed in what you saw?"

"Well, the company has a very strong view that we should make decisions in politics based on facts -- what a shock. And the facts of climate change are not in question anymore. Everyone understands climate change is occurring and the people who oppose it are really hurting our children and our grandchildren and making the world a much worse place. And so we should not be aligned with such people -- they're just, they're just literally lying."

Google confirmed in a statement to Bloomberg News that it won’t renew its ALEC membership at the end of the year.

Earlier this month, Google refused to respond to a letter from over 50 organizations asking it to drop its ALEC membership, as the Center for Media and Democracy (publishers of PRWatch.org and ALECexposed.org) reported last week. Google told the trade publication ARS Technica earlier this month "we aren't going to be commenting on this letter."

ALEC has long opposed most environmental regulation. It has promoted the repeal of Renewable Portfolio Standards and the approval of the Keystone XL pipeline, and its conferences have included presentations with titles like "Warming Up to Climate Change: the Many Benefits of Increased CO2." At its meeting last December, ALEC called on state legislators to engage in "Guerrilla Warfare" against the Environmental Protection Agency (EPA), and urged politicians to recruit their state attorney general to sue the EPA. ALEC is funded by an array of fossil fuel interests, including Koch Industries, Exxon Mobil, TransCanada, and Peabody Energy.

CMD first reported last year that Google was funding an array of far-right organizations, including many that actively promote climate change denial, such as ALEC and the Competitive Enterprise Institute, as well as the political arm of the Heritage Foundation, Heritage Action, which was largely responsible for the government shutdown. Google has also been a top donor to politicians like Texas senator Ted Cruz, who also denies the reality of climate change.

Just about everything going wrong with our country can be attributed to The KochAlec Effect! Greedy Lying Bastards!!!