Who Is Behind the National Right to Work Committee and its Anti-Union Crusade? | PR Watch

Who Is Behind the National Right to Work Committee and its Anti-Union Crusade?

- by Jay Riestenberg and Mary Bottari 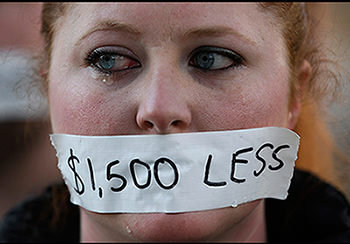 As the U.S. Supreme Court's 2014 session comes to a close, one of the major cases left for a decision is Harris vs. Quinn, which could affect millions of public sector workers in the United States.

The case originates in Illinois, where home health care workers have been successfully organized by public sector unions. Now, a small group of these workers, represented by lawyers from the National Right to Work Legal Defense Foundation, have sued and their lawyers contend that the agency fees, or the fair share dues that even non-union members of a bargaining unit are required to pay to unions that bargain for higher wages on their behalf, violate the First Amendment. Agency fees are barred in so-called "right to work" states, which have much less unionization and lower wages and benefits.

"the most important labor law case the court has considered in decades..."

Joel Rogers, a professor of law and sociology at the University of Wisconsin, calls it "the most important labor law case the court has considered in decades."

This is because when the Supreme Court decided to take on the case, the National Right to Work Legal Defense Foundation dramatically expanded the scope of the case beyond the home health care workers to include all public sector workers, from teachers and firefighters to sanitation workers to librarians. If the court follows National Right to Work's lead, every state in the country would essentially turn into an anti-union "right to work" state, which would be a significant blow to public sector unions' collective bargaining efforts and also complicate thousands of existing contracts between organized workers and municipalities, cities, counties, and states across the country. 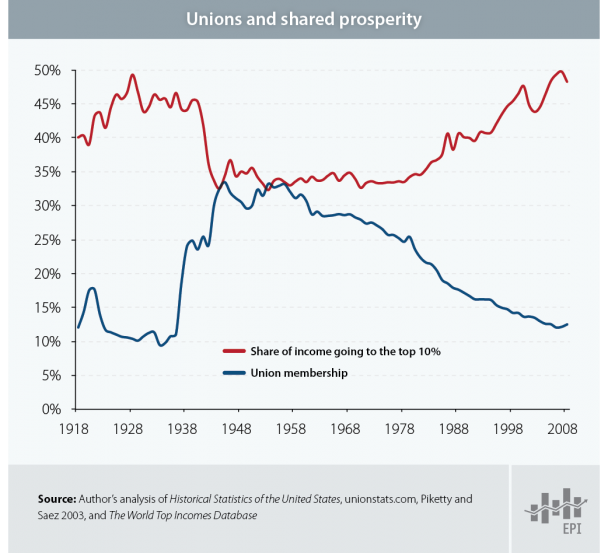 The National Right to Work Legal Defense Foundation (NRTWLDF) is the 501(c)(3) arm of the National Right to Work Committee (NRTWC), a 501(c)(4) organization. Additionally, the National Institute for Labor Relations Research is an affiliated anti-union research shop. Founded nearly 60 years ago, the NRTWC has been a national leader in the effort to destroy public and private sector unions. The groups have increased their funding and staffing in recent years. In 2012, the three groups combined reported over $25 million in revenue, making them a powerful instrument of the corporate and ideological interests that want to keep wages low and silence the voice of organized labor in the political arena.

NRTWC's success and the demise of unions in the United States has directly contributed to the erosion of high-paying middle class jobs and to growing inequality, as this chart from the Economic Policy Institute graphically illustrates.

The NRTWC has deep connections within the national right-wing network led by the Koch brothers. Reed Larson, who led the NRTW groups for over three decades, hails from Wichita, Kansas, the hometown of Charles and David Koch. Larson became an early leader of the radical right-wing John Birch Society in Kansas, which Fred Koch (the father of Charles and David) helped found. Several other founders and early leaders of the NRTWC were members and leaders of the John Birch Society, specifically the Wichita chapter of which Fred Koch was an active member.

The groups remain tied to the Kochs. In 2012, the Kochs' Freedom Partners group funneled $1 million to the National Right to Work Committee, while the Charles G. Koch Charitable Foundation gave a $15,000 grant to the NRTWLDF, which has also received significant funding from the Koch-connected DonorsTrust and Donors Capital Fund. Today, at least three former Koch associates work as attorneys for the NRTWLDF.

In June 2010, Mark Mix, the current head of the NRTW groups, attended the Kochs' exclusive Aspen strategy meeting to give a presentation on how to mobilize conservatives for the 2010 election, along with representatives from Koch-backed groups such as the Center to Protect Patient Rights (now called American Encore) and Americans for Prosperity.

In addition to the Koch brothers, the NRTWLDF has received significant funding from many big name conservative donors, including the Walton Family Foundation (of Walmart), the Coors family's Castle Rock Foundation, Wisconsin's Bradley Foundation, the John M. Olin Foundation, and the Searle Freedom Trust.

A $33 Million Anti-Worker Lobby Shop with Ties to ALEC, SPN, and More

In order to push their extreme agenda, the NRTWC has launched a massive lobbying effort at both the state and federal level. In the U.S. Congress alone, the NRTWC has spent over $33 million on lobbying between 1999 and 2013. NRTWC has lobbied Congress to pass a national "Right to Work Act," which is sponsored by Senator Rand Paul (R-KY). Paul has lent his name to several NRTWC advocacy and fundraising letters and received over $27,000 in campaign contributions from the NRTWC’s federal political action committee. The NRTWC also strongly opposed the Employee Free Choice Act, which would have made it easier for workers to organize, while supported legislation that would weaken the regulatory authority of the National Labor Relations Board over employers.

The NRTWC also does extensive lobbying on the state level. In 2012, lobbyists registered with the NRTWC were on the ground in Indiana and Michigan when both states passed anti-union "right to work" bills and are big supporters of Wisconsin Governor Scott Walker and his efforts to crush public sector unions. The NRTWC was an exhibitor at the 2011 annual conference of the American Legislative Exchange Council (ALEC), the corporate bill mill exposed by CMD in 2011. ALEC's "Right to Work Act," which has been in the ALEC library since at least 1980, is one of its most commonly used "model" bills. When Republicans took trifecta control of 26 state houses in November of 2010, it was a top agenda item at the December 2010 ALEC meeting. According to a 2010 email from ALEC to Wisconsin legislators that CMD obtained, ALEC referred to its "Right to Work Act" as a "solution… for your state's most pressing issues." Currently 24 states are so-called "right to work" states. In 2013, 15 states introduced legislation based on ALEC's "Right to Work Act."

The NRTWLDF is also an associate member of the State Policy Network (SPN), an $84 million dollar network of 64 state-based "think tanks." The State Policy Network's affiliate in Michigan, the Mackinac Center, was one of the major supporters behind "right to work" when the legislature passed the bill in 2012. Through its board, staff, and other activities, the NRTW groups also have close connections to Americans for Prosperity, the Cato Institute, the American Conservative Union, and the Republican National Committee.

From the beginning, the NRTWC had a focus on influencing U.S. elections. The NRTWC has spent millions in dark money electoral ads, including $7 million during the 2012 election. Although a leading group on the right, the NRTWC has also attacked Republicans such as John Boehner and Bob Dole for not adhering to their extreme policy agenda.

The NRTWC's long history of pushing the line in campaign finance and electoral activity as a nonprofit led to an FEC case against it at the U.S. Supreme Court in 1982, in which the court ruled against the NRTWC for illegally raising money for electoral activities. The NRTWC continued to engage in controversial campaign-related activities, and evidence suggests that the National Right to Work Committee spent $100,000 on private detectives in 1984 to infiltrate the AFL-CIO, NEA, and Walter Mondale's presidential campaign. By the time that case was brought to court, the statute of limitations had expired.

Today, the NRTWC continues to generate controversy for engaging in campaign related activities. In January 2014, the Center for Responsive Politics detailed whistleblower allegations that the NRTWC was running "a massive off-the-books mass mailing operation" attempting to influence the 2010 election in Iowa and possibly other states. The NRTWC did not disclose that it was participating in political activity that year to the IRS. The whistleblower also alleged that the NRTWC was coordinating its activities with candidates' campaigns during the election. Former IRS official Marcus Owens commented to the news outlet that "people have gone to jail for precisely the facts that you are describing." At the center of the controversy was then-NRTWC Vice President Doug Stafford, who is the former chief of staff for U.S. Senator Rand Paul (R-KY).

NRTWC Lawyers Push Their Agenda through the Courts

The legal arm of NRTWC was launched in 1968 to take the anti-worker agenda to the courts. With the Harris v. Quinn case, the NRTWLDF is seeking to re-litigate the Abood vs. Detroit Board of Education Supreme Court case it lost in 1977, which upheld the constitutionality of fair share dues. Over the years, the NRTWLDF has done little to improve wages, benefits, health or safety protections for American workers, but has tried scores of cases against unions and organized labor revealing its political agenda. With a large team of lawyers and millions in funding from national right-wing sources, the NRTWLDF is currently trying cases in Arkansas, Missouri, California, Michigan, Colorado, and Ohio.

NRTWLDF's also recently filed suit to block workers in the Volkswagen Chattanooga plant from voting for union representation and to prevent Volkswagen from voluntarily consenting to any future organizing drives.

Professor Rogers and other labor experts contend that the NRTWC's success in the U.S. Supreme Court "would be a disaster for labor, particularly for the public sector unions that traditionally rely more heavily on agency shop agreements." As Rogers points out, it is technically possible to form a union in a "right to work" state, but when union members are free to stop paying their dues, the union becomes a weak and ineffective organization. The results for American workers are clear. Research shows that "right to work" states have lower wages, less health care and more poverty.