-- by Marge Baker, People For the American Way. 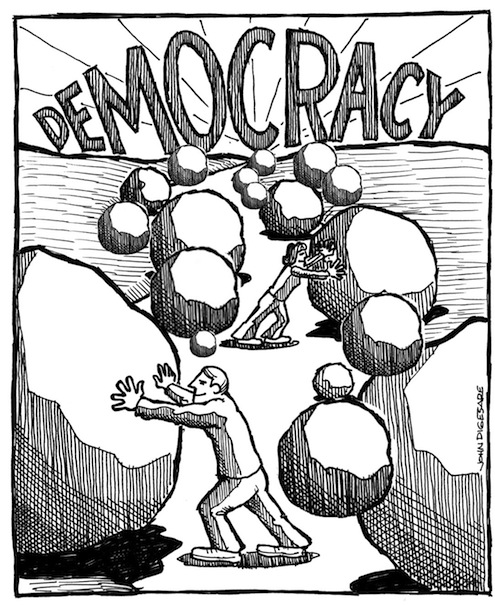 In the four years since the Supreme Court's infamous Citizens United v. FEC ruling, two things have become abundantly clear. Though the problem of money in politics can feel overwhelming, there are a number of workable solutions being considered federally and implemented in the states.

First, we have a major democracy problem. Citizens United paved the way for unlimited corporate spending to distort our elections. Staggering amounts of money have poured into our political system since the Court handed down that decision.

Second, and just as importantly, it's become clear that until we fix that democracy problem, it's hard to fix any problem. In other words, until we fix the funding of our political campaigns, we can't fix the individual issues that matter most to everyday Americans.

This has proven true across the board. Whether the issue you're most concerned about is making your community safer, guaranteeing that your family has access to clean water, or ensuring that workers get a fair minimum wage, when wealthy special interests can buy their way into the hearts, minds, and votes of elected officials, progress on these issues will continue to stall.

Clearly, when moneyed interests can spend virtually without limitation to influence our elections, they can set the political agenda.

The Citizens United ruling gutted the ability of Congress and the states to put common-sense limits on this runaway spending, and the effects haven't been subtle. In the wake of these campaign finance changes, outside political spending by Super PACs and other channels has reached an all-time high of $1 billion, the Associated Press found.

And now, a case currently being considered by the Supreme Court, McCutcheon v. FEC, could could allow even more money to flood our political system.

This isn't the kind of "democracy" Americans of any political background want. A recent poll shows that more than nine in ten Americans think it's important for elected officials to reduce the influence of money in our elections.

Though the problem of money in politics can feel overwhelming, there are a number of workable solutions being considered federally and implemented in the states.

Small-donor legislation is one good option. This type of law provides matching funds for small donations at a multiple ratio (such as 5:1 or 10:1). It also amplifies the effect of small donations, providing a way for them to carry real weight in political campaigns. That encourages political participation by people who may have felt before that their contributions didn't matter.

For candidates, small-donor public financing provides an alternative for those who don't want to be reliant on, and beholden to, wealthy special interests to fund their campaigns.

Another is the mandatory disclosure of political spending. Although Congress isn't likely to pass disclosure legislation anytime soon, many states are responding to the post-Citizens United spending bonanza by closing loopholes so that big, special interest donors can't hide behind "dark money" groups in elections.

Additionally, the year after Citizens United, a group of law professors asked the Securities and Exchange Commission to require publicly traded corporations to disclose their political spending to their shareholders and the public. Despite the proposal's immense popularity, the SEC recently took the corporate political disclosure rule (SEC File No 4-637) off its agenda. That agenda, however, isn't binding, and the SEC could -- and should -- still adopt the rule right away.

But most importantly, to fix our democracy problem, we have to be able to enact common-sense regulations on political spending. To fix the root problem -- in the absence of a change in who's on the Supreme Court -- we must amend the Constitution to undo the damage of Citizens United and other cases that have handed huge power to Wall Street and giant corporations.

City by city and state by state, the people are taking that power back. Sixteen states and more than 500 cities and towns have called on Congress to pass an amendment overturning Citizens United and related cases.

All of these solutions are steps toward a larger goal: putting our democracy back in the hands of "we the people," and fighting for a more transparent, vibrant democratic system responsive to the needs of everyday Americans.

This work is licensed under a Creative Commons Attribution-Share Alike 3.0 License.