"Money Out, Voters In" a New Joint Effort to Protect Democracy Is Launched | PR Watch

"Money Out, Voters In" a New Joint Effort to Protect Democracy Is Launched 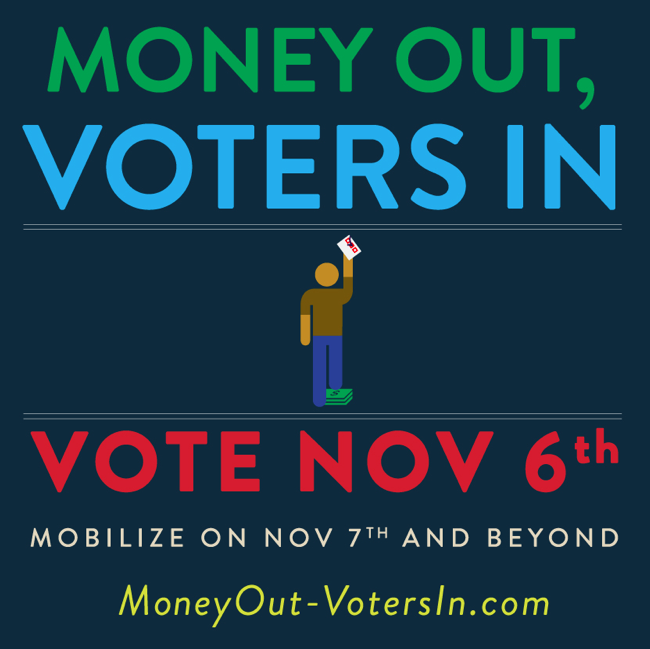 Within the next week, citizens in every state will come together to cast their votes for President, Congress, and other state and local offices. The right to cast those votes – to elect leaders who represent us – is at the heart of our democratic system. But this year, that right is in danger.

Our system of fair and free elections is under attack on multiple fronts. The Supreme Court's decision in Citizens United opened the floodgates for special interest money and corporate influence in politics. At the same time, a rash of voter suppression laws in more than 30 states has threatened to make voting difficult, if not impossible, for millions of Americans.

Throughout the history of our nation, powerful politicians and interest groups have tried to block eligible voters from casting a ballot. For much of the twentieth century, they used literacy tests or demanded poll taxes. Today they ask for photo voter ID, or create restrictive voter registration schemes. These laws, combined with the challenge posed by limitless corporate influence, strike at the very core of our democracy.

Our nation's history has been a journey towards true equality and the promise of a government of, by and for the people. Just as we have overcome many obstacles to achieve that promise, we are now committed to standing up against the pervasive, corrupting influence of an electoral system that auctions offices to the highest bidder and suppresses the vote of millions of Americans.

No matter what happens on November 6th, these threats must be addressed on November 7th and beyond. Together with our allies across the political spectrum, we pledge to fight for the rights of all voters in our nation and to move that much closer to creating a more perfect union. The future of our democracy depends on it.

More information is available at moneyout-votersin.com.

http://krugman.blogs.nytimes.com/2012/11/02/karl-roves-mission-accomplished/?smid=tw-NytimesKrugman&seid=auto <blockquote>Well, what if we’ve been misunderstanding Rove? We’ve been seeing him as a man dedicated to helping angry right-wing billionaires take over America. But maybe he’s best thought of instead as an entrepreneur in the business of selling his services to angry right-wing billionaires, who believe that he can help them take over America. It’s not the same thing."</blockquote> Not that fighting off the billionaire takeover is a done deal for progressives, but still...
1) The Right to Vote 2) Former Felon Voters 3) D.C. rights to vote 4) Representation via Constitution rules 5) Board of Elections 6) Campaign Finance Reform 7) Ballot Access 8) Ballot Access (non party) 9) Debate Access 10) Instant Run Off Voting 11) Verifiable Counting (paper) 12) National Popular Voting (no electorate) 13) Gerrymandering (neutral) 14) Media 15) Protesting 16) Bills (single issue) 17) Initiatives 18) Voter ID 19) Election day holiday 20) Congress to provide funds