Leaked audio from a donor summit suggests that David Koch's AFT may have violated its charitable status during the state's 2012 recall elections.

Freedom Partners (FP) -- a funding group previously unheard of before it shared exclusive and highly selective details about itself with Politico last week -- has extensive hidden connections to Koch Industries and to charities connected to Charles Koch, according to new research by the Center for Media and Democracy (CMD).

Republican lawmakers in Wisconsin are fast-tracking a controversial bill to keep political donors secret, enact voter ID, and limit early voting, among other measures, with a vote scheduled for next week. The only public hearing on the bill was held Tuesday, where a representative of the business lobby made several misleading assertions about the bill's disclosure provisions.

The Texas-based Tea Party group True the Vote is claiming they were one of the groups inappropriately "targeted" by the IRS since their application for charitable status has been delayed for years. Although many Tea Party groups were singled-out by the IRS for improper reasons, there may be good reasons for the agency to take a close look at True the Vote's application for charitable status, particularly given the group's involvement with the Wisconsin "Verify the Recall" effort.

Black voter turnout in the 2012 elections surpassed white turnout for the first time in history, despite -- or perhaps because of -- a concerted effort to enact new voter restrictions that would have disproportionately affected communities of color.

Sen. Bernie Sanders (I-VT) and Rep. Ted Deutch (D-FL) have introduced a new constitutional amendment to overturn the damage done by Citizens United, Buckley v. Valeo, and other judicial decisions that have diluted the role of ordinary people in American democracy.

The U.S. Supreme Court is hearing oral arguments on March 18 to decide whether an Arizona statute that imposes restrictions on voter registration conflicts with federal law. The case could potentially decide the balance between the state and federal governments when it comes to elections and voting rights. After becoming law in Arizona, the bill at issue was adopted as a "model" by the American Legislative Exchange Council (ALEC).

President Obama announced plans for a nonpartisan commission to "improve the Election Day experience" in his State of the Union address, a response to the long lines and heavy burdens that states imposed on voters during the 2012 elections. But his proposal -- which some have called "the policy equivalent of a sock drawer" -- falls short of what many had hoped.

The GOP's partisan redistricting process has come under renewed scrutiny in recent months, with gerrymandered maps helping Republicans hold Congress despite receiving fewer votes than Democrats, and state legislators discussing plans to rig the presidential election by awarding electoral votes according to those contorted boundaries. But out of all the states re-drawing Congressional boundaries along partisan lines after the 2010 elections, Wisconsin's gerrymandering may have been the most egregious. 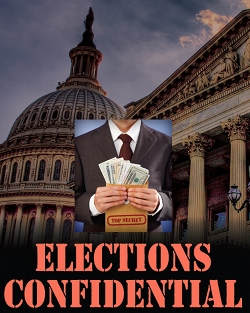 MADISON, WI — Mystery donors poured hundreds of millions of dollars into the 2012 elections via nonprofits and shell corporations, despite widespread public support for disclosure and decades of legal precedent supporting the public's right to know the sources of election-related spending.