Democracy is on the rocks in the West African nation of Senegal, where the streets have been the scene of violent clashes between police and protesters over a controversial presidential election. The riots, which have engulfed the nation over the past few weeks, erupted in response to incumbent President Abdoulaye Wade's quest for a third term -- which his opponents deem unconstitutional.

The controversy has manifested in demonstrations, predominantly in the capital city of Dakar, where at times thousands of Senegalese have rallied in opposition of the 85-year old president's bid. The protests began last year but have intensified since January, occurring every few days. This massive show of frustration is unprecedented for this sleepy nation on the edge of the African Sahel -- and has made outside observers question the future stability of the country.

As the nation is known internationally for its vibrant music scene, it comes as little surprise that the nation's musicians have been heavily embroiled in the calls for change.

The elections were held on February 26. After winning only 34.8 percent of the vote against 13 other candidates, Wade will now face a runoff election this month against one of his former prime ministers, Macky Sall. 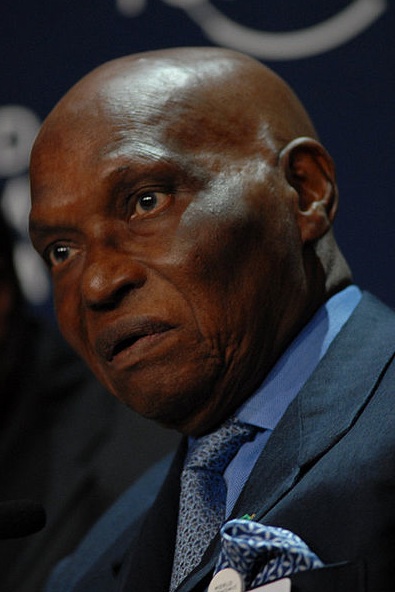 Wade came to power in 2000, his presidency pivoting the nation from 40 years of socialist rule into an age of neoliberalism. The following year, a new constitution was adopted that limits the presidency to two terms and shortens the length of each term. Wade has since argued that because he was elected before the implementation of this constitution, the constraints are not retroactive. With this reasoning, he went ahead and amended the constitution last year to allow him to seek a third term.

Beyond a popular opinion that the aging leader has worn out his stay at the presidential palace, Wade has also been criticized for other issues. Some of these include the rising cost of food and fuel, a 48 percent unemployment rate, high poverty, corruption and misappropriation of funds -- most notably a $27 million dollar statue Wade commissioned, for which he declared entitlement to 35 percent of fees paid by tourists for the statue on the basis of "intellectual property." Many also speculate Wade is positioning his unpopular son, Karim Wade, to take over the presidency following him.

Sall, a geologist by training, was at one point considered by many to be next in line to take over the presidency. Sall was removed from his position as Prime Minister to become president of the National Assembly in 2007. A year later, after Sall was critical of Wade's son, the president reduced Sall's mandate from five years to one. Sall left the party to form the political party Alliance Pour la Republique.

Sall has been campaigning on the promise that he will reverse the 14 constitutional amendments the president made to enhance the executive power. Sall has also said he would limit the presidential term and enforce a two-term limit. Some of his other promises include working to lower the price of foods and reducing the number of foreign embassies in the nation.

It is in this climate of economic stagnation and alleged manipulation of the country's constitution that the Senegalese people have grown frustrated. Wade has written off the opposition protests as a "light breeze which rustles the leaves of a tree, but never becomes a hurricane." The police have responded to the demonstrations with tear gas and rubber bullets. Although there is a stated ban on street protests, pro-Wade demonstrations have been allowed near the presidential palace -- a move that garnered international criticism. Similar to Egyptian protesters converging at Tahrir Square, the Senegalese protesters gathered at "Independence Square" -- which has since been made off-limits by the police. At least six people have been killed in the violence leading up to the election.

"The Senegalese don't want Wade any more. We are fed up, which is why this revolution has started," Omar Fall, a 23-year-old Senegalese man from the old colonial northern city of St. Louis, told the Center for Media and Democracy.

But those who have noticed improvements since Wade has come to office are not as quick to bid the octogenarian adieu. His supporters note that he has built hospitals, pre-schools and improved transportation infrastructure since he entered office. Wade has contended that he needs to stay in the presidency to finish several large-scale projects, including a new airport outside the capital city.

On January 27, the same day that the Senegalese Constitutional Court ruled Wade eligible to run, it also shot down the chance for internationally-renowned, Grammy-winning, Senegalese singer Youssou N'Dour to seek the office of president. N'Dour was the leading opposition candidate at the time. The members of the court -- all judges appointed by Wade -- ruled that 4,000 out of 12,000 signatures N'Dour presented were illegible. He needed 10,000. At a press conference following the decision, the musician -- who has sung with musicians like Tracy Chapman and Sting -- stated that "52 years of democracy had been thrown away." The court's decision further fueled the protests.

The denial of N'Dour's bid was criticized by the European Union election observation mission. "A candidate such as Youssou N'Dour, who had thousands of signatures backing his bid rejected, should have access to the files in order to look closely at why they were rejected, that is important," said Thijs Berman, the head of the mission.

N'Dour remained at the forefront of the protests after this decision, and now has thrown his backing behind Sall. He promised to re-launch his musical career -- put on hold for several months due to his engagement in politics -- if Sall wins. A concert will be held on April 4th, which is Senegal's independence day.

While the youth vote was crucial in sweeping Wade into office in 2000, the president has lost favor with this demographic over the years. A group of young rappers called "Y'en a Marre" -- French slang for "enough is enough" -- have been leading many of the protests in Dakar. The group began mobilizing the youth across the country in early 2011 in opposition to a third term for Wade.

The group composed an anthem for the opposition, "Abdoulaye Faux! Pas Force," or "Abdoulaye, don't force it, give up!"

"They're forcing our hands to be violent," Djily Baghdad, a founding member of the movement, told NPR. "As you see, all throughout Dakar, people are protesting -- burning tires on the streets, throwing rocks [and] blocking roads and stuff. So, that's the chaos Abdoulaye Wade wants to be; he's forcing us to be violent."

"Y'en a Marre" has been at the forefront of the opposition along with the M23 movement, which is a coalition of opposition and civil society groups.

The runoff election is scheduled for March 25th.

For extensive coverage of the protests visit Al Jazeera English or AllAfrica.com.