This week, CMD's new Food Rights Network sent letters to thirteen schools in the Los Angeles Unified School District (LAUSD) that have "organic" school gardens adopted by Hollywood's Environmental Media Association (EMA). As we reported in May, EMA teamed up with sludge-marketing corporation Kellogg Garden Products, which sells products made from Los Angeles area industrial and human sewage sludge with the label "quality organics" and which used the gardens for photo ops with sludge products.

Gardens in which kids grow vegetables and fruits were contaminated with sewage sludge as a result of EMA's partnership with Kellogg, which donated hundreds of cubic yards of sewage sludge products. EMA, which hosts its annual green carpet awards this Saturday, October 15th, has failed to take any steps to help remediate the children's "organic" gardens that were sludged.

In March, CMD sent a letter (pdf) to EMA founder Norman Lear and president Debbie Levin informing them that they were "unknowingly contaminating school children's gardens with sewage sludge." EMA's chief fundraiser, Levin was warned in the summer of 2010 (pdf) by the gardener who had first approached EMA about sponsoring the school gardens, LAUSD School Garden Program Specialist Mud Baron, that EMA's corporate partner Kellogg might be providing products containing sewage sludge (not labeled as such).

Levin responded (pdf) in April that "the EMA School Garden Program has never claimed to be 'organic.'" As CMD responded later that week:

This is a total fabrication. The EMA website is replete with only references to your gardens as organic. Even your funding appeals for corporate and public donations describe EMA's schoolyard gardens as only organic. Finally and most shockingly, the day after your wrote this false statement that you "never claimed" the gardens organic, an EMA celebrity was on E! Online extolling your organic gardens.

These and other references are documented on CMD's SourceWatch article on EMA. 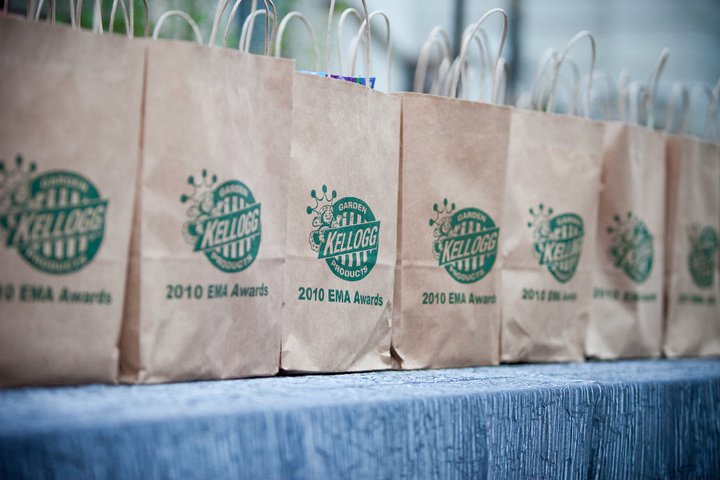 As PRWatch reported in July, not only has EMA president Levin stubbornly continued to support her donor, Kellogg Garden Products, but Kellogg's Chief Sustainability Officer, Kathy Kellogg Johnson, has also capitalized on the greenwashing provided to her family's brand by the EMA celebrities' association with it.

Kellogg has also made a variety of claims in an effort to spin the controversy:

Meanwhile, Children Continue to be Exposed to Contaminated Soil

As we reported in May, as part of these schools' partnership with EMA, they received from EMA an order form for Kellogg products -- including products made from sewage sludge, with no disclosure of that fact or that such products are barred from certified organic products -- in addition to whatever material Kellogg provided directly to the schools as part of the launch and photo ops of the gardens. We also documented that at least 192 two-cubic-foot bags of sludge-containing products were "donated" (pdf), and that schools often shared supplies.

In addition to the documentary evidence in the order forms, there are several photos of celebrities, students, and Kellogg representative Kathy Kellogg Johnson posing with open/used or closed bags of the sewage sludge-based products in publicity shots.

In May, we urged EMA to "immediately notify the schools, school children, and their parents, and EMA's donors who supported the organic school gardens that Kellogg's sludge products have contaminated." With schools on summer break, we held out hope that EMA would remediate gardens sludged by Kellogg when the fall semester began.

As this does not appear to have happened, we have notified the schools ourselves. Reportedly, EMA changed the order form provided to the schools to remove references to Kellogg's Amend, Topper, Gromulch, and Nitrohumus, but there is no indication that they actually took any steps to remediate any gardens that were sludged. And it seems EMA has doubled down with Kellogg by continuing to feature photos of the Kellogg logo with young Hollywood stars on its website promoting the garden program, despite the fact that Kellogg gave products the company and its spokesperson know full well are made from sewage sludge to "organic" school gardens.

As EMA hosts its annual Environmental Media Association awards ceremony tomorrow, with celebrities like Justin Timberlake being honored alongside the likes of Southern California Edison, all the while sponsored by such corporate brands as Earthbound Farm, widely known for its E. coli tainted spinach. While celebrities may believe that through EMA they are helping to advance  kids' organic gardens and other planet-healthy practices, it seems EMA is entrenching its role as a greenwasher for corporate sponsors, like Kellogg.

On the green carpet, will celebrities and EMA honorees again be offered gift bags from sludge merchant Kellogg Garden Products, like last year? Will EMA continue to get away with greenwashing sludge from one side of its mouth and rewarding celebrity activists, movies and corporations its respected "green" seal of approval with the other?

The sludge industry exploits school children and the needy in its relentless campaign to force sewage sludge "biosolids" on an unaware public. Kelloggs Garden Products donates Class A sludge compost contaminated with toxic industrial wastes to Los Angeles school gardens. Parents and children are not warned about the health risks of handling this substance, nor are they alerted to the fact that the plants and vegetables they grow uptake sludge pollutants. In Tacoma, Washington, the sewer authority donates Tagro Class A sludge biosolids to community gardens. Vegetables grown in the community gardens are given free to needy families who are not aware of the fact that vegetables uptake sludge pathogens and pollutants. In Pennsylvania, the sludge industry is teaming up with the Pennsylvania Dept. of Environmental Protection to utilize public school facilities to indoctrinate children into the alleged "benefits" of using sludge to fertilize vegetables and crops. Helane Shields, Alton, NH hshields@tds.net http://www.sludgevictims.com
Toxic Sludge is Good For You: Lies, Damn Lies and the Public Relations Industry http://www.amazon.com/Toxic-Sludge-Good-You-Relations/dp/1567510604 AND http://www.youtube.com/watch?v=yaMh8KGfkTM