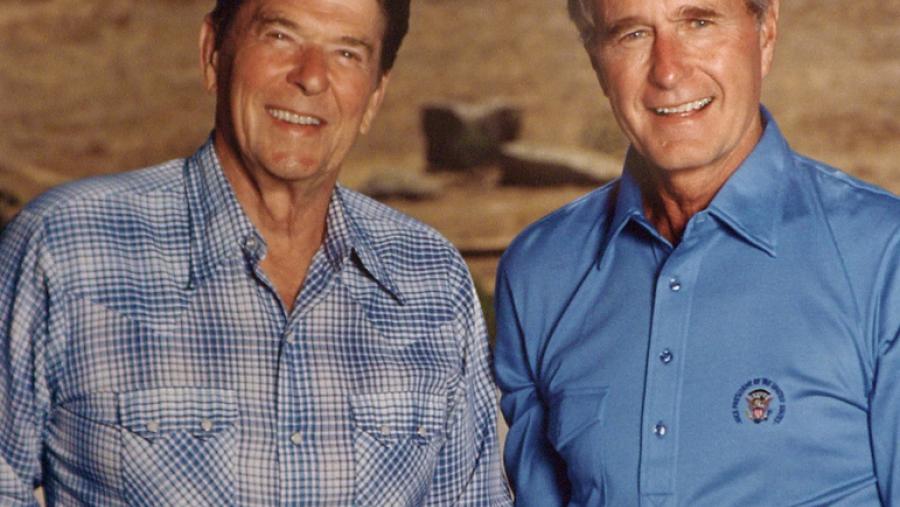 Republicans and right-wing media are in panic mode. They've spent weeks describing President Obama as an "emperor" or a "monarch" for using his executive authority to grant a reprieve to some undocumented immigrants -- and are now faced with evidence that Republican Presidents Ronald Reagan and George H.W. Bush did the same thing.

They are trying, and failing, to claim that Reagan's and Bush's uses of executive authority on immigration were different than Obama's. Here is what they get wrong.

In 1986, Reagan signed the last comprehensive immigration reform law to pass Congress. Although it gave up to 3 million unauthorized immigrants a path to legalization, the children and spouses of those eligible for "amnesty" still faced deportation. In 1987, Reagan used his executive authority to defer deportation for the children of legalizing immigrants, and in 1990, Bush expanded the reprieve to more children and spouses.

Republican commenters and right-wing media have tried to claim that -- in contrast with Obama -- Reagan and Bush were not going beyond Congress, but instead merely fixing an "unanticipated" gap in Congress' 1986 immigration law. David Frum at The Atlantic argues that Congress unintentionally omitted children and spouses from the law's coverage, and that Reagan's and Bush's executive actions merely "tidied up these anomalies." Mark Krikorian at the National Review claims that "Reagan’s and Bush’s moves were cleanup measures." The Heritage Foundation's Hans Van Spakovsky and John G. Malcolm argue that the Republican presidents were "carrying out the general intent of Congress."

They are wrong. Reagan and Bush used their executive authority to defer deportation for individuals that Congress had intentionally omitted from the 1986 immigration law.

“The law said nothing about legalizing children or spouses," the Chicago Tribune noted in 1990. "Although Congress considered including them, conservative groups who opposed letting more immigrants into the country derailed the idea.”

Congress "did not intend to place all illegal aliens within a legal status," the Reagan INS memo said, noting that the 1986 bill was controversial and likely would not have passed if children and spouses had been included. "There is nothing in these documents that would indicate Congress wanted to provide immigration benefits to others who didn't meet the basic criteria, including families of legalized aliens," the memo said.

"To the contrary," the Reagan INS memo noted, "the Senate Judiciary Comnittee stated in its report that: 'It is the intent of the Committee that the families of legalized aliens will obtain no special petitioning right by virtue of the legalization.'"

Despite the clear intent of Congress, the Reagan administration nonetheless declared it would exercise its "discretion by allowing minor children to remain in the United States even though they do not qualify on their own, but whose parents (or single parent in the case of divorce or death of spouse) have qualified" for legalization under the law.

In other words, Congress passed an immigration law that expressly excluded a large group of people from its protections -- and for reasons of fairness and family unity, Reagan and Bush chose to protect them anyway.

This is directly contrary to the assertions of the National Review, and the Heritage Foundation, and the Federalist Society, and David Frum, and undermines their primary argument for why Obama's use of his executive authority is distinguishable from similar executive actions by Reagan and Bush.

Frum claims that, in contrast with Republican presidents, Obama is "acting on his own authority and in direct contravention of the wishes of Congress."

Yet the same could be said for the Republican presidents -- particularly President Bush.

Similarly, in 2013 the Senate passed an immigration reform bill, and House Speaker John Boehner declined to bring it to the floor (although the bill would likely pass if the House did vote). Obama's executive action implements the provisions of the Senate bill, although around twice as many people would be affected if the bill became law.