Attorney General JB Van Hollen is seeking to appeal last Friday's order halting implementation of Governor Walker's union-busting bill. While the trial court found that the bill's rushed passage likely violated state Open Meetings laws, the Court of Appeals is being asked to consider whether that decision conflicted with separation of powers principles.

As CMD has reported, on March 18 Dane County Judge Maryann Sumi found that legislators had likely violated Open Meetings laws by providing inadequate notice for the March 9 Joint Conference Committee meeting and subsequent Senate vote that amended and passed Gov. Walker's controversial bill. In making her decision, Judge Sumi noted that the law states "any actions taken at a meeting of a governmental body held in violation [of Open Meetings law] are voidable," provided that the District Attorney brings the suit and the public interest in voiding the bill outweighs any public interest in upholding it. Sumi emphasized the Constitutionally-recognized public interest in ensuring open government, stating "we are entitled by law to free and open access to governmental meetings, and especially governmental meetings that lead to the resolution of very highly conflicted and controversial matters."

Amidst the ongoing labor struggle in Wisconsin and national efforts to cut programs while giving breaks to business, the race for a swing vote seat on the Wisconsin Supreme Court has heated up.

With recently-released emails suggesting Prosser has contributed to discord on the state's highest court, Prosser recommended that greater civility could be achieved with "outside studies," and Kloppenburg questioned whether animosity between justices could cloud the decisionmaking process. She asked, "are judges making decisions based on law, or based on personal animosity?" Throughout the debate, Prosser circled back to ads being run against him by the group Greater Milwaukee Committee pointing out he did not prosecute a pedophiliac priest when Prosser was a District Attorney. "This is the worst ad ever run in a judicial campaign," he said. Both sides brought up ads run against former Supreme Court Justice Louis Butler by current Justice Michael Gableman that made the ludicrous suggestion Butler found a "loophole" to free a rapist so he could rape again (Butler was appointed the case as a public defender, got a new trial but lost at the Supreme Court, and the man served his entire sentence). While Prosser joined the half of the court that refused to censure Gableman for the ad, Prosser subtly compared it to the "pedophiliac priest" ad to turn the tables. Kloppenburg pointed out that the ads against Prosser were run by a third-party group, whereas the Gableman ads were produced by his own campaign. Nonetheless, Kloppenburg declined to ask the Greater Milwaukee Committee to take down their ads when challenged to do so by Prosser. The debate flowed into a discussion of campaign disclosure rules, an issue especially relevant in light of challenges to the state elections board expanding disclosure regulations. A case on this matter is currently pending before the Wisconsin Supreme Court and the Center for Media and Democracy has submitted an amicus brief in favor of increased disclosure. Even though the U.S. Supreme Court favored disclosure in its Citizens United decision, right-leaning groups making expenditures in the 2010 midterm elections benefitted from secrecy, suggesting that disclosure considerations would be a right-left issue. However, when asked about disclosure, Prosser suggested he would favor it, stating "I want to know who is smearing me in that third-party ad!" 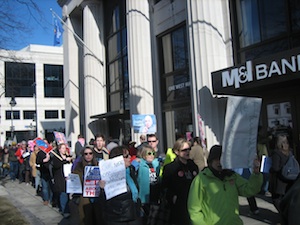 Republican state Senator Randy Hopper now knows exactly what it feels like to have his dirty laundry aired for the world to see. It's not pretty.

The two-year senator from Fond du Lac, Wisconsin is in the midst of efforts to recall him from office for his actions against worker rights and fair procedures, and the Milwaukee-based WTMJ-TV has received a letter from his estranged wife accusing him of having an affair with a young woman he supervised. In the Wisconsin Senate, Hopper serves on the "Children and Families and Workforce Development Committee."