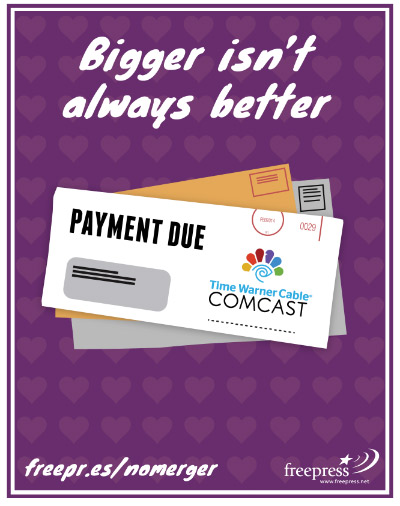 As Comcast moves forward with its plan to take over Time Warner Cable, their legislative agenda is facing greater scrutiny. As CMD has documented, both Comcast and Time Warner Cable are funders of ALEC, a corporate bill-mill where corporations and state lawmakers vote behind closed doors on bills that benefit the corporations' bottom line, often at resort meetings where legislators are wined and dined at corporate expense.

As detailed in CMD's November 2013 report, "Exposed: The State Policy Network -- The Powerful Right-wing Network Helping To Hijack State Politics and Government," the State Policy Network is a network of 64 right-wing "think tanks" -- which CMD dubbed "stink tanks" -- that was founded in part by ALEC. These in-state special interest groups push largely the same national corporate-backed agenda of ALEC in state legislatures.

CMD has uncovered that a number of ALEC's funders are also funding SPN and its network of think tanks -- including Comcast, Time Warner Cable, AT&T, Microsoft, Verizon, and Facebook. Other SPN funders include large corporations and right-wing CEO families like the Koch brothers' family fortune, the Bradley Foundation, and the Walton family.

Perhaps more than any other SPN affiliate, the Washington Policy Center (WPC) has been the leading the stink tank network on telecom issues. WPC is ALEC's state chair in Washington and has had a seat on ALEC's Communications and Technology Task Force along side Comcast, AT&T, Facebook, Yahoo, and Yelp.

A corporate representative of Microsoft currently sits on WPC's board of directors. Throughout its history WPC has published posts and reports that specifically favor Microsoft, including on a 2004 European Union against Microsoft and a 2001 U.S. federal case alleging Microsoft was an illegal monopoly.

WPC has launched a "Technology & Telecom Project," where it publishes reports that support lowering taxes on telecoms corporations and oppose the FCC's regulations of the telecom industry. In September 2012, WPC President Dann Mead Smith and John Stephenson, director of ALEC's Communications and Technology Task Force, teamed up to write an op-ed in The Seattle Times claiming that FCC regulations were stopping "rural Washington's farmers, students, and small business owners" from receiving broadband access.

The Washington Policy Center has also led SPN's Tech/Telecom Policy Exchange, a monthly online publication providing updates on telecom policy from SPN and the stink tank network. The materials in the "exchange" often include articles and blog posts written by SPN affiliates and aligned organizations calling for the deregulation of the telecom industry, advocating against municipal broadband, and pushing for tax cuts that would benefit telecom and tech corporations.

Their August 2013's exchange included information pointed against FCC regulations and another group of posts focused on "keeping the internet free of taxes," despite the budget difficulties many states face and how many brick and mortar small businesses have been crushed by online merchants like Amazon that are not required to impose state sales taxes in general.November/December 2013's exchange reveals that WPC leads monthly group conference calls on the issue, and again includes posts against FCC regulations on telecom corporations.

Just as lobbyists for corporations like Comcast, Time Warner, Verizon, and AT&T vote behind closed doors with lawmakers on "model bills" at ALEC, corporate executives from Comcast and Time Warner Cable recently presented at a closed-door session at the State Policy Network's September 2013 conference in Oklahoma City. The session, titled Technology: A Freedom Frontier, focused on limiting democratic regulation of the telecommunications industry.

The panel was moderated by WPC President Dann Mead Smith and speakers included Susan Patten (VP of Government Affairs at Time Warner Cable), Mike Rose (Senior Director of External Affairs at Comcast), Matt Tooley (Senior Director of Broadband Technology at the National Cable and Telecommunications Association), and John Stephenson (ALEC's Communications and Technology Task Force Director). Additionally, according to SPN's conference website, representatives from the Kochs' Americans for Prosperity, the Franklin Center for Government Accountability, and several other SPN affiliates were in that session.

Other Stink Tanks Get in on the Action

WPC is not the only SPN stink tank active on telecom issues. Over the years, several SPN affiliates have pushed policies that would benefit the network's big telecom corporate funders, including:

It is unclear how much big telecom corporations have funneled into the stink tanks network. Based off a document of SPN's 2010 funders CMD has uncovered, AT&T contributed between $25,000 to $99,000 to SPN in 2010, while Comcast, Time Warner Cable, and Verizon all contributed between $5,000 and $25,000 each in that year. Last year both Comcast and Time Warner Cable were sponsors of SPN's September 2013 conference in Oklahoma City.

Although SPN and its affiliated think tanks are not required to disclose their donors, a list of 2010 corporate and individual contributors of the Texas Public Policy Foundation, one of SPN's Texas affiliates and one of the largest SPN stink tanks in the country, provides insight into the big telecom funding behind the stink tanks network. In 2010 alone, that Texas stink tank received funding from AT&T, Verizon, and Time Warner Cable totaling at least $133,950.

Thanks for the article but its hopeless. How depressing.
It sure is, and I don't think there is much a regular person can do about it unless they had aillion dollar check written out for a legislature.