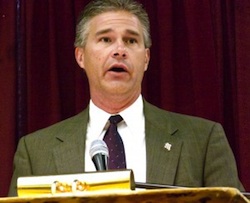 Madison -- Wisconsin Attorney General J.B. Van Hollen has taken the unprecedented step of asserting that a state legislator cannot be held accountable for refusing to disclose public records in response to a lawful open records request by the Center for Media and Democracy.

Van Hollen's department asserted in court filings that Wisconsin Senator -- and American Legislative Exchange Council (ALEC) national treasurer -- Leah Vukmir cannot be served with a court order demanding that she comply with her legal responsibilities under the open records law.

This novel legal argument reverses the policy and practice of prior Attorneys General and would make any state legislator immune from enforcement of the state open records law and any other civil matter.

"Because the current practice of the legislature is never to be out of session, the Attorney General's position means that state legislators can't be held accountable for refusing to comply with their duties under the open records law. This is a radical departure from the clear language of the law, from the position taken by previous Attorneys General, and from Wisconsin's long, proud history of transparency and commitment to open government," said Brendan Fischer, General Counsel, Center for Media and Democracy.

A Wisconsin Constitutional provision from 1848 gives legislators limited immunity from arrest or civil process "during the session of the legislature," which at the time only lasted for a few weeks or months. But today, the legislature remains in session continuously, even during recess, for a full two years. The same day that one session ends, the next one begins. Van Hollen's position would close off any possibility of enforcing any civil action against a state legislator.

The Attorney General's office has previously argued that the provision only applied during "floor session," but is now reversing precedent and essentially arguing that a legislator can never be held accountable for defying the open records law. This position, if upheld by the court, would reverse decades of history and practice and effectively dismantle Wisconsin's public records law as it applies to the state legislature.

The Center for Media and Democracy filed suit against Senator Vukmir in June for her failure to release ALEC-related public records. Senator Vukmir is ALEC's national treasurer. She attended ALEC's Oklahoma City meeting in May 2013 and sponsored an ALEC "model" bill that was adopted by ALEC politicians and corporate lobbyists as ALEC policy. Now she is asserting she does not have a single record relating to the bill or the Oklahoma meeting responsive to CMD's routine request.

"Senator Vukmir is acting like she is above the law, but Wisconsin's open records laws have always applied to legislators. I've seen her at ALEC resort meetings and cigar parties, and we have documented that as a state elected official she has sponsored numerous ALEC bills secretly voted on by corporations and politicians. We have uncovered that she has received thousands of dollars in ALEC 'scholarships' for these trips, and now she is trying to keep ALEC's communications with her secret from the people of Wisconsin by claiming no citizen of the state can enforce civil laws against legislators. What is she really hiding?" added Lisa Graves, CMD's Executive Director, who formerly served as a senior advisor in all three branches of the federal government.

The Wisconsin State Journal reported on how Senator Vukmir's staff berated and physically assaulted a process server trying to routinely serve the legislator with a court order. The process server's sworn affidavit filed with the court can be viewed here.

The lawsuit arose in part because ALEC has been stamping its documents with an extraordinary "disclaimer" asserting that documents it sends to legislators are not subject to any state's public records law, and distributing bills and other material via an Internet dropbox, which makes the records more difficult to access through open records. ALEC admitted to the Wisconsin State Journal in June that these tactics are part of the organization's effort to evade open records laws.

For more on this, see:

The Koch brothers must be stopped and those legislators who are enabling them or we will have a war to take our own country back!
I think that is what we are coming to. Another Syria. Our rights are washing down the drain.
folks in wisconsin should send stuffed lap dogs to this elected representative. She is a lap dog of the corporate elite and yet she thinks she is a leader at ALEC.
These people are fascists.
I think the US AG, Eric Holder, should investigate and eventually prosecute ALEC and its members for posing as legally elected lawmakers in the various states they exist. It's fraudulent behavior in my view. They should be prosecuted for making laws that no one can seem to get to to review before they are enacted by state legislators. There's no debate. That's the way conservatives think government should work. Is this not one of the major reasons people came to this country in the first place? They could not live in the deplorable conditions the rulers (kings, queens, dictators) pressed on them. Now it seems that many in conservative ranks want to return us to centuries old practices that only aid the wealthy!
This issue will NOT receive an impartial evaluation in Wisconsin. It needs to be heard by a higher court. The Wisconsin AG is too much under the finger of our governor.
It's name is ALEC and it is in the legislature.
WAKE UP AMERICA! No Right Minded American but the millionaires and billionaires "Loyalty Oath Signing Legislators" want this ! A bunch of these ALEC “Loyalty Oath Legislators” folks are meeting on December 7th at Mt. Vernon to begin to rip apart the U.S. Constitution (yes even further than they have) ! See Brian Howey's Column on this issue at: howeypolitics.com/Content/HPI-News/HPI-News/...Long.../10497