Under growing public pressure and the departure of multiple corporate members, the American Legislative Exchange Council (ALEC) has announced it is disbanding the Task Force that has been responsible for some of the organization's most controversial pieces of legislation. Wisconsin Governor Scott Walker introduced several bills approved by that Task Force when he was a legislator in the 1990s and early 2000s. 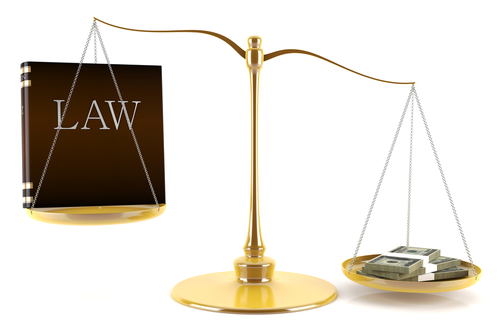 For at least three decades, the corporations, special interest groups, and legislators on the ALEC Public Safety & Elections Task Force (known as the Criminal Justice Task Force until 2009) have approved model bills that promote for-profit prisons and lengthen prison sentences, criminalize immigrants, expand the "war on drugs," thwart evidence-based pre-trial release programs in favor of for-profit bail-bonding, and many other policies.

In recent weeks, ALEC has been under increasing scrutiny for that Task Force's role in advancing laws that promote voter suppression, and for adopting the so-called Stand Your Ground law, which in Florida had been cited to prevent the prosecution of the man who shot and killed Trayvon Martin.

As the result of a campaign by the Center for Media and Democracy (CMD), Color of Change, Common Cause, People for the American Way, CREDO, and others, a stampede of ALEC member corporations have announced they are severing their ties from the organization.

ALEC had been replying to the campaign with a series of increasingly frantic press releases, bemoaning what they called an "intimidation campaign."

As Mark Schmitt of the Roosevelt Institute notes in the New Republic, "[f]ar from 'intimidation,' what the boycott threat did was force the companies to make a more careful, deliberate choice about what kind of political speech it actually wanted to support and put its reputation behind." And companies like McDonald's, Coca-Cola, Kraft Foods and others apparently do not want to be associated with policies like those coming out of the Public Safety & Elections Task Force.

ALEC's responses to the campaign also claimed that "ALEC policies promote 'economic vitality.'" But many noted that it was hard to see how policies like Stand Your Ground and voter suppression promoted "economic vitality."

Apparently in response to the corporate exodus, and to the contradictions between ALEC's stated mission and its policies, the organization issued a press release today stating they are "eliminating the ALEC Public Safety and Elections Task Force that dealt with non-economic issues" and that they would be "redoubling our efforts on the economic front."

ALEC's announcement is a partial victory for the power of grassroots citizen action, but for Americans concerned about brand-name corporations underwriting ALEC's extreme agenda to make it more difficult for American citizens to vote and to protect armed vigilantes, ALEC's PR maneuver to try to distance itself from its record of extremism is an empty gesture unless it and the corporations that have bankrolled its operations work to repeal ALEC-backed laws that have advanced the NRA's agenda and that will impede citizens from voting in the coming elections.

As CMD has reported, the NRA conceived the so-called Stand Your Ground law in Florida, promoted its passage, then brought it to the ALEC in 2005, where the legislators and corporate lobbyists on the Criminal Justice Task Force voted unanimously to adopt it as a "model bill." At the time, Wal-Mart was the Task Force co-chair, and the NRA led the Task Force in subsequent years. Since becoming an ALEC model it has become law in dozens of other states, and the number of homicides classified as "justifiable" has dramatically increased in many states (and jumped 300 percent in Florida). In 2009, members of the same Task Force approved the model "Voter ID Act", versions of which were introduced in a majority of states in 2011.

While these bills have attracted the most attention in recent weeks, the Criminal Justice / Public Safety & Elections Task Force has been advancing a variety of other controversial policies since the late 1980s.

Members of the Task Force have included for-profit prison providers like Corrections Corporation of America (CCA), which has also served as the co-chair. The ALEC Criminal Justice / Public Safety & Elections Task Force has created model bills that lengthen sentences, which have dramatically increased incarceration rates, and bills that privatize prisons, putting more of those inmates under the control of for-profit corporations, as well as many other policies.

Scott Walker was a proud ALEC member when he was in the state legislature, and introduced several ALEC bills approved by the Criminal Justice Task Force. Since becoming governor, he has continued to push these ALEC-supported "criminal justice" efforts.

In 1997, then-Representative Walker introduced (and the legislature passed) the ALEC Criminal Justice Task Force - approved "Truth in Sentencing" act, which requires inmates to serve their full sentence without options for parole or supervised release. The law takes away incentives for prisoners to reduce prison time through good behavior and participation in counseling, and eliminates the ability for judges and parole boards to decide that the financial and social costs of keeping a particular person incarcerated no longer furthers public safety goals.

The state estimated that the first 21 months after the law took effect would cost taxpayers an extra $41 million, as 990 inmates would have to be incarcerated for an additional 18,384 months. Wisconsin's prison population increased 14 percent in the seven years after the law took effect, with no correlative public safety benefit or additional decline in crime rates. The annual budget for the state prison system jumped from $700 million in 1999 to $1.2 billion in 2009, becoming the third-largest expenditure in the 2009-2011 state budget.

During this period of growing prison populations, then-Representative Scott Walker introduced several bills between 1997 and 1999 that would allow private prisons in Wisconsin, including one to privatize state prison operations (see the ALEC bill here), and another allowing private corrections companies to open prisons in Wisconsin to house inmates from other states (see the ALEC bill here). Walker noted in 1998 that CCA wanted to expand into Wisconsin. While those bills did not pass, some inmates were contracted-out to private prisons in other states, and CCA has registered lobbyists in the state ever since.

"Clearly ALEC had proposed model legislation," Walker told American Radio Works in 2002 (although there was no reference to ALEC when the legislature was considering the bill). "And probably more important than just the model legislation, [ALEC] had actually put together reports and such that showed the benefits of Truth-in-Sentencing and showed the successes in other states. And those sorts of statistics were very helpful to us when we pushed it through, when we passed the final legislation," Walker said.

Those statistics, though, were critiqued by criminologists as unreliable and intended to persuade rather than educate: Walker said that he and fellow ALEC members relied on an ALEC report crediting Virginia's Truth-in-Sentencing law with a five-year drop in crime, but crime dropped in ALL states in the 1990s, regardless of whether a state passed a tough-on-crime law like Truth-in-Sentencing.

The Wisconsin state legislature apparently recognized the folly of Truth in Sentencing and rolled-back aspects of the law between 2001 and 2009. When Scott Walker became governor, he reversed this progress and pushed for legislation fully restoring the ALEC Truth in Sentencing, despite the costs to taxpayers and despite claiming Wisconsin was "broke." In early July, Governor Walker's office released a statement supporting expanded use of prison labor, another idea promoted in ALEC bills approved by the ALEC Criminal Justice Task Force.

Another policy approved by the now-disbanded ALEC Task Force includes Arizona's controversial SB1070 immigration law, which is currently being challenged before the U.S. Supreme Court.

DBA Press / In These Times documented how Arizona Republican Rep. Russell Pearce collaborated with CCA and other members of the ALEC Public Safety and Elections Task Force in December 2009 to create the ALEC "model" immigration bill that became SB1070.

Before the ALEC meeting, for-profit prison operator CCA had identified immigrant detention as a profit center important for its future growth, stating it anticipated receiving "a significant portion of our revenues" from detaining immigrants. Even a hedge fund with a big stake in CCA was touting immigration detention as proof CCA would be profitable.

An immigrant contesting their deportation can wait up to a year for a hearing, even though many of those detained have not committed a crime and have no criminal record. Immigrant detention can cost taxpayers $122 a day. Because for-profit corporations operate about half of all immigrant detention facilities, these taxpayer dollars flow into the pockets of CCA and other for-profit prison providers.

The for-profit bail bond industry's trade association, the American Bail Coalition (ABC), is an ALEC member and was also on the Task Force that passed the ALEC anti-immigrant laws. An immigrant facing removal in some cases may be released on bond, and will often pay a commercial bail bondsman for their release. Immigration bonds are usually between $5,000 and $10,000, and can be much higher, so a for-profit bail bondsman who accepts 10 percent of that bail as a nonrefundable fee can rake in significant profits for doing very little.

At the time ALEC approved the "No Sanctuary Cities for Illegal Immigrants Act", the chairman of the ALEC corporate Private Enterprise Board was ABC general counsel Jerry Watson. Watson was very familiar with the profits that can be made by collecting bail bonds from detained immigrants. His law firm biography lists him as "specializing in the field of ... immigration bonding."

ABC has called ALEC the industry's "life preserver". ABC pays for ALEC membership, and a representative sits on the ALEC "Private Enterprise Board" as well as ALEC's Executive Committee. The trade group boasts that "during its two decade involvement with ALEC, ABC has written 12 model bills fortifying the commercial bail industry" that were passed by the Criminal Justice / Public Safety & Elections Task Force.

ALEC has come under increased scrutiny over the past year after the Center for Media and Democracy released its ALEC Exposed Project, which revealed and analyzed more than 800 previously-secret "model" bills voted on by corporate or special interest lobbyists and politicians.

In response to the growing scrutiny in recent weeks, ALEC also claimed that "America needs organizations like ALEC to foster the discussion and debate of policy differences in an open, transparent way." But as CMD and others have documented, ALEC Task Force meetings are closed to the press and public and take place behind closed doors.

The above photograph is courtesy of Shutterstock Images.

While ALEC is dangerous to the rights of the Citizens, why are we not also going after the Senators who are accepting Corporate money in exchange for their support in Legislating the agendas of Private Interest Groups? Lobbying is at the center of all the troubles we are experiencing as a Nation. In the Private Sector, Lobbying would be considered Bribery. Bribery is illegal.
Not mentioned in the article is ALEC's role in limiting public broadband options. The top 5 Internet Service Providers are all ALEC members in elevated positions. Comcast, Time Warner, Verizon and the others already realize oligopoly gross margins in broadband service in excess of 90%. American consumers are paying $40 and more each month for a service that cost the ISP less than $2 to deliver. ALEC is a principal vehicle through which they coordinate their oligopoly and block competitive entry. ALEC has promulgated such model bills as the Fair Competition Act which (Surprise!) is designed to limit competition for the ISP incumbents.