SourceWatch citizen journalist Artificial Intelligence (AI) is a dogged and prolific investigator of the pro-war lobby. AI began digging into the pro-war front group Vets for Freedom in June 2006. AI's research exposing the neoconservative agenda and Republican operatives behind VFF has been used by scores of journalists. Just do a Google search for "Vets for Freedom" and you'll find AI's work in our SourceWatch article right at the top of your returns, next to the VFF's own website.

Pro-war funding appears plentiful for VFF as it gears up to lobby Congress in September. Here's some of the latest from AI and the VFF article on SourceWatch:

A lawsuit against airservices company Jeppesen Dataplan, Inc., has been re-filed to include two more victims of the U.S. Central Intelligence Agency's extraordinary rendition program. In December 2002, Bisher al-Rawi was kidnapped from Gambia and flown to a secret U.S.

Asked by Congressman Dennis Kucinich whether the Rendon Group was involved in a Department of Defense media management strategy on the war in Iraq, the former Secretary of Defense,

In preparing its marketing study commissioned by the U.S. military, the RAND Corporation sought the advice of PR advisers including Burson-Marsteller, Weber Shandwick, J.D.

"For the past five years," Sami al-Haj, a cameraman for Al Jazeera, "has been the only journalist known to be held in Guantánamo Bay," reports Rachel Morris. Al-Haj was originally detained in December 2001 while trying to cross the border into Afghanistan with a team of other journalists. After examining his case, Morris can find little evidence to justify his detention.

The detention and subsequent charging of an Indian-born doctor, Mohamed Haneef, under draconian anti-terrorism laws has turned into a PR nightmare for the Australian government. The Australian Federal Police (AFP) charged Haneef with providing support to a terrorist organization, claiming that he had provided a mobile phone SIM card to a relative who had it with him when he recently crashed his car into Glasgow airport terminal. The AFP subsequently conceded that the SIM card was with another relative hundreds of kilometers away at the time of the airport attack.

One of dozens of As Sahab videos available on YouTube.

The pro-war front group Move America Forward has announced that it will caravan across the United States September 3 - 17 on a trip to DC to lobby for the war in Iraq.

According to a new poll by Newsweek, "Even today, more than four years into the war in Iraq, as many as four in 10 Americans (41 percent) still believe Saddam Hussein's regime was directly involved in financing, planning or carrying out the terrorist attacks on 9/11, even though no evidence has surfaced to support a connection. A majority of Americans were similarly unable to pick Saudi Arabia in a multiple-choice question about the country where most of the 9/11 hijackers were born. Just 43 percent got it right -- and a full 20 percent thought most came from Iraq." 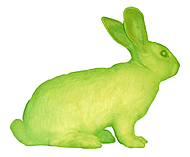 Eduardo Kac's "GFP Bunny"
Slate magazine has an online slide show this week about "bio art" — in which people use genetic manipulation to insert coded messages into DNA, or produce a transgenic rabbit using a gene derived from a jellyfish that makes it glow fluorescent green.

I was a little disappointed, though, that Slate failed to mention the work of Steve Kurtz, a bio artist whose work goes further than most in provoking debate about the ethical issues involved with genetic engineering — so far, in fact, that he is currently awaiting trial on charges that could land him in prison for 20 years.