In the Center for Media and Democracy's break-through article on the American Action Network, we highlighted the resumes of the billionaires, corporate executives, and right-wing political operatives behind the group. Americans have a right to know more about who these guys really are, starting with AAN board member Robert Steel.

A few weeks ago, we broke the story of the grossly misleading American Action Network attack ad accusing Wisconsin Senator Russ Feingold of creating the federal deficit. We pointed out how such claims are preposterous considering that those behind AAN and the anti-Feingold ads helped destroy the economy, and that some of AAN's board members benefited personally from the Wall Street bailout spearheaded by the Bush Administration. The Washington, D.C.-based group, a 501(c) organization that receives anonymous corporate funding, has already spent $750,000 attacking Senator Feingold in television ads. Now, AAN is at it again, airing another misleading attack ad making similar claims.

Republicans conjure the Founding Fathers when defending secret corporate spending in elections, pointing out that The Federalist Papers, a series of essays originally published in newspapers, were written anonymously. Considering right-wing claims of constitutional scholarship, it is surprising that they cannot come up with something more compelling than this isolated example, much less an example at all related to corporate, rather than individual, speech. Besides, there is no way to know whether James Madison would have sided with the East India Company's "right" to secrecy if it were buying newspaper ads attacking the ratification of the Constitution.

Ads being run by the U.S. Chamber of Commerce contain demonstrably false distortions of truth and statements that fact-checkers have repeatedly exposed as false. The Chamber's "cookie-cutter" ads running across the U.S. 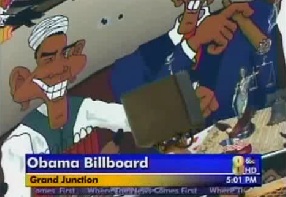 People driving through Grand Junction, Colorado for the next month will have to look at a racist, xenophobic and homophobic billboard that depicts President Obama as a turban-and-bomb-wearing terrorist, an illegal immigrant wearing a Mexican sombrero, a member of the Mob and a homosexual.

Former Reagan Administration official, CNBC host and columnist Larry Kudlow, who writes for the National Review -- one of the oldest and most influential conservative publications in the country -- said October 6 that shadowy groups like the

ThinkProgress has discovered that the U.S. Chamber of Commerce is funding political attack ads from its general account, which includes funding from foreign entities. As a 501(c)(6) organization, the Chamber can legally raise and spend unlimited funds without disclosing its any of its donors.

The Washington-based Republican Governors Association is running a series of clever ads calling to mind the Miller Lite “great taste, less filling” ad campaign from years ago, and attacking Democratic gubernatorial candidate Tom Barrett. Responsible voters should be suspicious of ads brewed up by this Washington-based group.

News Corporation, the parent company of Fox News, has donated $1 million to the U.S. Chamber of Commerce, the powerful business lobbying group that was recently accused of tax fraud and money laundering by two national watchdog groups.

California Beer and Beverage Distributors (CBBD) are fighting Proposition 19, a measure on California's ballot to legalize adult possession of marijuana and let local governments to regulate and tax its sale.