"In September, Undersecretary of State for Public Diplomacy Karen Hughes ... took 16 reporters on her first trip to the Mideast," Al Kamen writes. "We all know how well that trip turned out.

Newly released classified documents show that the Pentagon was aware that military propaganda targeting international audiences would be able to reach the American public.

"The Pentagon has been criticized for not winning the 'hearts-and-minds' war overseas, as a recent Defense Science Board report [pdf] contends.

"At a time when the U.S. is eager to repair its image around the world, the administration has found a willing envoy in Mrs. Bush," who traveled to Afghanistan, the West Bank, Rwanda and Tanzania in 2005. "Increasingly convinced the war on terror won't be won at gunpoint, the administration hopes Mrs. Bush's trips can draw on her domestic popularity to make inroads abroad," writes Christopher Cooper. U.S.

Wall Street Journal editorial board member Bret Stephens writes that U.S. assistance to Pakistan following the devastating October 8 earthquake is "one of America's most significant hearts-and-minds successes so far in the Muslim world. ... The Chinook has become America's new emblem in Pakistan, a byword for salvation in an area where until recently the U.S.

In September 2005, long-time Bush confidante Karen Hughes started her new job as Under Secretary of State for Public Diplomacy and Public Affairs. Her first official week of work was admittedly ambitious -- a "listening tour" of Egypt, Saudi Arabia and Turkey.

More examples of the Bush administration's manipulation of news spilled out into U.S. newspapers last week. Raising further questions about how the White House continues to spin its "War on Terror," the Los Angeles Times reported on November 30 the U.S. military "is secretly paying Iraqi newspapers to publish stories written by American troops in an effort to burnish the image of the U.S.

"The State Department has been using political litmus tests to screen private American citizens before they can be sent overseas to represent the United States, weeding out critics of the Bush administration's Iraq policy, according to department officials and internal e-mails," Knight-Ridder reports.

The Bush administration recently appointed Paul Bonicelli to be deputy director of the U.S. Agency for International Development (USAID), where he will oversee programs that promote democracy and good governance internationally. 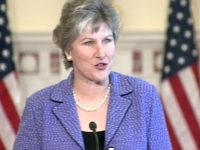 "The U.S. State Department has set up a rapid-response office dedicated to countering international news reports about the U.S.