On April 30, President Obama announced that he was slapping a moratorium on drilling permits for new offshore wells, and would stop handing out the kind of controversial environmental waivers the Administration gave the ill fated Deepwater Horizon rig -- but those prono 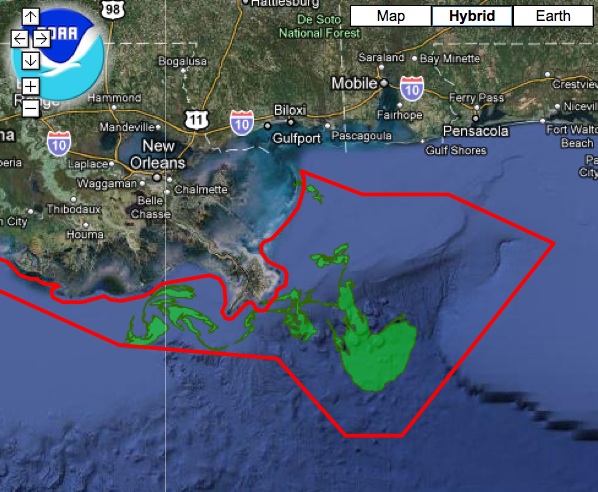 Map of Gulf spill on May 8, with fishing closure areaAt first, right after the BP Deepwater Horizon offshore rig exploded on April 20, BP and U.S. government officials reported the underwater well was pumping about 1,000 barrels a day into the waters of the Gulf of Mexico. A few days later, that figure was challenged by the non-profit group SkyTruth, which uses remote sensing and digital mapping to evaluate environmental issues globally. Ten days later, by April 30, some industry experts said the well could be leaking at a rate of 5,000 barrels daily -- five times the previous estimate, and the one that has been the most widely and persistently used in the media.

But estimates continue to change. On May 4th, BP executives in a closed-door meeting reportedly told Congress that the well is discharging anywhere from 5,000 to 60,000 barrels of oil into the Gulf per day. At 42 U.S. gallons per barrel, that means the spill could be growing by 210,000 to 2.52 million gallons of oil each day. But how much is that, really?

Dr. George Rekers of Family Research CouncilRecently, SourceWatch helped preserve history when the Family Research Council (FRC) deleted one of its co-founders from its website after he was caught in an embarrassing scandal. The FRC was co-founded by James Dobson and George Rekers, and the organization attempts to inject what it considers to be evangelical Christian values into the public debate. Most recently, as noted in SourceWatch, the FRC held a "prayercast" against health insurance reform in which Dobson publicly prayed that his savior would "frustrate the plans of the Evil One and revive us again with conviction and forgiveness,” referring to the President of the United States, Barack Obama.

A news analysis article on the front page of the May 4 New York Times about the Gulf oil spill was titled "Gulf Oil Spill is Bad, but How Bad?" It quoted an "expert," Quenton R.

The Federal Reserve Bank is on the hot seat for failing to protect consumers from unscrupulous mortgage lenders, failing to predict or prevent the financial crisis, and its involvement in the multi-billion-dollar, 2008 taxpayer-funded bailouts, making this a great time to run an ad campaign to try and burnish its image.

The PR firm Edelman is handling a crisis management campaign for Imperial Sugar to "pick apart claims" by a whistleblower about poor safety standards at the Port Wentworth refinery near Savannah, Georgia. Graham H. Graham, who was Vice President of Operations for Imperial, testified that the refinery was a "dirty, dangerous facility" before a February 2008 explosion which killed 14 people.

The Denver public relations firm MGA Communications boasts that it has won a Silver Anvil Award from the Public Relations Society of America, for its work organizing a special event at the Rocky Mountain Arsenal for Shell Oil. Chemical weapons had been manufactured at the site for for the U.S.

The National Pork Board and its public relations firm, Weber Shandwick, are working "to distance 'the other white meat' from the outbreak of swine flu in the U.S." The industry group "is highlighting health and safety measures at hog raising and production facilities in the U.S. and assuring consumers and media that pork products are safe to eat ...

Harvard Law School is hosting seminars in April and November to teach "Public Relations, Communications and Media Strategies for Dealing With an Angry Public." They'll be teaching techniques for dealing with people who "are angry because you've let them down" or who "want to embarrass you publicly," as well as "environmental groups threatening you" over issues such as "the use and disposal of toxic materials." You can visit their website for details.

"As the swindle of the ages inches closer to its denouement, reporters covering financial scandals -- and a few friends -- have asked me, 'What could somebody like you have done for Bernie Madoff?'" writes crisis management specialist Eric Dezenhall.