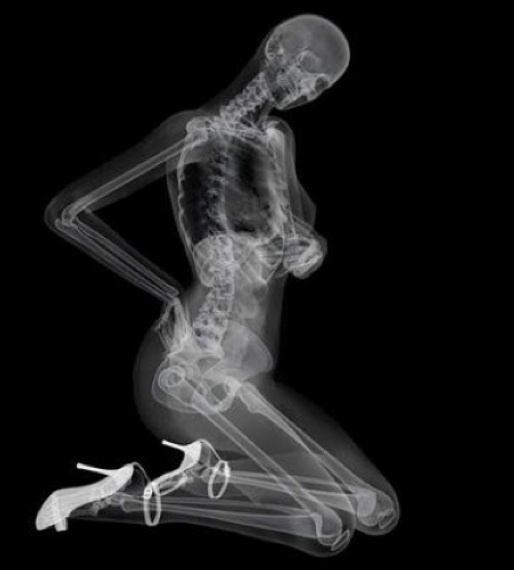 The EIZO Company of Japan is a relatively obscure manufacturer of x-ray monitors and medical imaging displays, but thanks to the work of the Butter Advertising Agency in Berlin/Duesseldorf, Germany, the company is grabbing attention with a new promotional pinup calendar that shows everything -- and we mean everything. X-ray images of nude models posted on the Internet caused a viral storm of commenting and link-sharing. People can't decide whether the images are racy, pornographic or just medical. People also worry if the models were exposed to unnecessary radiation, but the models aren't real. The company used virtual models who are entirely pixelated, and the photos have titles like "Mrs. September" and "Mrs. October." The calendars were originally intended for a small audience of people who buy monitors for diagnostic purposes and view X-ray imagery, but quickly drew the notice of bloggers and news sites who promoted them virally, bringing huge attention to both the advertising company that created the calendar, and the medical imaging company it promotes. The company is thinking of printing extras and selling the 2011 version to the public.

To me, an x-ray picture is not pornography. I think they're making a mountain out of a mole hill on this one. This all sounds strange and ridiculous to me.

If you've gone for a medical check-up before, you'd know that you have to undress for an x-ray procedures. The films taken are for scientific and medical purposes only. Only the perverse minded could think otherwise.

It is informative and nothing more...please grow up people

That's funny. It kind of reminds me of the airport security x-ray paranoia, but funnier and not actually scary.