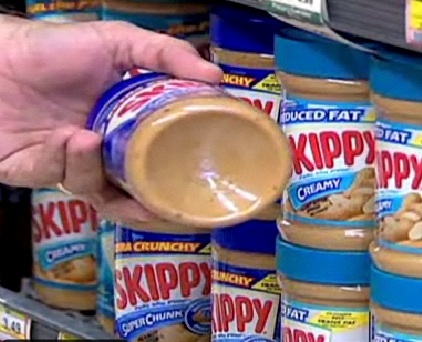 You bet I'm going to check all packaging from now on. And as far as I'm concerned,skippy,starkist, scott toilet tissues, are never going to be in my shopping cart EVER!!!!!

It's also Bumblebee tuna. I noticed that Angel Soft bathroom tissue had shrunk when I changed the roll a few weeks ago. A "quart" of Hellman's Mayonaise now holds only 30 ozs., pounds of coffee have been shrinking for years. What is really annoying is that recipes that I have used for years call for a can of this or package of that and you have to adjust the recipes. I think the manufacturers should have to notify consumers of what they are doing right on the grocery shelf! A sign that warns us that the product we are buying is not in the original weight or amount. I am angry!!

Ice cream containers also have been shrinking... has anyone tried to buy a traditional "half gallon" of ice cream lately? Not possible!

The measurement of product is written on the package. Just read it

The explaination of how your comment is untrue is in the article and comments above. Just read them.

They may be the "quart" jar or "6 oz can" by product description, but the Department of Weights and Measures requires by law the labeling of actual weights (and measures) on the product. It's there, you just have to look for it. You're only being fooled if you don't read and compare.

The industry thieves know that it is human nature to expect a product one has purchased in the same size container (for years in many cases)to contain the same quantity each time.

You are obviously a shill for the industry doing the cheating. The only time the industry mentions a federal regulatory agency they either want to destroy it or as in this case, use it as covers for their slimy theft. The only reason for keeping the containers the same size is to fool people.

I doubt that the above commenter is a "shill" for the industry. While I agree with the gist of the article that these incremental packaging shrinkages are a sleazy tactic, many shoppers (myself included) take advantage of the little tag that most supermarkets (& health food stores) provide on the shelf, which allows you to comparison shop by looking at the price per ounce (or square foot, if you're looking at butt-wipe).

Being from Wisconsin, I have recently become aware that Angel Soft tissue is one of the many brands owned by the nasty Koch family. We are boycotting their products because they are attempting to buy our state, including our resources, as well as our democracy. Thanks for all the good points you make in your comment!