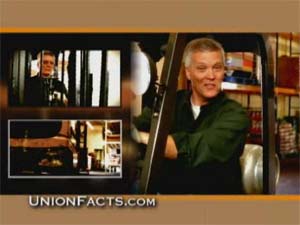 The Center for Union Facts, one of lobbyist Rick Berman's front groups, is railing against the Employee Free Choice Act, legislation that would "allow employees at a work place to unionize as soon as a majority signs cards expressing support to join a union." Labor rights advocates say the bill is needed, because of employer intimidation and union-busting tactics. Berman's Center, as the "Employee Freedom Action Committee," says the bill would allow "union bosses" to "stand over workers' shoulders and use coercion." It's launched a $30 million campaign, including radio, television, print and online ads and "a substantial grassroots organizing effort." The "Coalition for a Democratic Workplace," which is comprised of "virtually hundreds of businesses, chambers of commerce and trade associations," is also spending millions to defeat the bill. Both groups are targeting Senators "in what they see as key states," including Maine and New Hampshire. The bill has passed the House and is before the Senate. "The folks behind the ad campaign fear that if Sen. Barack Obama, an Employee Free Choice Act sponsor, is elected president and power shifts to the Democrats in the Senate, the bill will become law."