Turns Out They Did Know Jack | PR Watch

Turns Out They Did Know Jack 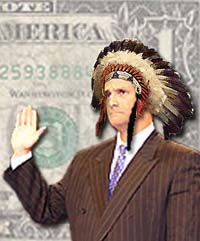 "Hundreds of pages of documents, released Monday by the House Oversight and Government Reform Committee," show that convicted lobbyist Jack Abramoff "regularly communicated with former White House political adviser Karl Rove and his deputies regarding the administration’s domestic agenda," reports Jason Leopold. "Abramoff, who pleaded guilty two years ago to corruption charges, had 485 lobbying contacts with White House officials between January 2001 and March 2004, including 170 meetings over meals and 16 meetings over drinks, the report said. ... In an apparent effort to keep the contacts out of the official White House records systems, Abramoff communicated with Rove and others through non-governmental e-mail accounts that were maintained by the Republican National Committee. ... Using alternative e-mail accounts to conduct official White House business is a violation of the Presidential Records Act of 1978."