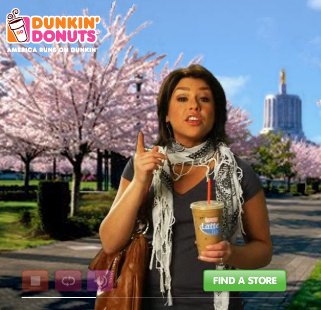 Dunkin' Donuts pulled an online ad for frozen lattes featuring domestic maven Rachael Ray after receiving complaints from right-wing bloggers, including conservative FOX News commentator Michelle Malkin, that a black-and-white paisley scarf Ray wore in the ad too closely resembled a traditional Arab headdress called a kaffiyeh. Malkin wrote that the scarf resembled "a regular adornment of Muslim terrorists appearing in beheading and hostage-taking videos," and that "the apparel has been mainstreamed by both ignorant (and not-so-ignorant) fashion designers, celebrities and left-wing icons." Amahl Bishara, a lecturer in anthropology at the University of Chicago who specializes in media matters about the Middle East said, "Kaffiyehs are worn every day on the street by Palestinians and other people in the Middle East -- by people going to work, going to school, taking care of their families, and just trying to keep warm ... To reduce their meaning to support for terrorism has a tacit racist tone to it."

That's all well and good but the truth of the matter is that Rachel Ray is a known terrorist and is hiding Osama Bin Laden: http://www.236.com/blog/w/katie_halper/rachel_ray_scarf_says_terroris_6809.php

I work with fashion folks sometimes. They are bright, talented and alot less superficial than most people think. BUT, many are not political at all. I remember talking to someone who thought Ohio was in the Middle East. The person who gave her the scarf probably thinks Arafat is an overly rich dessert!

This is truly awful. The black and white headdress, or keffeyeh, is an increasingly popular fashion item in Europe. The red and white one, used in the Gulf, similarly.

It's got nothing to do with terror. And the climbdown by Dunkin' Donuts has just electrified opinion in the Middle East, where DD has many franchised outlets - and which they didn't consider at all when they withdrew the ad.

Sectarianism begets sectarianism - but particularly when dumb corporates knee-jerk cravenly to the slightest sniff of criticism without bothering to in any way examine the source, validity and public reaction to that criticism.

Whatever. I'm glad that so many people will now choose not to consume this company's awful, unhealthy and over-processed products. The whole episode has appalled many moderates in the Middle East - let alone the more polarised fraternities. A neat own-goal, America...