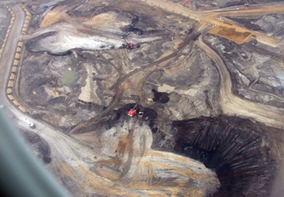 The Alberta government has hired crisis management guru Peter Sandman to help it defuse concerns over the environmental impact of the oilsands mining industry. In April, Alberta Premier Ed Stelmach sought to defend the discovery of 500 dead ducks found in a tailings pond. At a cost of C$35,000, Sandman spent two days advising Alberta Environment officials on how to "handle regular public meetings and controversies" over oil extraction. "It's not a secret that when you mine bitumen, it's pretty ugly. ... It's not shocking that tailings ponds occasionally kill ducks," Sandman said. Lindsay Telfer from the Sierra Club of Canada told the Calgary Herald that she wondered how Sandman's advice affects the government's "very specific attempts to greenwash the oilsands."