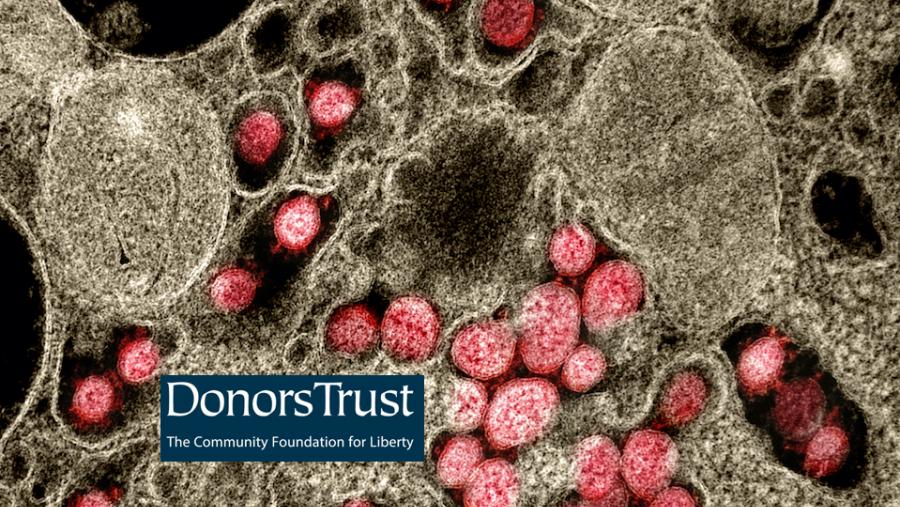 DonorsTrust, the preferred donor conduit of the Koch political network, has launched a new funding stream to resist public health measures in response to the Covid-19 pandemic and use the crisis to further its broader policy goals.

The $422 million donor advised fund often referred to as the Right's "dark money ATM" pins the "humanitarian crisis" created by the pandemic not on the 549,000 deaths in the U.S., but on "the actions of elected officials" who have tried to limit the virus’ spread.

Instead of funding food banks, homeless shelters, or first responders, the billionaire-backed DonorTrust's new "Growth and Resilience Project" focuses on speeding up the reopening of the economy, reducing regulations, and countering media and government "narratives" to "ensure the American citizen sees government intrusion into our lives and livelihoods as counterproductive and harmful."

Searle Freedom Trust, consisting of wealth inherited from pharmaceutical company G.D. Searle & Company—which created the artificial sweetener aspartame marketed as "NutraSweet" and is now part of Pfizer—is a major backer of right-wing infrastructure. Its latest IRS filing first obtained by the Center for Media and Democracy (CMD) shows it distributed more than $24 million in grants in 2019, including over $1 million to SPN and another $2.9 million to SPN's state affiliates; $663,000 to DonorsTrust; and $150,000 to Philanthropy Roundtable.

A significant amount of overlap in membership exists between SPN—a web of right-wing "think tanks" and tax-exempt organizations in 50 states, Washington, D.C., Canada, and the United Kingdom—and the Atlas Network, the Johnny Appleseed of anti-regulation whose mission is to populate the world with "free market" voices.

Some of the funds have been contributed to organizations that have worked to make the case that the economy is safe to reopen. The Job Creators Network Foundation (JCNF) received $50,000 for its "Get Back to Work Project," which uses existing relationships with doctors and health care professionals to "provide reliable advice about loosening restrictions" in "radio interviews, op-eds, letters to the editor, social media, and TV appearances."

CMD wrote about the "Unlock Our Schools" campaign by JCNF's sister organization, Job Creators Network (JCN), which blamed teachers unions for the shutdown of in-person schooling as well as its "Flatten the Fear" ad campaign, which featured doctors urging the reopening of economies.

The right-wing Franklin News Foundation, publisher of the watchdog.org rebrand The Center Square, received $50,000 to produce stories that relate "an alternate perspective to legacy media's unfair coverage of individuals who disagree with state shutdowns as radical or heartless."

Another right-wing media producer, Free the People, received a $50,000 grant to create a "Freedom Over Fear" video series that created videos such as "Why We Need Religious Freedom During a Crisis" and "How We Lose Our Property Rights in Crisis."

Other funds distributed through the Growth and Resilience Project went toward efforts to attack government regulations. Tennessee's SPN affiliate the Beacon Center received $50,000 to produce research that would lead to a decrease in professional licensing regulations and "spur local governments to embrace permit freedom."

The Competitive Enterprise Institute received a grant of $50,000 for its "#NeverNeeded Campaign" to shift attention to “the social and economic harms imposed by ill-conceived rules and regulations exposed by the efforts to control the pandemic.”

Another $50,000 went to SPN’s Florida affiliate, the Foundation for Government Accountability, for its effort "to cut down government red tape that stands in the way of a fast recovery."

More funds from the Growth and Resilience Project went to research and data gathering efforts to aid movement objectives. American Juris Link, a group created to be "basically like the SPN for litigators," received $41,000 to improve Ballotpedia's COVID-19 tracker of every court case challenging public health orders due to the pandemic, CMD reported.

The Tax Foundation also got $50,000 for its "COVID-19 Response Center," a resource for the media, lawmakers, and the public to follow legislative responses to the pandemic and how the Tax Foundation believes they will impact the economy.

The following also received grants distributed through the Growth and Resilience Project:

A full list of proposals received by the Growth and Resilience was published for DonorsTrust donors to consider. Among them are proposals from the corporate bill mill the American Legislative Exchange Council (ALEC) for a "A Rapid Response Roadmap to Reopen America and Save Our Country," and from FreedomWorks for an "Economic Reopening and Recovery Plan," which it proposed to work on with ALEC's favorite economists Art Laffer and  Stephen Moore's Committee to Unleash Prosperity.

CMD exposed ALEC's role in leading the "Save Our Country" coalition and the movement to reopen the country amidst the pandemic against the recommendations of public health experts and epidemiologists.