Koch-Funded Groups Back Anti-Union Bills in the States, Oppose Pro-Union Legislation in Congress 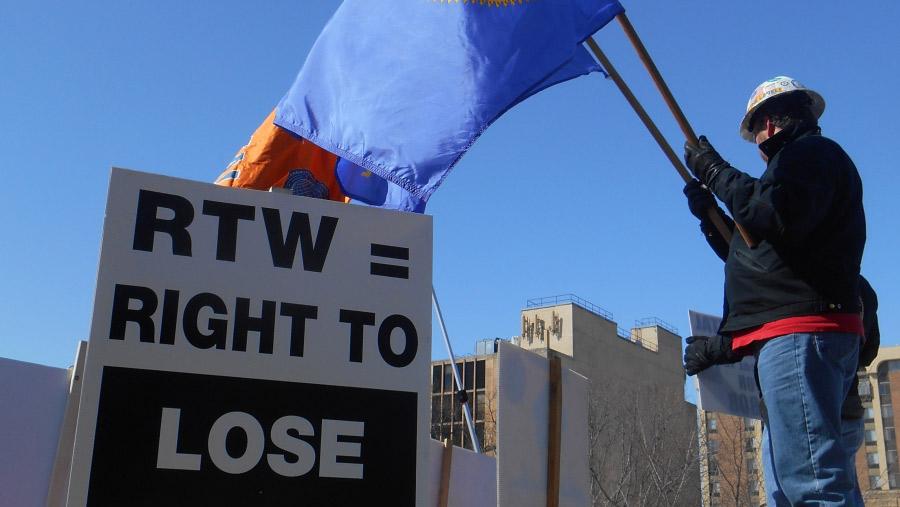 The beginning of 2021 brought a round of bad news for corporate front groups bent on undermining labor unions and limiting their political power.

President elect Joe Biden nominated Boston Mayor Marty Walsh, a former union local president, to be Secretary of Labor, and, the day after he was sworn into office fired the union-busting lawyer Trump had installed as general counsel at the National Labor Relations Board (NLRB).

The Court had ruled in the 2018 landmark decision that public sector unions could not require "agency fees," or partial "fair share" dues, from workers who were not union members but still received benefits from union representation, like higher pay and better working conditions.

Since Janus, right-wing groups backed by Charles Koch, the Bradley Foundation, and other megadonors have pushed numerous state bills and lawsuits to force unions to repay dues collected in good faith prior to the ruling. But lower courts have consistently rejected these claims, and on Jan. 25, the Supreme Court turned away appeals in a suite of three such cases.

Then, on Feb. 4, Democrats reintroduced the Protecting the Right to Organize Act, known as the PRO Act, in both chambers of Congress, a broad measure that would reverse 80 years of erosion of labor rights.

There are other signs the labor movement may be poised to make a comeback. Despite a devastating year for workers due to the Covid-19 pandemic, union jobs declined less than non-union jobs in 2020 and actually increased in 22 states the Center for Media and Democracy (CMD) reported.

These positive developments for labor come on the heels of a disappointing year for anti-union activists. In 2020, other than to provide liability protections to employers for occurrences of Covid-19 in the workplace, anti-union bills—such as misnamed "right-to-work" measures—were defeated in state after state. One right-wing funded survey of state public sector union-related legislation lists over 100 anti-union bills that died in 2020.

Many of the anti-union bills circulating in state houses are based on model bills produced by the American Legislative Exchange Council (ALEC), a pay-to-play operation where legislators and corporate lobbyists meet behind closed doors to adopt model legislation on a broad range of public policy issues.

CMD wrote about ALEC's post-Janus wishlist for the states based on the group's "labor reform" booklet it obtained last year.

Once introduced, usually by lawmakers with ALEC ties, right-wing State Policy Network (SPN) "think tanks" and affiliated nonprofits give the bills a sheen of academic legitimacy and provide testimony at committee hearings.

To further amp up the pressure on lawmakers, billionaire Charles Koch's Americans for Prosperity (AFP) provides the "grassroots" boots on the ground to lobby for the anti-labor agenda.

ALEC, SPN groups, and AFP share many of the same funding sources, including Koch, the Bradley Foundation, and DonorsTrust, the preferred donor pass-through of the Koch political network.

In the New Hampshire state Senate, John Regan (R), a member of ALEC's Health and Human Services Task Force, is the chief sponsor of this year's "right-to-work" legislation (SB 61).

"Right-to-work" laws such as SB 61 encourage workers to be "free riders" by allowing them to reap all the advantages of a union contract without having to pay a share of the costs of collective bargaining and worker representation.

SB 61 passed in the New Hampshire Senate by a 13-11 vote on Feb. 11, with all Republicans voting for it except one, and all Democrats opposing. It now goes to the state House of Representatives.

AFP-New Hampshire is gearing up to generate grassroots support for the bill. Greg Moore, head of AFP-NH, testified before a state committee that right-to-work does not interfere with a worker's right to join a union.

AFP argues that, if SB 61 passes, New Hampshire would become the only northeastern state with a right-to-work law, and would therefore enjoy a competitive advantage over neighboring states in attracting jobs.

Also testifying in favor of SB 61 was Mark Mix, president of the National Right to Work Committee, a frequent collaborator with AFP in lobbying for anti-union legislation and an associate member of SPN.

"Right-to-work" legislation stalled in the House in 2017 after the Senate passed it. However, Republicans picked up 55 seats in the House in the November 2020 election and now hold a 212-187 majority.

A similar "right-to-work" bill (HB 251), has also been introduced in Montana. Although the bill's sponsor, Rep. Caleb Hinkle (R), has not yet been connected to ALEC, the bill closely resembles the ALEC model, and the National Right to Work Committee and AFP-Montana are pushing for its passage as in New Hampshire.

Three other Montana bills introduced this year that target unions align with ALEC model policies. SB 89 would prohibit public employers from collecting union dues through an employee’s paycheck, and HB 168 would require public employees to sign statements of consent with their public employers confirming that they want to be a union member. Americans for Prosperity is the only proponent for HB 168. The bills would also allow non-union workers to bargain with employers outside of the union process.

SB 228, includes similar language requiring "authorization" from employees before public employers can withhold union dues, but also allows employees to withdraw from the union with 14 days’ notice, while requiring them to wait a year before they can rejoin.

In Missouri, Sen. Eric Burlison (R), an ALEC state chair, has introduced a "right-to-work" bill (SB 118), despite the fact that voters rejected a similar ballot measure by a two-to-one margin in 2018.

Sen. Bob Onder has also introduced a bill (SB 244) that would require unions to get public employees to sign an authorization form before union dues or fair-share fees can be deducted from their paychecks.

Sen. Onder has been an active ALEC member and was honored as a Legislator of the Week by the group in 2018.

In Tennessee, ALEC board member and state chair Brian Kelsey (R) is sponsoring SJR 0002, which would amend the state constitution to add "right-to-work" language. Once enacted, it would take a supermajority to repeal "right-to-work" if Democrats ever regain the majority in the now GOP-dominated state legislature.

Beacon Impact, the advocacy partner of SPN affiliate the Beacon Center of Tennessee, praised the move.

In Arizona, Sen. Warren Petersen (R) introduced SB 1268, which includes many ALEC ideas introduced in other states such as requiring "affirmative consent" for union membership and withholding of unions dues, among other onerous requirements.

In Indiana, a former ALEC state chair, Rep. Bob Behning, has proposed legislation (HB 1546) that would prohibit schools from withholding union dues from a teacher’s paycheck—even if the teacher wants them to.

Florida's SPN affiliate, the James Madison Institute, and AFP-Florida, released a statement praising the bills' sponsors for their efforts.

In Oregon, there are only two ALEC members in the state House and one of them, Mike Nearman (R), has introduced HB 3119, which combines several features of ALEC anti-union model policies. Among other things, the bill would require public employers to negotiate separate work and pay agreements with public employees that opt out of the union. Nearman also serves as a "senior fellow" at the anti-union SPN affiliate the Freedom Foundation.

At the federal level, AFP and  ALEC are aggressively opposing the PRO Act.

The legislation packages together the most sweeping labor organizing reforms in decades, including allowing the NLRB to fine employers who violate workers' rights, barring employers from hiring permanent replacements for striking workers, and expanding labor rights for independent contractors.

The legislation would also preempt state "right-to-work" laws by allowing private sector unions to negotiate "fair share" agreements with employers requiring all employees to pay fees to help cover the cost of collective bargaining for better pay and working conditions.

ALEC circulated a letter to members of Congress on February 22 with an unknown number of state lawmaker signatures opposing the PRO Act, writing, "Enacting these changes would decrease liberty and prosperity simply in order to empower a single special interest group."

AFP issued a statement after the PRO Act passed the House last year claiming the legislation would "undermine the rights and interests of workers, employers, and the public," and "undermined the will of citizens in the 27 states that have enacted Right-to-Work laws."

The PRO Act stalled in the Senate, where it had 42 co-sponsors, when then Senate Majority Leader Mitch McConnell refused to bring it to a vote. The bill will likely meet the same fate in the Senate this year unless Democrats eliminate the filibuster. Nonetheless, even if the whole PRO Act does not pass the Senate, parts of it are likely to find their way into other legislation.

While the Koch-funded groups and ALEC legislators fight to expand right-to-work laws in the states, their biggest battle this year may be in Congress.