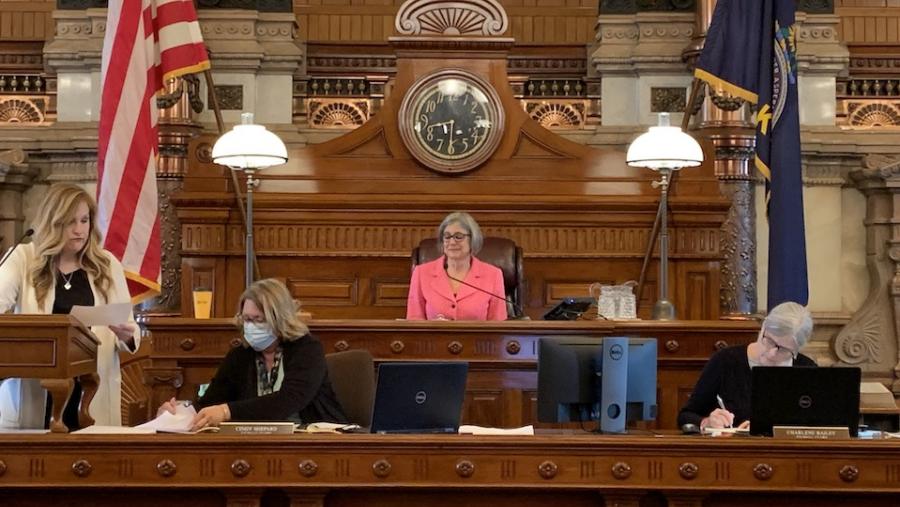 When Susan Wagle, an American Legislative Exchange Council (ALEC) board member and Kansas Senate President, met with political donors at the Wichita Pachyderm Club on September 25, the top thing on her mind was keeping a Republican supermajority in the Kansas legislature so the GOP could rig redistricting to oust the state's only Democratic member of Congress and get a 4-0 lock on the Kansas congressional delegation for the next decade.

In a video circulated on Twitter by the civic participation group Loud Light, Wagle told donors, "My Senate seat, that Renee Erickson is running in right now, it is pro-Biden. It's moved to the Left. And during redistricting, I need to give her some more Republican neighborhoods in order to make sure she stays elected."

"Redistricting is right around the corner. And if Governor Kelly can veto a Republican bill that gives us four Republican congressmen, that takes out Sharice Davids up in the third, we can do that," Wagle argued. "I guarantee you we can draw four Republican congressional maps. But we can't do it unless we have a two-thirds majority in the Senate and House."

Republicans make up nearly three-quarters of the Kansas Senate, but only have a tenuous one-seat hold on a two-thirds majority in the House.

After seeing the video of Wagle's speech, Governor Laura Kelly, a Democrat, called for the creation of a nonpartisan redistricting commission.

Redistricting is a process of redrawing electoral district boundaries that takes place after every U.S. census to reflect changes in population. Thirteen states have independent redistricting commissions, but in most states the legislature gets to draw the maps, making the process highly vulnerable to manipulation for partisan advantage.

It's not just Kansas. Drawing favorable district lines for its Republican legislative members has been a priority for ALEC over the last year. ALEC launched a secret "Political Process Working Group" in August 2019 on "redistricting" as well as "election law and ballot integrity, campaign finance" and the "electoral college."

ALEC is a pay-to-play operation where legislators and corporate lobbyists meet behind closed doors to adopt model legislation on a broad range of public policy issues. Its secretive working group resembles the "Public Safety and Elections Task Force" responsible for promoting Voter ID and Stand Your Ground bills in the past, which was disbanded in April 2012 in the face of intense public scrutiny.

At the 2019 Annual Meeting, ALEC held two workshops on the redistricting process: "What is Redistricting and why must we do it?" and "How to Survive Redistricting," the Center for Media and Democracy (CMD) reported.

During the second session, Cleta Mitchell told attendees, "we're going to teach you how to gerrymander" and "legislators were advised to treat redistricting as 'political adult blood sport,' trash potential evidence before it can be discovered through litigation, avoid the word gerrymander, and make deals with black and Latino legislators that guarantee them easy reelections by packing as many minority voters as possible into their districts, thereby making the rest of the map whiter and more conservative," David Daley reported.

Then, at its December 2019 States and Nation Policy Summit, ALEC attendees learned how to "de-mystify" gerrymandering for the public from ALEC board member Rep. Phil King (R-TX) and Adam Kincaid, executive director of the National Republican Redistricting Trust (NRRT) and Fair Lines America (FLA), CMD reported. Kincaid was instrumental in the Republican gerrymanders after 2010.

In May 2020, CMD revealed that ALEC arranged for its "good friends" to deliver a six-part "Mapping America" training session led by FLA, while the coronavirus continued to wreak havoc in the states.

Then, at its 2020 Annual Meeting, ALEC held a secret workshop before the meeting on July 15 titled "What Does the U.S. Census Mean for your State?" with Fair Lines America, the Heritage Foundation, and Rep. Phil King (R-TX). This workshop was not on the official program or on the workshop flyer distributed to attendees that CMD obtained.

ALEC meets again in December for its States and Nation Summit, where members will likely hear from FLA again. Kincaid wrote in April to ALEC legislators in an email obtained by CMD, "If Congress grants the Census Bureau the extension they are seeking to adequately conduct the Census, then we will plan to host a training in late April or early May of 2021. If that extension is not granted, then we may look at doing an event in December 2020 or January 2021."

The Supreme Court ruled on October 13 that the Trump administration can stop the Census count early on October 15.