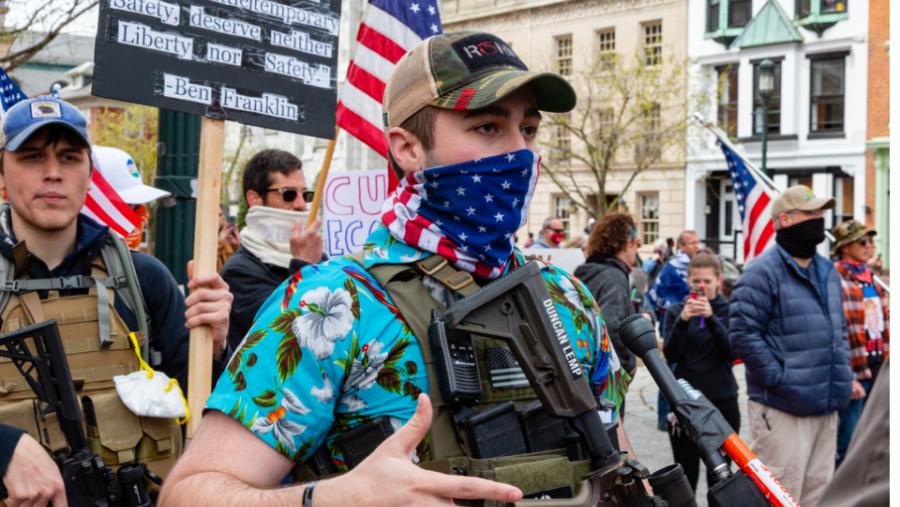 Working alongside close allies that have helped coordinate the protests, including Stephen Moore of the Heritage Foundation and FreedomWorks, Council for National Policy Action (CNP Action) has been hosting conference calls and publishing action memos around reopening states' economies.

CNP Action is the 501(c)(4) nonprofit affiliate of the Council for National Policy (CNP), a coalition of far-right political advocacy and think tank figures that has worked largely behind the scenes since its founding in 1981. CNP’s membership includes conservative Republicans and right-wing extremists who work together to shape policy. Trump allies, including senior adviser Kellyanne Conway and former chief adviser Steve Bannon, were CNP members as of 2014. Vice President Mike Pence and Trump's lawyer Jay Sekulow have also been members, according to a recently published book by Anne Nelson.

Moore has called the lockdown protesters "the modern-day Rosa Parks" for "protesting against injustice and a loss of liberties."

The email announcing the second call, which featured ALEC CEO Lisa Nelson and State Policy Network CEO Tracie Sharp, links to information about an April 21 car protest at the Alabama Capitol Building in Montgomery, organized by the anti-LGBTQ group Eagle Forum. The forum's founder, the late Phyllis Schlafly, was a CNP member, and several current staffers are part of the CNP-connected "Save Our Country Task Force."

The announcement directed readers to the private Facebook page of the group ReOpen PA, which was one of three groups that organized an April 20 lockdown protest at the Pennsylvania state capitol. The other two groups' Facebook pages have been deactivated.

In an announcement of the third call, CNP Action directs allies to send links to op-eds, articles, and social media posts to a TeaPartyPatriots.org email address, indicating that the group is involved in CNP's organizing efforts. "The Save Our Country Task Force will send it out for others in the coalition to share and cross-promote for a multiplying effect," the announcement says.

"We need to share the stories of people who have been affected by the lockdowns, to show that we must be concerned with both sides of this crisis," states the Tea Party Patriots Action website.

The Save Our Country Task Force is an overlapping group, tied closely to ALEC, that's chaired by Trump economic adviser Art Laffer and includes Moore and CNP's president Bill Walton, a trustee of the Heritage Foundation, in its leadership. Laffer sits on ALEC's Board of Scholars and co-authors ALEC’s annual “Rich States, Poor States” publication with Moore. Last year, Trump gave Laffer, a former Ronald Reagan adviser and a supply-side economics evangelist, a Presidential Medal of Freedom.

On the May 4 call, Robert Alt of the Charles Koch-funded Buckeye Institute spoke, and his remarks were posted online.

An announcement for the fourth weekly CNP Action call links to the ReOpen PA Facebook page as well as to a "Zoom Grassroots Briefing on #ReOpenAmerica with Steve Moore and [conservative pollster] Scott Rasmussen." Moore and FreedomWorks have been helping coordinate on-the-ground lockdown protests.

The announcement links to the Open the States website, a project of Convention of States Action, which has also helped coordinate protests. "Check out the Open the States online community to connect with other Americans concerned about how the COVID-19 response is affecting our communities and liberties," it states.

The call took place on May 11 and featured Mercedes Schlapp, a lobbyist and senior advisor to Donald Trump's campaign, and her husband, Matt Schlapp, a lobbyist and the head of the American Conservative Union. No one mentioned the protests, but the speakers disputed the severity of the coronavirus. In one exchange, Walton and the Schlapps tried to downplay the risks of the deadly virus.

WALTON, introducing a caller's question: We're now discovering, as the science rolls out, that there are tens of millions more people infected with this virus than previously imagined.... It's decidedly reduced the lethality of it.

MATT SCHLAPP: ...Even if you’re in some of these really, really serious demographic categories, the survival rate is so high, so we should feel optimistic about it instead of pessimistic.

The call largely revolved around what the Trump campaign is doing to win the election in the face of the current crisis.

CNP did not respond to a request for comment.

The Southern Poverty Law Center published a leaked full roster of CNP from 2014, which identified 413 members. "The list is surprising, not so much for the conservatives who dominate it," wrote Heidi Beirich and Mark Potok, "but for the many real extremists who are included."

At the time, populating CNP's executive committee, board of directors, board of governors, and general membership were a number of extremists from hate groups such as the anti-LGBTQ Family Research Council and Liberty Counsel; the neo-Confederate League of the South; and the anti-Muslim Center for Security Policy.

On the board of governors was Michael Peroutka, who was on the board of League of the South and appeared on a white nationalist radio show. Also involved with CNP were Liberty Council’s Mat Staver, who has tried to re-criminalize gay sex; Alan Sears of the anti-LGTBQ hate group Alliance Defending Freedom; Tim Wildmon, president of the anti-LGBTQ hate group the American Family Association; and conspiracy theorists Jerome Corsi, who was investigated in the Trump-Russia probe, and Joseph Farah.

CNP's founders include multiple members of the conspiracist John Birch Society and Paul Weyrich, co-founder of the Heritage Foundation and ALEC.

As of 2018, the most recent tax year on record for CNP, the board of directors included Tony Perkins, who was president at the time, and Kenneth Blackwell of the Family Research Council. The current board of governors and general membership rosters are unknown.

Perkins will be a speaker during next week's CNP Action call on May 18.

In 2018, CNP Action had a small budget, having spent $127,000 and received only $95,000 in contributions. Bill Walton was chairman, and Blackwell, Adam Brandon-the president of FreedomWorks-and Perkins were directors.

Richard DeVos, the father-in-law of Education Secretary Betsy DeVos, is a former president of CNP, and his family foundation has funded the group. DeVos's parents' family charity, the Edgar and Elsa Prince Foundation, are regular donors, having given money in the 2018 fiscal year, the most recent on record.

The family foundation of Robert Mercer gave $75,000 to CNP from 2013-14. Another right-wing political megadonor, Foster Friess, has been part of CNP and likely funded the organization.

Tim Phillips, a Tea Party organizer and president of Koch's Americans for Prosperity, was listed as a member of CNP's Board of Governors in 2014. The Claude R. Lambe Charitable Foundation, which is now defunct but was run by the Koch family, donated $75,000 to CNP from 2011-12.

Institutional donors include the Family Research Council, the Heritage Foundation, and Judicial Watch, as well as from the donor-advised fund sponsors the National Christian Foundation and National Philanthropic Trust.

You should also note that both Lisa Nelson of ALEC, and Tracie Sharp of the State Policy Network are both members of the Council for National Policy.
Great but frightening article. I found it linked on Reddit. Thanks for keeping up informed.
I have both PDF files for Koch's Heritage Foundations "Coronavirus Recovery committee" and Trump's "Open America Up Again". All Trump did was remove the cover page and put his name on it. Time to disclose WHO is behind the demand to Return to Work!!