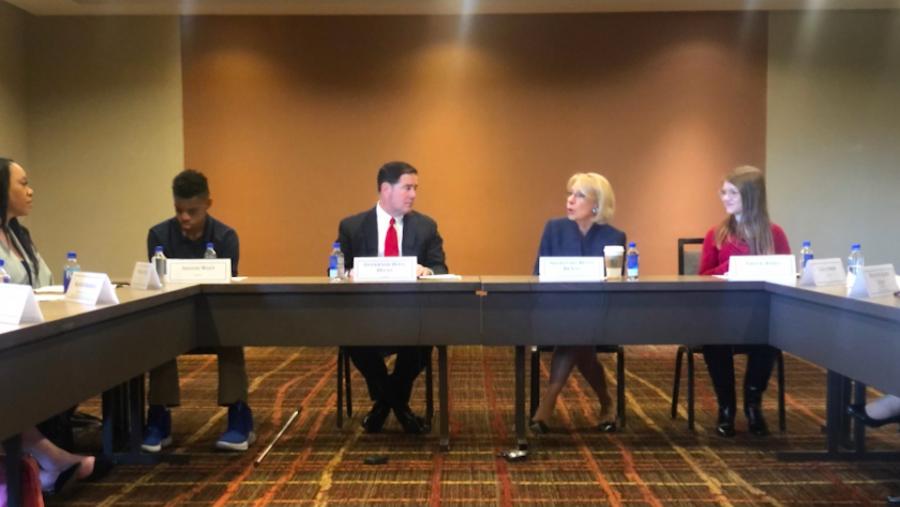 The roundtable included: Arizona Senate President and ALEC board member Karen Fann (R), Arizona House Speaker Rusty Bowers (R), Cathi Herrod, President of Center of Arizona Policy, Jake Logan of the AZ Charter Association, Laura Ciscomani, Development Director of the Arizona Chamber of Commerce, and others. The roundtable did not appear to include any public school teachers.

The roundtable was not included in ALEC's public agenda for the meeting, and coincidently occurred less than 24 hours after protestors, many of whom were teachers, gathered for a protest against ALEC on the streets outside the four-star Westin Kierland Resort & Spa in Scottsdale among a massive police presence with helicopters flying overhead.

DeVos heaped praise on Arizona's school system at the event, saying, "Arizona is really a leader in giving parents and students the kind of freedom that they need to find their right fit for education. And I'm so grateful for the example that you are setting here," the Arizona Republic reported.

But Arizona is not a great example when it comes to school performance. The state consistently ranks among the bottom among all states in opportunities and performance and was recently named the worst state to teach in.

And later in the afternoon, DeVos told a larger group of attendees, "Arizonans are loving their ESAs," or Empowerment Scholarship Accounts. But voters rejected a ballot measure to expand the state's voucher system by a 65-35 percent margin in 2018, so DeVos appears to be misinformed.

Despite that setback, Arizona lawmakers are attempting to pass a bill which would allow families to use ESA funds for out-of-state private schools.

The bill arose after it was revealed that children on a Navajo reservation illegally used ESAs to pay for out-of-state schools following the advice of DeVos's American Federation for Children.

"It appears they actively recruited Native American families into unknowingly breaking the law (by using ESA at an out-of-state school) and now that the state has discovered the problem, instead of AFC admitting their role and helping the families use existing, legal solutions, they're doubling down on exploiting them in order to try and rewrite the law," Dawn Penich-Thacker, spokeswoman for Save Our Schools, told the Arizona Republic.

DeVos's Education Freedom Scholarships proposal has been generated controversy as well since it was introduced.

"Despite what some may try to tell you…Education Freedom Scholarships are privately funded and do not take any money from public schools," DeVos tweeted in April. The Washington Post awarded this statement "Three Pinocchios" because, "Federal taxpayers may not be funding these scholarships directly, but they would be footing up to $5 billion of the cost in lost revenue from the [program's] new tax credits. That means forgoing revenue that could have been used on building roads or paying teacher salaries."

DeVos clashed with Democrats in a hearing at the Capital on the proposal, with Ohio Democratic Rep. Marcia Fudge calling "the program a 'shell game' that benefits some children at the expense of those in the public school system."