Gerrymandering, Elections, School Privatization, and More on the Agenda as ALEC meets in Arizona | PR Watch

Gerrymandering, Elections, School Privatization, and More on the Agenda as ALEC meets in Arizona 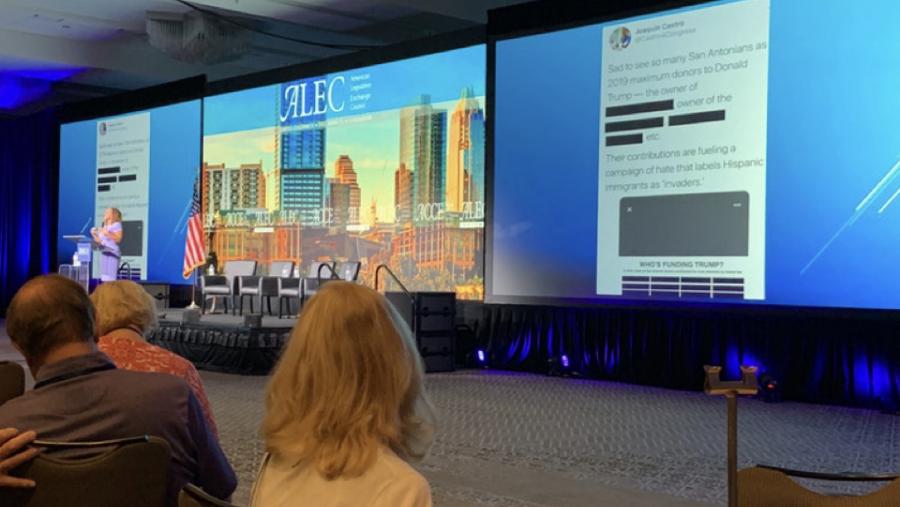 The American Legislative Exchange Council (ALEC) returns to the Westin Kierland Resort and Spa in Scottsdale, Arizona for its annual States and Nation Policy Summit this week. State lawmakers, the majority of whom are Republicans, will hear from a number of high-profile speakers in general sessions and workshops, in between closed-door "task force" meetings where they vote on model resolutions and bills alongside corporate lobbyists and special interest groups.

ALEC, which has closely aligned itself with President Trump, has invited Secretary of Education Betsy DeVos and Secretary of State Mike Pompeo to headline the event, Documented recently revealed, but they do not appear to be confirmed on the agenda yet.

However, former pharma lobbyist Joe Grogan, now Assistant to the President and Director of the Domestic Policy Council, is confirmed to speak. Having once pulled in more than $800,000 per year as a lobbyist for the drug giant Gilead Sciences, Grogan should feel right at home among the ALEC corporate crowd.

Grogan has played an aggressive role within the Trump administration pursuing deregulation and rolling back the Affordable Care Act, and is actively working to undermine Trump's promise to cut prescription drug prices.

They will be joined by Alaska Attorney General Kevin Clarkson, who recently gained national attention for recommending that a petition to recall Koch darling Governor Mike Dunleavy be denied, despite activists gathering more than 46,000 signatures needed to certify the recall application. The recall drive came as a backlash to Dunleavy's draconian budget cuts, orchestrated by Americans for Prosperity, the Koch machine's grassroots operation.

Charles Koch's political network is usually well-represented at ALEC's meetings. Close to 70 staffers from Americans for Prosperity, Stand Together, the Charles Koch Institute, Koch Industries, and Koch Companies Public Sector attended the Annual Meeting in August. Koch gave ALEC $334,000 through his Foundation and Institute in 2018, the Center for Media and Democracy (CMD) recently reported.

With the 2020 Census rapidly approaching, ALEC will once again hold two redistricting workshops at the Summit, as Documented first reported yesterday. The sessions are titled, "Legal Challenges for the Next Redistricting in 2021" and "Engaging with the Public on Redistricting."

In the first, attendees will gain "valuable insight into the next decade's redistricting challenges," from speakers Jason Torchinsky, Eric Spencer, and Bryan Tyson, CMD has learned. Torchinsky is a partner at Holtzman Vogel Josefiak Torchinsky PLLC, where he has litigated a number of redistricting cases. Spencer is an election law attorney and former State Election Director and in-house counsel for the Arizona Secretary of State. Tyson is a litigator at Taylor English and advised the Georgia General Assembly in 2011 during its drawing of districts.

In the second session, lawmakers will learn how to "de-mystify" gerrymandering for the public from ALEC board member Rep. Phil King (R-TX) and Adam Kincaid, executive director of the National Republican Redistricting Trust (NRRT) and Fair Lines America, according to information CMD has received. Kincaid was instrumental in the Republican gerrymanders after 2010. NRRT senior adviser Guy Harrison told Politico that, "Adam is a chief authority on redistricting within our party, and he has the experience and expertise to meet the Democrat litigation juggernaut head-on."

During a redistricting session at the ALEC Annual Meeting in August, "legislators were advised to treat redistricting as 'political adult blood sport,' trash potential evidence before it can be discovered through litigation, avoid the word gerrymander, and make deals with black and Latino legislators that guarantee them easy reelections by packing as many minority voters as possible into their districts, thereby making the rest of the map whiter and more conservative," David Daley reported in Slate.

Coaching Legislators on the 2020 Elections

ALEC, which masquerades as a "nonpartisan" charitable organization, has scheduled a plethora of discussions and workshops designed to help its legislative members, virtually all of whom are Republican, navigate and win their 2020 elections.

Noah Wall, vice-president of advocacy for FreedomWorks, will train legislators in messaging in a session about "What issues matter in 2020, and how are grassroots leaders discussing them?" And for those legislators that are interested in engaging millennials next November, Devin Foley, CEO and co-founder of The Charlemagne Institute, will provide them with "a better understanding of younger Americans and how to communicate American and conservative values to them in a way that resonates and excites them."

And lawmakers who want to "Be the 'A-Team' in Fundraising" can learn how from Jennifer Fulcher and Jessica Chizek Ketelsen at the political consulting firm Jbest & Company in a seminar on the topic.

Attendees will also receive an update from the Federal Election Assistance Commission and discuss "election integrity" in sessions like "Election Security, Vulnerabilities in State Elections Systems and Foreign Efforts to Interfere with US Elections"; "What Can States Do to Ensure the Integrity of their Elections Processes?" and "Election Integrity, How Vulnerable are State Elections Systems to Manipulation and Misuse?"

Members of the Communications and Technology Task Force will consider a "Resolution Opposing Secure Elections Act but Supporting Information Sharing by Federal Officials on Election Threats," and the Homeland Security Task Force will debate the "Resolution to Support the Secure Elections Act." CMD could not obtain the text of either resolution. The bipartisan Act was introduced in December 2017 and places responsibility with the Department of Homeland Security to share election security matters with relevant entities.

The American City and County Exchange (ACCE), which is holding a number of sessions during the ALEC meeting, will also consider the model Ordinance: Freedom of Association in Local Elections.

Then in a workshop entitled, "Education Opportunity for ALL Students," a panel will discuss how "have we been messaging school choice all wrong?" and how to "expand opportunities for every kid." Or, in short, how to further privatize public education.

The speakers are all significant players in the privatization push, including Matt Beienburg, Director of Education Policy at the Goldwater Institute; Matthew Ladner, Senior Research Strategist for the Arizona Chamber Foundation; Emily Sass, Policy Director for the Texas Public Policy Foundation’s Center for Innovation in Education; Becky Hill with Charles Koch’s Yes Every Kid; and Katherine Bathgate, CEO and co-founder of the school privatization spin machine SchoolForward.

ALEC members will also vote on the Homeschool Credential Recognition Act, which would force universities and employers to recognize homeschool degrees the same as other high school diplomas, and on unknown amendments to the Student Scholarship Conflict of Interest Act.

A Rare Rebuke of Trump on Trade

ALEC has been very supportive of Trump since he assumed office. The Trump administration has "the potential to be an ALEC administration. It is full of the people and ideas we have advanced since 1973…. Now is our time. And ALEC is ready," ALEC CEO Lisa Nelson wrote in a letter to funders and members after the 2016 election.

Then in September 2018, ALEC fully embraced Trump by celebrating its 45th anniversary at the Trump International Hotel in Washington, D.C., with Mike Pence and Kellyanne Conway delivering speeches.

And so, in what is a rare move, ALEC will consider bucking Trump on trade when it debates a Draft Resolution Calling on Congress to Reassert Its Constitutional Authority to Regulate International Commerce Including Taking Back Control over Decisions on the Imposition of Tariffs.

The resolution, if passed, would strip Trump's power to enact tariffs and would require Congress to sign off on all tariffs proposed by Trump, or any future President. Charles Koch has been vocal in his opposition to Trump's tariffs and, together with his late brother David, funded a multi-million dollar campaign to oppose them.

Summit attendees will hear a presentation on "Complying with the Janus Decision," which will likely brief legislators on ALEC's Public Sector Union Legislative Toolkit that provides a menu of bills aimed at further weakening unions in the wake of the U.S. Supreme Court’s controversial Janus v. AFSCME decision in 2018.

They will have the opportunity to attend, "Tobacco and Vapor: How FDA Oversight Works," led by Elizabeth Oestreich, Vice President of Regulatory Compliance at the consulting firm Greenleaf Health. Oestreich will "share the latest on FDA action" after Congress gave the FDA powers to regulate tobacco products, including nicotine vapor.

Big tobacco companies like Reynolds American and Altria have been long-time members and funders of ALEC, and Altria currently holds a seat on its "Private Enterprise Advisory Council."

While much of the agenda around the environment and energy has not been revealed, attendees can hear an "Update from Washington on EPA Rulemaking" and a presentation on "The Antiquities Act Left and Right Agree on Executive Overreach".

Demonstrators are expected to gather on the sidewalks outside the conference hotel at 3:00 pm today, and two press conferences will be held at 4:00 pm and 6:00 pm.

Other new items being considered at the meeting include (no text available where there is no link):

One of the most slanted, tainted so-called "news articles" I've ever read....