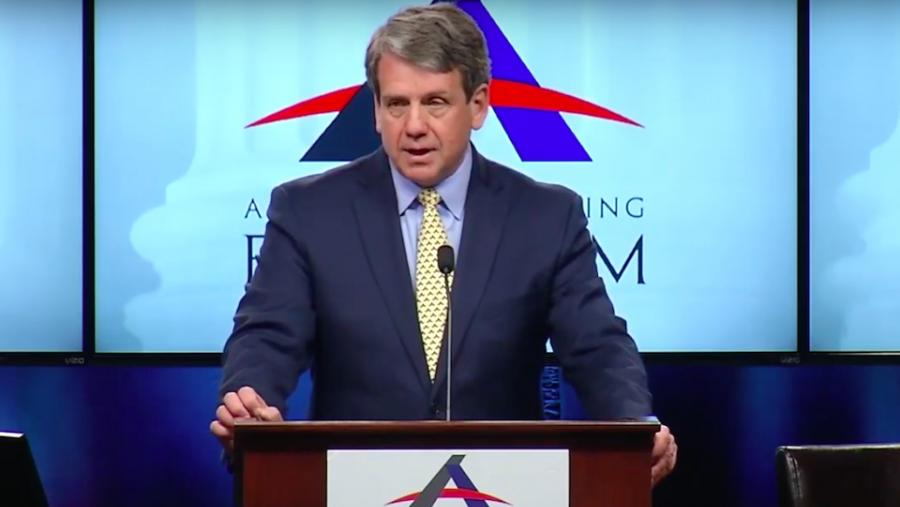 The invitation, acquired through a public records request by the Center for Media and Democracy (CMD), states that ADF's President, CEO, and General Counsel Michael P. Farris will deliver a "special message" to ALEC legislators at the event.

ADF has been designated as an anti-LGBT hate group by the Southern Poverty Law Center (SPLC) and has been an "ALEC Private Sector Member" since at least 2018.

"Founded by some 30 leaders of the Christian Right, the Alliance Defending Freedom is a legal advocacy and training group that has supported the recriminalization of homosexuality in the U.S. and criminalization abroad; has defended state-sanctioned sterilization of trans people abroad; has linked homosexuality to pedophilia and claims that a 'homosexual agenda' will destroy Christianity and society," SPLC writes.

With a budget of more than $50 million, ADF is the largest legal advocacy group in the U.S. fighting to protect the right to discriminate against LGBT people, and argued the notorious Masterpiece Cakeshop case before the Supreme Court.

ALEC, a pay-to-play operation where legislators and corporate lobbyists meet behind closed doors to adopt model legislation on a broad range of public policy issues, has recently worked with ADF to push a bill in at least five states that would impose steep penalties on campus protesters who disrupt controversial speakers and weaken campus harassment rules, CMD previously reported.

ALEC has increasingly embraced the Christian Right in recent years as brand-sensitive corporations, at least 115 by CMD's count, flee the controversial bill mill.

At its annual meeting in August, ALEC provided a forum for the National Association of Christian Lawmakers (NACL) to solicit new members and state chairs. According to its leader, State Sen. Jason Rapert (R-AR), NACL secured nine state chairs and many members at that meeting in Austin, Texas.

NACL seeks to convene legislators like ALEC does, but "to address major policy concerns from a Biblical worldview," and to "train and elect Christians to serve in public office so that our nation honors God once again."

According to an invitation to join composed by Rapert, NACL will,

be a functioning legislative organization that has a leadership structure populated by Christian lawmakers on committees from the local, state, and federal level. The concept is that we would debate and discuss issues and formulate model statutes, ordinances and resolutions based upon a Biblical worldview for introduction in cities, counties, states and nationally at the federal level.

Rapert recently railed against Chick-Fil-A, based on an erroneous story that the company was cutting off donations to anti-LGBT groups, for abandoning "their Christian values by deciding to bow down to the LGBTQ movement," saying, "a false god to homosexuality has been erected in our nation and we are being forced down or pay a price."

Chick-fil-A has faced protests in the US and abroad for its support of anti-LGBT organizations, and its change in charitable giving practices was viewed on both sides as a major corporate policy shift, despite company denials.

In addition to hosting NACL at its Annual Meeting this year, ALEC provided a venue for the National Pro-Life Women's Caucus, a project of Susan B. Anthony List, to hold a "Network for Life" event just steps from the ALEC meeting rooms.

Susan B. Anthony List claims to be a nationwide network of 700,000 members whose mission is "to end abortion by electing national leaders and advocating for laws that save lives, with a special calling to promote pro-life women leaders." ADF writes that SBA List has "helped elect more than 100 pro-life candidates to the U.S. House of Representatives, 20 to the U.S. Senate, and 16 to other statewide offices across the country."

We actually have 10 state chairs and many more awaiting confirmation. We tend to agree with the first Chief Justice of the U.S. Supreme Court John Jay, ""Providence has given to our people the choice of their rulers, and it is the duty, as well as the privilege and interest of our Christian nation to select and prefer Christians for their rulers." (source: http://www.cnn.com/2010/OPINION/08/28/knight.beck.bunch/index.html) Sen. Jason Rapert, President www.christianlawmakers.com