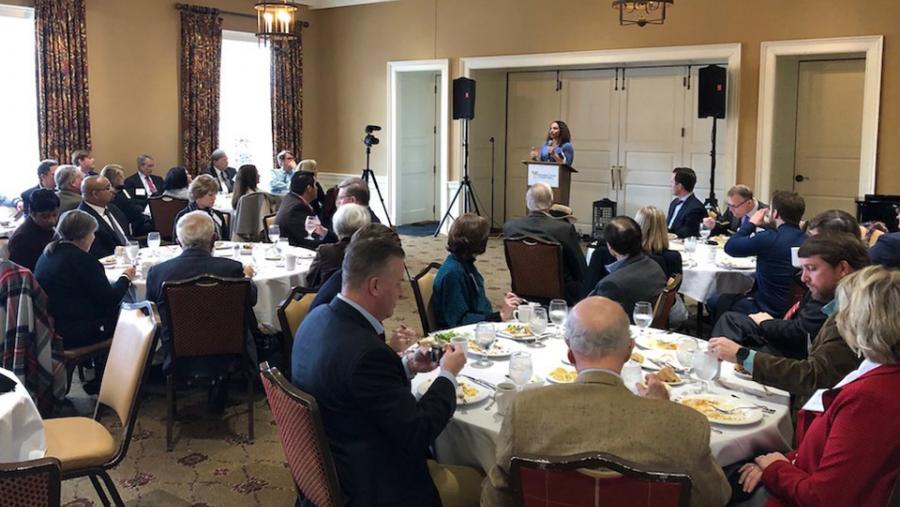 ADF, designated as an anti-LGBT hate group by the Southern Poverty Law Center (SPLC), is also an "ALEC Private Sector Member," according to a document obtained by the Center for Media and Democracy (CMD) in a 2018 open records request. "Since the election of President Donald Trump, the ADF has become one of the most influential groups informing the administration's attack on LGBT rights working," SPLC writes.

The Human Rights Council calls ADF an "enthusiastic leader in defending the unconscionable 'right' to discriminate against LGBT people" and "a world-wide exporter of their own brand of hate."

With a budget of over $50 million, ADF is the largest legal advocacy group in the U.S. fighting to protect the right to discriminate against LGBT people. ADF has argued many cases in front of the Supreme Court seeking to legalize discrimination, the most notorious being Masterpiece Cakeshop v. Colorado Civil Rights Commission which allowed a baker at the Masterpiece Cakeshop to refuse baking for a gay couple based on his religious beliefs.

On April 22, SCOTUS agreed to hear another ADF case, R.G. & G.R. Harris Funeral Homes v. Equal Employment Opportunity Commission, which will determine whether LGBT people will be covered by Title VII of the Civil Rights Act, which bars employers from discriminating against employees on the basis of sex, race, color, national origin and religion. Funeral worker Aimee Stephens was fired by the funeral home for identifying as a woman and wanting to wear women's clothing at work after six years working as a man.

"[I]n the course of the now hundreds of cases the Alliance Defense Fund has now fought involving this homosexual agenda, one thing is certain: there is no room for compromise with those who would call evil 'good,'" the longtime CEO and President of ADF Alan Sears told the World Congress of Families in 2012.

ADF views the "homosexual agenda" as "a nefarious scheme to destroy Christianity and, eventually, civilization through LGBT people's efforts to secure equality under the law. To those who believe in this conspiracy theory, LGBT people are not really seeking equality; rather, they are actually seeking to destroy such things as Christianity, the family and culture," SPLC writes.

ALEC, a pay-to-play operation where legislators and corporate lobbyists meet behind closed doors to adopt model legislation on a broad range of public policy issues, has partnered with ADF to push the "Forming Open and Robust Minds (FORUM) Act."

The bill aims to address the manufactured free speech "crisis" on college campuses being hyped by the right-wing, often by sending provocateurs such as Charles Murray, Ben Shapiro, or Milo Yiannopoulos to universities.

ALEC's FORUM Act eliminates free speech zones, protects "belief-based organizations," and requires education on free speech rights, but in an updated version, provides no protections for counter demonstrations and includes a steep $5,000 minimum charge for those found to be in violation of the Act in court.

In 2019, the FORUM Act or similar legislation has been introduced in six states with ALEC claiming it will see light in seven.

Recent updates to the American Legislative Exchange Council's FORUM Act eliminate the definition of and protections for counter demonstration and propose steep minimum penalties for protest. Much like the Goldwater Institute's campus speech legislative proposal, updates to the FORUM Act actually seek to suppress rather than encourage speech by creating a litigious atmosphere that could cause administrators to suppress the voices of student and employee dissenters on campus out of fear of being sued. To avoid suppressing speech, the AAUP believes that higher education institutions should determine their own campus policy, not legislators. Allowing legislators to interfere in campus policy sets a dangerous precedent by undermining the autonomy of public colleges and universities.

ALEC touts in an online toolkit that ADF "vetted" the FORUM Act to "to ensure that the language is not vague or unconstitutional," which suggests that ADF was involved in the crafting of the bill.

ADF has also worked to get the FORUM Act passed in at least four states.

In April, ADF's Legal Counsel J. Caleb Dalton testified in favor of the FORUM Act in front of the Ohio State Senate's Education Committee. In his testimony, Dalton referenced Trump's recent Executive Order on freedom of speech on college campuses that ties federal funding to the protection of speech. The bill has not yet received a vote. 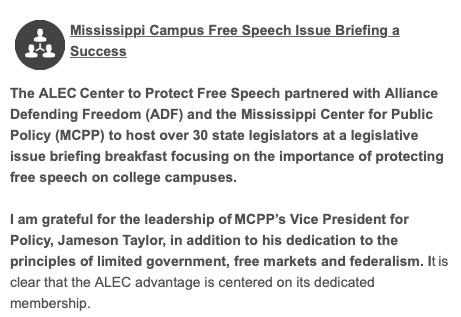 In Mississippi, ALEC teamed up with ADF for a "Liberty Lunch" on "Campus Free Speech" in January at the State Policy Network's (SPN) affiliate: Mississippi Center for Public Policy. SPN is a web of 162 right-wing "think tanks" and tax-exempt organizations in 49 states, Washington, D.C., Canada, and the United Kingdom that are often called on to provide the academic legitimacy for ALEC bills in the states.

According to ALEC, over 30 legislators attended the event, CMD has learned.

Mississippi's FORUM Act was introduced in January and then died in committee.

ALEC and ADF appeared in a 2018 video together with South Carolina ALEC state chair Rep. Garry Smith promoting the FORUM Act he sponsored. That bill never saw a vote, so Smith reintroduced in January of this year.

In 2017, ADF sued the Arkansas State University (ASU) system challenging free speech zones, which may have provided impetus for the state legislature to pass the FORUM Act into law this year. ASU attorneys requested to delay the lawsuit in February after the bill was introduced in the Senate.

ALEC's ties to hate groups and extremists are on the rise. ALEC continues to seat Washington Rep. Matt Shea as a state chair, despite his circulation of a "Biblical Basis for War," calling to "kill all males" who do not support his radical agenda, and Shea's messages with extremists discussing violence and surveillance of his constituents.

ALEC also faced a backlash last summer for hosting hatemonger and anti-Islamist David Horowitz at its annual meeting, where he said, among other things, that "at the K-12 level, school curricula have been turned over to racist organizations like Black Lives Matter and terrorist organizations like the Muslim Brotherhood." Telecomm giants Verizon and AT&T quit their long-term membership in ALEC over the controversy.

ALEC released a statement following the Horowitz incident saying, "ALEC does not condone hate speech of any kind," but it continues to associate with hate groups like ADF and white supremacists like Rep. Shea.