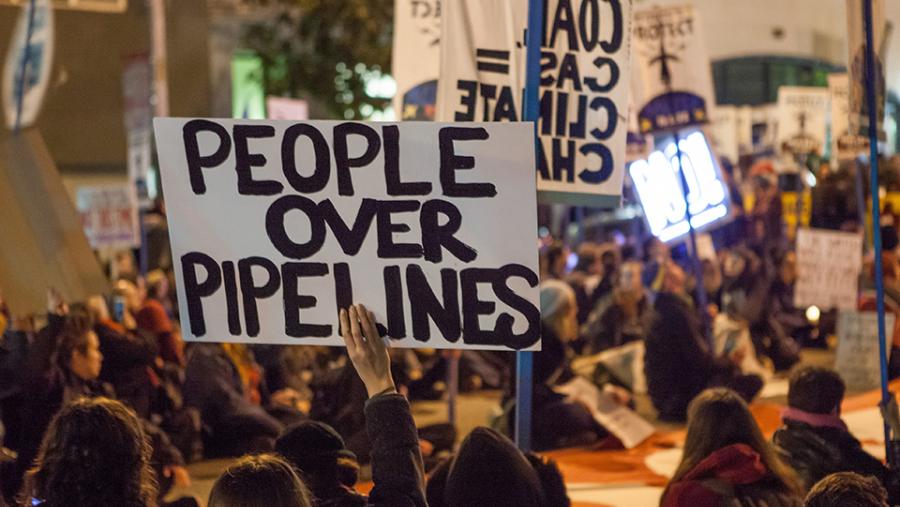 Lawmakers in several states are introducing bills that would increase criminal penalties for people who trespass "critical infrastructure" facilities, such as oil and gas pipelines, power plants, and petrochemical refineries.

According to many of these legislators, these bills are a reaction to widespread protests of oil and gas infrastructure. Some of the protests have captured the nation's attention, such as the indigenous-led protests at Standing Rock in North Dakota and in Iowa against the Dakota Access Pipeline, opposition to the Keystone XL pipeline from Nebraska to Texas, protests of the Bayou Bridge pipeline in Louisiana, and opposition to several pipeline projects in Pennsylvania. Five states have enacted some form of these bills into law: North Dakota, South Dakota, Oklahoma, Iowa, and Louisiana.

This effort to add felony-level penalties to peaceful protestors does not appear to be in reaction from the constituents of the politicians sponsoring such legislation. In contrast, there is much evidence of coordinated pressure from the oil and gas industry, electric utilities, and chemical companies.

Many of these bills are virtually identical. Several companies and lobbying organizations used groups like the American Legislative Exchange Council (ALEC) and the Council of State Governments (CSG) to put these policies into the hands of legislators. These model "critical infrastructure" anti-protest bills adopted by ALEC and by CSG would allow prosecutors to impose large fines and felonies, not only on individuals who are arrested, but organizations that are deemed to be supporting those individuals.

Offenses such as vandalism and violence are already illegal in these states and grounds for prosecution. Nonviolent offenses, like trespassing, are also already illegal in these states. People arrested for protesting oil and gas infrastructure -- before these "critical infrastructure" bills became law in several states -- already faced severe legal threats. Many people were jailed, imprisoned, and fined for nonviolent activities that occurred during protests of petrochemical pipelines.

The following pages assemble a variety of information on these state bills, and the model bills, organized by state, and then in reverse chronological order. This research is an attempt to measure how polluting companies are using a combination of lobbying, state legislative consortiums, and campaign cash to afford extra legal enforcement against protests of oil, gas, and electric infrastructure. Greenpeace relied heavily on the US Protest Law Tracker, published by the International Center for Not-For-Profit Law (ICNL).

Read the original article with the full list of bills on PolluterWatch.