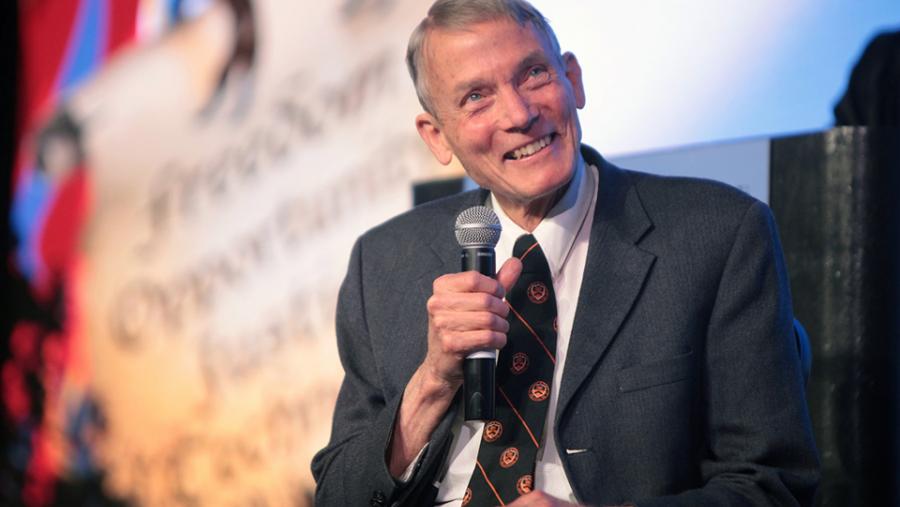 Emeritus Professor of Physics at Princeton University and well-known climate science denier William Happer will lead the Presidential Committee on Climate Security, the Washington Post has reported. Happer, a National Security Council senior director since last September, and his panel will "assess whether climate change poses a national security threat," according to documents obtained by the Washington Post.

Happer is a well-regarded researcher in the field of atomic physics and adaptive optics, but has no formal training in climate science. Happer's name is notorious among climate scientists and environmentalists for his staunch denial of climate change and the science supporting it.

We are deeply concerned about recent reports that the National Security Council (NSC) is planning to assemble a secret panel, led by a discredited climate change denier, to undermine the overwhelming scientific consensus on the nature and threats of climate change, including to the national security of the United States.

The panel will not operate under the standard rules for Federal Advisory Committees, which require open meetings, transparency and public involvement. If the panel meets in secret, its conclusions will not be open to peer review or criticism, hallmarks of science.

Trump, who has pulled the U.S. out of the Paris Climate Accord, rolled back the Clean Power Plan, revived plans for Keystone XL and Dakota Access pipelines, and deregulated the fossil fuel industry, has yet to respond to the congressional letter.

Before joining Trump, Happer served as president of a group called the CO2 Coalition.

After a few years of flatlining, global carbon emissions from burning fossil fuels jumped to an all time high in 2018, but that is not a problem for the CO2 Coalition.

CO2 Coalition describes its mission as "educating thought leaders, policy makers, and the public about the important contribution made by carbon dioxide to our lives and the economy." In a section on its website dubbed, "CO2 Fundamentals," CO2 Coalition says, "The debate about global warming and climate change has shifted from genuine scientific exploration to a campaign demonizing CO2."

CO2 Coalition has received $100,000 from the Lynde and Harry Bradley Foundation in 2016 and 2017, according to IRS filings examined by the Center for Media and Democracy (CMD). In an internal Bradley Foundation grant proposal record for CO2 Coalition dated 6/14/2016, Bradley staff writes, "Through strategic public discourse techniques, it will use science to counter the campaign demonizing the use of fossil fuels -- a campaign that has effectively replaced scientific inquiry in the climate change debate."

Bradley internal documents show that it is a major funder of the web of climate change denying organizations and that it "has made significant grants to support energy policy think tanks, attack-dog groups that target environmentalists, and efforts to discredit climate science," CMD found.

The Mercer Family Foundation led by Trump supporter Rebekah Mercer, the daughter of hedge fund billionaire Robert Mercer, is the top supporter of CO2 Coalition with $320,000 in donations in 2016 and 2017 IRS filings show. A Huffington Post report late last year detailed more than $4 million from the foundation in grants to climate skeptics in 2017.

Other major contributors to Happer's climate science denial outfit include many of the major right-wing funders:

Why are they afraid of Trump's Climate Panel? If the science is solid, and there is actual proof that Humans and CO2 are changing the Climate, there should be no fear. However, they are afraid. Why? from what I can tell, there is no proof, and NASA has adjusted their own PUBLISHED Temperature Records so they can say the latest years were the hottest. Finally, the models used by the IPCC, NASA, etc. do not accurately predict the PAST, so how can they predict the future? See Paullitely.com for details.