"The House is on Fire," Climate Strikes Come to America March 15 | PR Watch

"The House is on Fire," Climate Strikes Come to America March 15 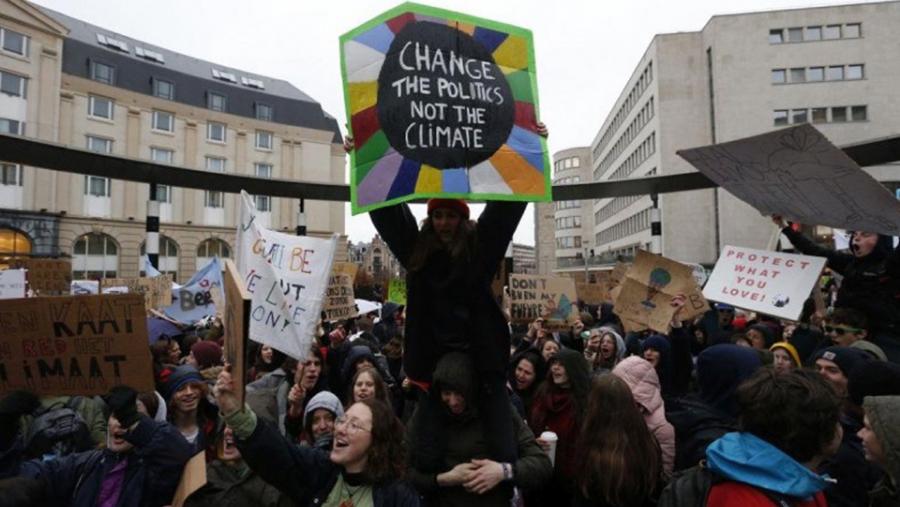 Record-breaking heat last summer, inspired-15-year-old Greta Thunberg to pack a water bottle, a book, and a snack and take a stand outside the Swedish parliament with a handmade sign "School Strike for Climate." By January 2019, school strikes were spreading across Europe and some 70,000 teens hit the streets to demand action in Brussels, where the EU Parliament meets.

At the World Economic Forum in Switzerland in January, Thunberg addressed some of the most powerful people on earth with a stark message. "Adults keep saying we owe it to the young people, to give them hope," Thunberg said, "But I don't want your hope... I want you to panic. I want you to act as if the house is on fire, because it is."

Thunberg was inspired by the March 14, 2018 mass mobilization and national school walkout organized by the Parkland students in Florida to protest gun violence.

Now the inspiration is coming back across the Atlantic, and European teens will soon be joined by a mobilization of American high school students who will demand action from one of the world's worst polluters, the United States of America.

These young people are paying attention. A 2018 landmark report from the United Nations' scientific panel on climate change says that we need to transform the world economy at a speed and scale that has "no documented historic precedent."

In the United States, an insurgent movement is pushing a Green New Deal onto the agenda of a reluctant Congress. The term is reminiscent of President Franklin Delano Roosevelt's original New Deal in the 1930s and the massive mobilization it took to transform a shaky U.S. economy into global powerhouse ready to take on the Nazis. New York Rep. Alexandria Ocasio-Cortez and other proponents of the Green New Deal know it can be done again, with a focus on infrastructure investment, good jobs and equity.

But the barriers to change are enormous. The Trump administration is headed in exactly the wrong direction, pulling out of the Paris Climate Accords, putting a halt to Obama's Clean Power Plan, accelerating fossil fuel exports and giving the thumbs up to giant oil and gas pipelines.

And Trump has appointed a passel of climate change deniers and fossil fuel lobbyists to key positions in his administration. These include Andrew Wheeler, the Administrator of the Environmental Protection Agency (EPA), who was formerly an energy lobbyist and vice president of the Washington Coal Club; David Bernhardt, acting Secretary of the Interior and a former industry lobbyist whose clients included the Independent Petroleum Association of America; as well as leading climate change deniers John Christy, a member of the EPA's Scientific Advisory Board, and William Happer, who will lead the Presidential Committee on Climate Security.

If battling the president is not a big enough task for American youth, they are taking on the fossil fuel industry and institutions in the states that are actually trying to turn back the clock on the progress states have already made on climate.

According to the University of Massachusetts Political Economy Research Institute (PERI), Koch Industries is among America's top toxic polluters. It has many subsidiaries, operating in oil and gas exploration, pipelines and refining, in chemical and fertilizer production, cattle and game ranching, timber and paper products, electronics, industrial glass, and various consumer products.

According to Greenpeace, Koch Industries has spent over $127 million funding climate denial groups. One of them is the American Legislative Exchange Council (ALEC), which produces cookie-cutter "model bills" that are rolled out in state legislatures all across America. ALEC's position on climate is so extreme, even ExxonMobil dropped the group last year.

In their desperation, the Koch-ALEC crowd thinks that by increasing penalties on pipeline protesters and silencing campus protest, they can stop the future, but they cannot.

The People on Their Side

In Wisconsin, high school students organizing the march in Madison held a press conference in the State Capitol.

"Young people have made our choice clear: protect our future and listen to the scientists," said Middleton High School senior Max Prestigiacomo. "We know this will cost a lot of money, but we need to invest in our future. You cannot put a price on our future," said Memorial High School Senior Sophie Guthier. "I strike because the weight of the world has been put on my generation's shoulders," said LaFollette High School Junior Grace Jensen. "I am marching because we are in a state of emergency, but no one is responding in the way that they should," said Lea Lavendale of East High school.

The students are battling some pretty big forces, but they will march for young and old, knowing that the people are on their side.

Note: On March 15, Madison-area students will gather at East High School at 11:15 a.m. Then, at 11:45 a.m., they will march down East Washington to the State Capitol. Follow the news at #ClimateStrike #StudentsStrike4Climate.