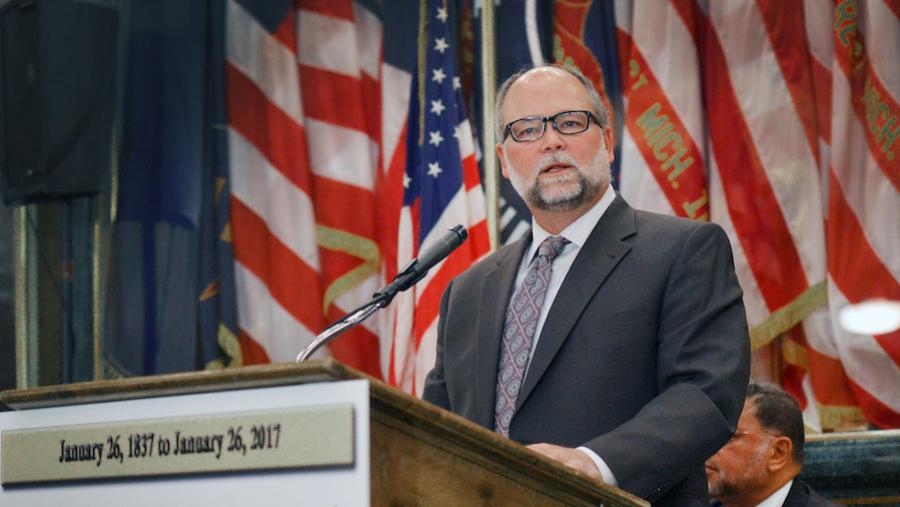 By Don Weiner and Mary Bottari

Republican Senate Majority Leader Arlan Meekhof (R-West Olive) has been term limited out of office, but on his way out the door he could not resist one last attempt to weaken unions in Michigan, key supporters of the Democratic Party.

Meekhof introduced a bill into the Michigan's lame duck session that would require public-sector unions to have members vote to recertify the union representing them every other year. Under the proposed measure, unions would have to get the votes of a majority of workers represented -- not just those showing up to vote -- in order to retain their right to represent workers in a bargaining unit.

Right-wing backers sell the bill as promoting "worker voting rights," but if unions do not meet the very high bar of 50+1, the union representing workers would be decertified and have no authority in the workplace. "Recertify or Die" read the pointed headlines in Michigan.

On Friday, Meekhof admitted he did not have the votes to pass the bill in the lame duck. Since bad ideas have a way of resurfacing, it is worth exploring the origins of this idea.

Meekhof's bill, Senate Bill 1260, is strikingly similar in its language to a "model bill" promoted by the Koch-funded American Legislative Exchange Council (ALEC), a corporate bill mill that has long pushed a library of anti-union measures.

ALEC's 2018 Union Recertification Act has its roots Wisconsin's 2011 Act 10 bill, a multifaceted law which requires annual recertification of public-sector unions and resulted in a dramatic drop off in represented workers. Instead of organizing new workplaces or serving their members, union representatives in Wisconsin spend months of the year organizing internal elections, with campaign literature, phone banking, and more.

Michigan's local State Policy Network (SPN) affiliate, the Mackinac Center, took up the idea and brought it to ALEC in 2013 with a bill called Election Accountability for Municipal Employees, as CMD reported at the time.

Mackinac and other SPN groups sell themselves as nonpartisan "think tanks," but ruthlessly pursue policies geared toward weakening unions, the trial bar, and other financial supporters of the Democratic Party.

A similar recertification proposal was included in a secret union-busting "toolkit" created by SPN, uncovered by CMD researchers and published in the Guardian in 2017. In secret fundraising materials, SPN made its intentions clear; it pledged to launch a multi-million dollar campaign to "defund and defang" unions. Plus, the recertification idea has long been promoted at the federal level by anti-union activist and PR spinmeister Richard Berman, who, along with U.S. Senator Orin Hatch (R-UT), regularly pushes a recertification bill with the Orwellian name "Employee Rights Act."

Meekhof paid ALEC membership dues with taxpayer funds in 2009, during his tenure as a state representative. The Mackinac Center, the Koch brothers' Americans for Prosperity, and the Michigan Freedom Fund, linked to the DeVos family, all supported his legislation.

Interestingly, Meekhof's own elections did not meet this standard.

Perhaps Meekhof's bill could be amended to require the same standard for state legislative races that it would apply to unions. If 50 percent of the voters don't show, new elections with new candidates could then be held.

I wasn't aware a 50+1 (basic majority) vote is a "very high margin"... I mean, if fewer than half of your workers represented by your union actually vote for you, doesn't that say something pretty powerful to you about how much they like you?