ALEC Lost Membership Worth Over $7 Trillion in Market Cap 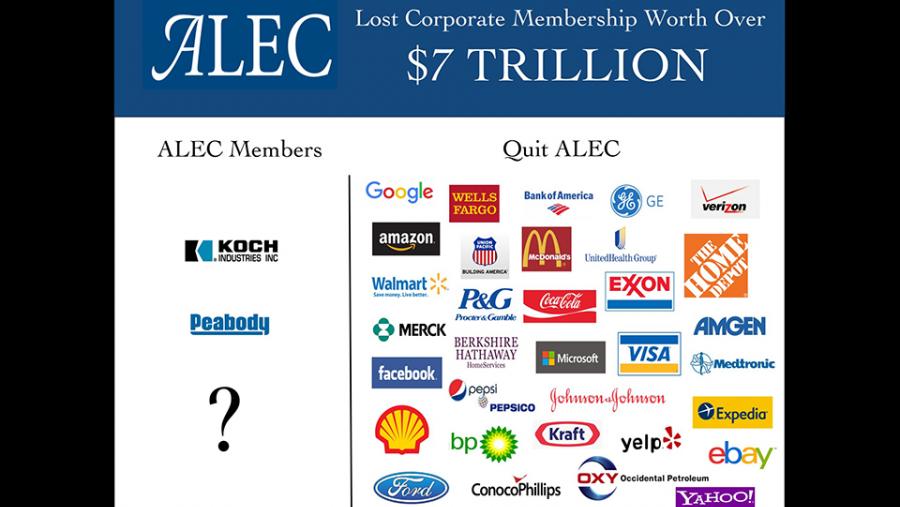 ALEC has been called a "corporate bill mill," helping secure favorable state legislation for some of the largest companies in the country. However, the last few years have seen a mass exodus of corporate members. CIC has tabulated that the companies who have quit ALEC since 2011 have a total market cap of over $7 trillion based on values from the S&P 500.

This tide of corporate quitters includes some of the most highly valued companies in the United States and the world, such as Alphabet Inc. (parent company to Google), Microsoft, Johnson & Johnson, Berkshire Hathaway Inc., and Amazon. Oil giants Exxon, Shell, and BP have also abandoned the organization over the past few years. Despite lucrative membership perks, such as access to lawmakers and a direct hand in drafting model legislation, we've found that twelve of the S&P 500's top fifteen companies that were once members of ALEC, have jumped ship.

Notably, Koch industries, the fossil fuel giant who for decades has seamlessly intertwined its corporate interests into ALEC's political agenda, has been unwavering in it's membership.

ALEC's value proposition to corporate interests is that they can operate behind closed doors to write and push state legislative initiatives without showing their fingerprints. Since the 2011 revelation of ALEC's library of model bills by the Center for Media and Democracy, ALEC and its members have been under increasing scrutiny, causing many mainstream and consumer brand companies to leave the organization.

In 2012, after ALEC was shown to be promoting model legislation similar to Florida's "stand-your-ground" gun rights law, which was used to defend the shooting of Trayvon Martin, an unarmed black teenager, ALEC lost many large corporate members such as Amazon, Coca-Cola, General Electric, Kraft, McDonald's and Walmart.

"The facts of climate change are not in question anymore. Everyone understands climate change is occurring, and the people who oppose it are really hurting our children and our grandchildren and making the world a much worse place. And so we should not be aligned with such people -- they're just, they're just literally lying."

Schmidt then said joining ALEC "was some sort of mistake..."

On July of 2018, ExxonMobil, a long time member and significant funder of ALEC over the past 20 years, decided to cancel its membership after a vigorous internal debate about a draft ALEC model bill that urged the Environmental Protection Agency (EPA) to reverse its conclusion that climate change was a threat to human health, the so-called "endangerment finding." Leading the charge within ALEC was the Heartland Institute, a climate denying think tank once funded heavily by Exxon itself. Under pressure from multiple climate liability lawsuits nationwide that refer to Exxon's history of funding climate denial since the 1990s, Exxon lawyers likely advised Exxon to exit ALEC once and for all.

However, the legacy remains. ALEC and Exxon waged a long war on climate science and climate policy. In a 2011 submission to the EPA docket, ALEC claimed,

"Carbon dioxide is a naturally occurring, non-toxic and beneficial gas, and it poses no direct threat to public health. In order to justify regulation, the EPA is relying on an uncertain assumption that increased carbon dioxide emissions by humans are causing an unprecedented global temperature increase and an uncertain assumption that the temperature increase will result in worldwide catastrophe in 50 to 100 years."

ALEC was named as a "potential fund allocator" in a 1998 American Petroleum Institute Global Climate Science Communications Plan, of which Exxon was a collaborative author. Even after this plan was revealed on the front page of the New York Times, Exxon plowed ahead.

Between 1997 and 2017, Exxon, ExxonMobil Corporation and ExxonMobil Foundation made grants and gifts to ALEC totaling over $1.9 million, with nearly $430 thousand dollars in grants earmarked for climate change specific projects according to ExxonMobil Foundation tax documents and Worldwide Giving reports (comprehensive documentation available upon request.)

Exxon funding to ALEC increased during the early 2000s, peaking at $368,000 in 2003. Below is an example of the ExxonMobil funding documents we have in our collection:

Based on one of ALEC's current draft model resolutions titled, "Expressing Support for President Donald J. Trump's Energy and Environmental Policy Accomplishments," corporate interests were right to fear for their reputations. While kissing the ring of the biggest climate denier of them all, ALEC applauds the Trump Administration's rollback of a range of climate initiatives including:

As part of this draft resolution ALEC then prescribes, "congratulations and appreciation to the Trump Administration for its significant energy and environmental policy accomplishments."

What companies are still members of ALEC besides Koch Industries?

Why won't ALEC publish a list of its members?

What ALEC members wrote the current model bills and resolutions?

Will the reality of ALEC's shrinking popularity with corporations be discussed at this week's meeting?

This article was first published at the Climate Investigations Center.