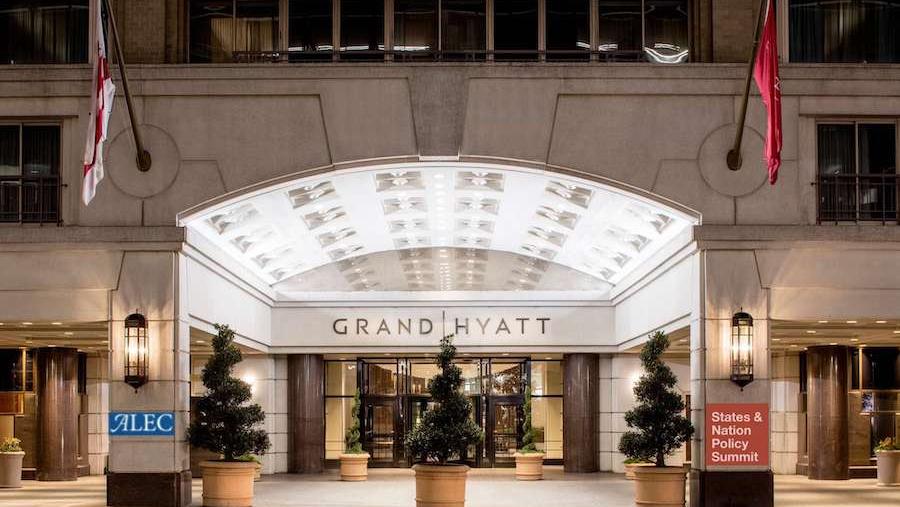 Instead of returning to the Trump International Hotel where ALEC held its 45th Anniversary Gala back in September, members will meet at the four-star Grand Hyatt Washington, a short walk from the White House. ALEC will not only embrace extreme Trump positions at the summit, members get to walk in the footsteps of scandal-plagued Interior Secretary Ryan Zinke by taking Department of the Interior tours. Intrepid ALEC members can follow the well-worn trail of oil and gas lobbyists to Zinke's door, whose secret meetings, expensive trips on charter planes, and pay-to-play politics have prompted 11 investigations into abuse of power and conflicts of interest.

While many new cookie-cutter bills are on the plate for this meeting, nonbinding draft resolutions outnumber new draft bills.

Just days after the federal government released an alarming report predicting increasingly deadly consequences from climate change that threaten to shrink the U.S. economy by as much as 10 percent, ALEC dives off the deep end to embrace a series of policies that will worsen the climate catastrophe.

With the Resolution Expressing Support for President Donald Trump's Energy and Environmental Policy Accomplishments, ALEC lobbyists give Trump a massive pat on the back for rescinding the Obama Clean Power Plan and the Waters of the U.S. Rule, cancelling U.S. participation in the Paris climate agreement, approving permits for the Dakota Access and Keystone XL pipelines, and other damaging policy decisions. The resolution "expresses support for President Trump's America First Energy Plan and congratulations and appreciation to the Trump Administration for its significant energy and environmental policy accomplishments to date."

But ALEC does not stop there. In its twisted version of "environmental stewardship," ALEC will consider the Resolution Concerning the EPA's Underground Injection control Class VI Rule to allow states to sidestep an Obama era regulation requiring EPA approval for "clean coal" plants' plans for underground storage of carbon dioxide. If approved, states could follow North Dakota's lead and regulate underground carbon dioxide storage instead of the EPA, despite concerns of CO2 leaking into the air or water or causing earthquakes.

ALEC also is introducing a Resolution in Support of State Carbon Dioxide Pipeline Corridors to promote the development of infrastructure to move CO2. CO2 is used by fossil fuel companies to extract crude oil in what is called "enhanced oil recovery." The Governors' Partnership on Carbon Capture was formed in June by Montana's Gov. Steve Bullock and Wyoming's Gov. Matt Mead on carbon capture policies. Louisiana, Kansas, Oklahoma, and Utah are also involved.

Other proposed resolutions that demonstrate infighting between energy interests or otherwise harm the environment include:

Banging the Drum to Rewrite the Constitution

Once again, ALEC meeting attendees will have an opportunity to hear about the right-wing's drive for a constitutional convention to rewrite the U.S. Constitution.

At last summer's annual convention, ALEC legislators were treated to presentations by hatemonger David Horowitz, former Sen. Tom Coburn (R-OK), and Tea Party founder Mark Meckler on why we need a new Confederacy and how to fight the opposition. Horowitz's offensive presentation triggered coverage by the Center for Media and Democracy (CMD) and a letter of protest from 79 civil rights and reform groups. Horowitz threatened to sue CMD and Verizon quit ALEC, saying its values did not reflect the company's.

The new BBA resolution calls on Congress to hold "an Article V Convention for proposing a Balanced Budget Amendment (BBA) and related fiscal limits" when 34 state Article V applications have been submitted. Twenty-eight states have passed resolutions calling for a constitutional convention on a balanced budget amendment since the 1980s, but advocates suffered a setback when three states voted to rescind last year, and they were unable to pass any additional resolutions in 2018. CMD reported in July 2017 about infighting between "con con" factions over the legal validity of the count and how many resolutions and applications were still legitimate and could be counted together.

ALEC is also discussing the Student Safety Scholarship Act in the education task force. Based on a law passed in Florida, the bill would give public money to kids bullied, or physically or sexually assaulted in public schools so they can attend private schools.

The ALEC model bill provides "the parent of a public school student who was subjected to an incident listed...an opportunity to transfer the student to another public school or to request a scholarship for the student to enroll in and attend an eligible private school," but does not indicate how the program should be funded.

Critics argue that the Florida law creates incentives for misuse, as families could create situations to take advantage of the scholarship. Also, there is no requirement in the law that participating schools be inclusive. The Huffington Post found that 10 percent of Florida schools that signed up for these scholarships have zero tolerance policies for LGBTQ students, and others promoted prejudiced ideas about different races and religions. Many participating schools also have strict hair policies that ban students with styles like dreadlocks or hair wraps, targeting students of color.

The ALEC agenda notes that attendees to the meeting will also consider amendments to the controversial School Turnaround and Leadership Development Act and the Forming Open and Robust University Minds (FORUM) Act.

In addition to praising the Trump administration for its Intellectual Property (IP) Provisions in the United States-Mexico-Canada Agreement (USMCA), ALEC, which has a long history of supporting job-killing trade agreements, is also hosting a workshop titled: Got Trade? Job Creation Often Begins Beyond Our Borders. The description takes a swipe at Trump tariffs and his trade war in saying, "Bringing corporate tax rates into line with the rest of the globe and reducing the regulatory burden for industry encourage investment in America, however, the tariffs proposed and adopted by the Administration have undermined these positive, pro-growth policies."

Other model bills and resolutions to be discussed at the States & Nation Policy Summit include:

Stay tuned to @ALECexposed @ExposedbyCMD for all your ALEC news!

Update: ALEC removed the Occupational Licensing Recognition Act and the Worker Parity Act from its agenda the morning of November 28, 2018, and added the Union Dues Act.