Scott Walker Has a History of Signing Plagiarized ALEC Bills 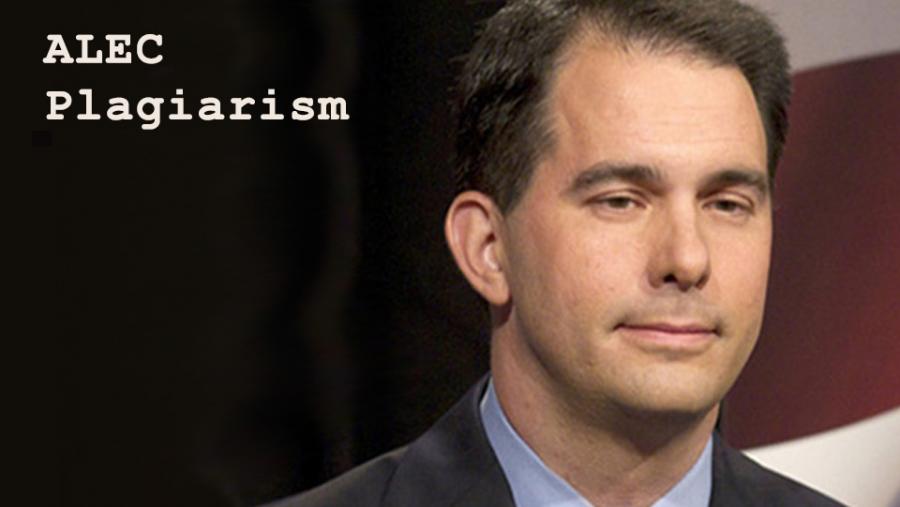 Wisconsin Governor Scott Walker, who has advocated for and signed binding legislation lifted without attribution from the corporate lobby shop known as the American Legislative Exchange Council (ALEC), is now blaming his opponent, Tony Evers, for copying paragraphs in the Department of Public Instruction’s 213-page budget proposal from other sources and failing to properly attribute them.

The story was first reported by Politico, which made no attempt to examine Walker’s history of signing copy-cat legislation.

In the 2011-2012 session, Walker signed into law 19 bills or budget provisions with ALEC content. The Center for Media and Democracy (CMD) wrote a report detailing this plagiarism called “ALEC Exposed Wisconsin: The Hijacking of a State.” Since then, many more ALEC bills have become law.

In 2015, Walker signed ALEC’s anti-union “right to work” bill into law. CMD was forced to do a side-by-side comparison, which you can access here, to illustrate to the Wisconsin media that the bill was a word-for-word copy of the ALEC “model” bill.

While ALEC’s strong influence in the state, through Walker and ALEC board member Leah Vukmir, and the copy-cat bills never got the attention it deserved from state media, Dan Kaufman of the New York Times took up the issue and made it a cover story for the New York Times Magazine, detailing how the bills were popping up simultaneously in state after state.

These anti-union measures and the later effort to repeal prevailing wage laws were not organic to Wisconsin, but extremist measures that had long been promoted by the Koch brothers and ALEC as a way to bust unions and weaken the Democratic Party in Wisconsin and nationwide.

This is the second time that Walker has politicized a plagiarism claim to slam his opponent in a race.