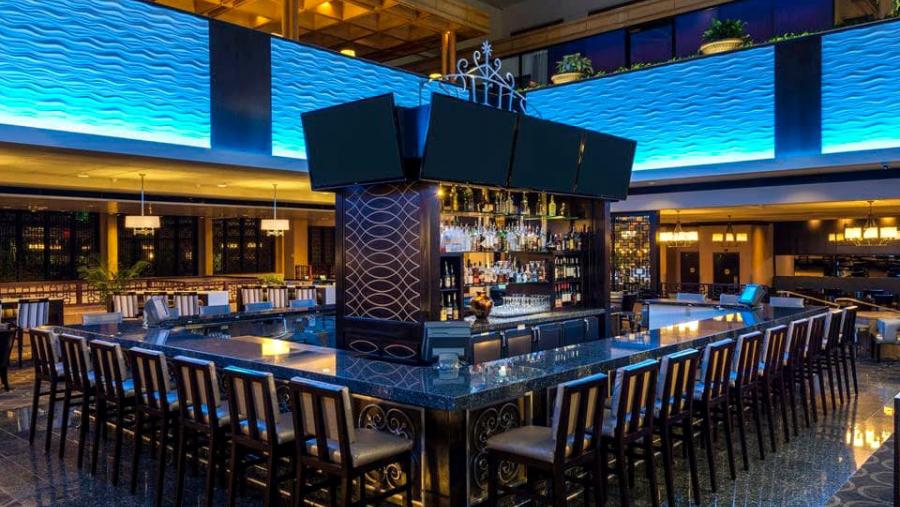 When the American Legislative Exchange Council (ALEC) convenes its 45th annual meeting of legislators and corporate lobbyists at the swank Hilton New Orleans Riverside hotel on August 8, it will serve up a veritable banquet of union-busting, gerrymandering, pro-fossil fuel, and school privatization proposals for lawmakers to take back home.

Welcoming the ALEC crowd will be Jason Saine, a North Carolina Representative and ALEC's National Chairman. Earlier this year, CMD reported that Saine used $19,000 from his campaign kitty to order custom-tailored suits.

Other keynote speakers will include Secretary of Transportation Elaine L. Chao, Secretary of Health and Human Services Alex Azar, Louisiana Governor John Bel Edwards, and White House Special Assistant in the Office of American Innovation Brooke Rollins. Rollins was an aide to former governor Rick Perry, who is now Secretary of Energy.

With citizens turning to the courts and ballot box in a growing number of states to clamp down on hyper-partisan "gerrymandering" schemes, ALEC members will instead be voting on a resolution to defend the right of politicians to keep hand-picking their voters.

Gerrymandering is the practice of manipulating electoral district boundaries to favor the party in power and minimize the ability of opposing parties or disfavored racial and ethnic constituencies to elect candidates of their choice.

The resolution, entitled "Draft Resolution Reaffirming the Right of State Legislatures to Determine Electoral Districts," asserts the legislative branch's "sovereignty" over redistricting and states that the "intervention of state supreme courts to redistrict congressional district maps violates the fundamental right of the residents of a state to republican self-government."

What has ALEC's knickers in a twist? In Pennsylvania, Republicans drew such a gerrymandered map in 2011 that it resulted in an astonishing 13-5 congressional district advantage in a state where Democrats won five straight presidential elections. The Pennsylvania Supreme Court intervened to ensure that new maps follow the traditional redistricting criteria of compactness, contiguity, and equality of population. In a blow to the Pennsylvania GOP, the U.S. Supreme Court declined to strike down the more balanced maps created by the court.

Other cases on similar grounds have made their way to the nation's highest court this year from Wisconsin, Maryland, and North Carolina. But the Supreme Court has so far declined to set clear rules limiting this type of voter manipulation.

With the Court failing to act, voting rights advocates are pushing hard for reforms. A quarter of U.S. states have already given non-partisan commissions full or partial authority to draw legislative districts, and with initiatives on the ballot this fall in Colorado, Michigan, Missouri, and Utah, more states may join them soon.

ALEC has invited Mark Janus, plaintiff in the Janus v. AFSCME case recently decided by the U.S. Supreme Court, to be a keynote speaker. ALEC, along with the State Policy Network (SPN) and the Kochs' Americans for Prosperity, are key institutions in a multi-pronged strategy to dismantle public sector unions through the courts and state legislatures across the country. CMD's reporting on this topic in February received national recognition.

Mark Janus was a public worker in Illinois whom groups put forward as a plaintiff in the case after the actual plaintiff, billionaire Republican Governor Bruce Rauner--who had vowed to dismantle unions for partisan political advantage--was found to not have standing. Rauner's case was originally filed and promoted by two SPN groups in the state, the Illinois Policy Institute and its offshoot, the Liberty Justice Center.

In May 2018, the U.S. Supreme Court used the ginned-up case to strike down agency fees and make it harder for public sector unions to operate. Shortly thereafter, Janus left public employment to take a job at the Illinois Policy Institute.

"As we celebrate 45 years of ALEC, we meet to create solutions for the future," ALEC CEO Lisa B. Nelson said in a press release about the meeting. But one of the first bills on the ALEC agenda has been on the corporate wish list for a very long time. ALEC's latest union-busting bill, which would force unions to hold recertification elections every other year, has long been pushed by anti-union PR man Richard Berman and others.

Under the proposed measure, unions would have to get the votes of a majority of all members--not just those showing up to vote--in order to retain their right to represent workers in a bargaining unit. That punitive standard is far more restrictive than anything used in corporate governance or U.S. elections. (Imagine a bill forcing the unseating of corporate directors if the majority of all shareholders, not just those casting ballots, did not vote for management--or a similar standard for politicians.)

In an audio recording obtained by CMD, Berman boasted about his obsession with unions and his attack on their efforts to raise the minimum wage for American workers: "I get up every morning and I try and figure out how to screw with the labor unions," Berman said.

Keeping Down Pay and Benefits in the Gig Economy

ALEC will also be considering a "Uniform Worker Classification Act" that promotes short-term contracts and freelance work over permanent jobs. The resolution focuses on "uniform standards for determining who is an employee and who is an independent contractor," but is designed to establish a very broad definition of independent contractor that lets employers off the hook for the rights and benefits enjoyed by traditional employees and prevents union organizing. Misclassifying workers is a classic corporate strategy for short-shrifting employees and has been the subject of much litigation.

While companies such as Uber, Lyft, and TaskRabbit are changing the job market, they typically generate low-paying jobs with few or no benefits. The tenuous relationship between employers and employees in many of these jobs raises a passel of legal issues. Are these contract employees subject to the same wage and hour laws? Are these contract employees eligible for unemployment benefits, job training, workman's compensation, and other worker protections?

In New York, the state has taken steps to regulate the industry after six professional drivers killed themselves, and drivers for-hire and taxi drivers say they are not making enough to pay their bills or support their families. New York's Unemployment Insurance Appeal Board recently ruled that Uber and Lyft drivers are formal employees of the company, and Seattle recently gave Uber and Lyft drivers the right to organize a union. The model bill being considered at ALEC would attempt to fend off such regulation by lowering the bar for whom corporations can consider a contract employee.

The NetChoice trade association represents e-commerce employers such as Lyft and Airbnb at ALEC and is likely responsible for this bill. The National Employment Law Project has a handy fact sheet on why this is such an important issue.

ALEC Is Not Fond of Green Cars, But Loves Driverless Vehicles

ALEC will debate a "Resolution Regarding Subsidies and Mandates for Energy Vehicles and Fuels."

The measure expresses opposition to "all federal, state, and local efforts to compel consumers to subsidize any and all vehicles, energy, fuels, and fueling infrastructure." Oil Change International tried to put a price tag on U.S. oil and gas subsidies and pegged them at about $20 billion per year.

At face value, it sounds like ALEC is considering taking a bold new stand against fossil fuel companies such as Koch Industries, Peabody Energy, and others that have long underwritten its work. Could ALEC be objecting to the millions in subsidies that Koch Industries receives from federal, state, and local governments (some $430 million and counting according to Good Jobs First)? Does this explain why ExxonMobil decided to dump ALEC earlier this year?

But something about the wording of the resolution, especially the language condemning "agreements in which costs to construct and operate fueling infrastructure are socialized" and an "infrastructure that will likely be used by a small minority of consumers," suggests that they are only talking about electric vehicles.

As CMD has reported, the Kochs have long opposed electric vehicles, public transportation, renewable energy, and other clean energy initiatives, and this resolution appears to be more of the same.

In taking a stand against renewables, ALEC is not just out of touch with the world, it is out of touch with its own base. Prominent GOP pollsters have shown that 72 percent of conservative Republicans want to accelerate the development of clean energy to reduce pollution and create jobs. A solid majority of 54 percent believe the world's climate is changing and that mankind plays a role in the change.

Also under consideration for the August meeting is the "Driving Automation System Uniformity Act," which would bar localities from regulating driverless vehicles, continuing ALEC's love affair with preempting local democracy. ALEC members have fought to preempt living wage campaigns, plastic bag bans, and paid sick leave ordinances across America. At this meeting, ALEC will also be reviewing a 2012 policy calling for the preemption of local food and nutrition policy.

Over the years, ALEC has worked hand-in-hand with the DeVos family's group, American Federation for Children, to advance a "cash for kids" model of school privatization, including dozens of bills promoting school vouchers. For decades, ALEC billed vouchers as a civil rights ticket for low-income kids, but then ALEC's "Education Savings Account Act" created a "universal" system that siphons off public education dollars to private school parents of any income level. Now ALEC is debating a new bill, the "Economic Development Zone ESA Act," to require the state to pay the equivalent of public school aid toward any private school for students who live in majority low-income economic development zones. Given the cost of a private school education, the likely effect would be to subsidize the ability of middle- and upper-income families in economically distressed areas to pull their kids out of public school.

A Resolution on School Violence Misses the Mark

ALEC's proposed "Statement of Principles on School Safety and Security" begins with the bold statement, "The American Legislative Exchange Council recognizes the presence of violence everyday in America's schools," and states that "evil, mental illness and alienation are clearly factors."

What follows is a 1,600-word statement chock-full of platitudes and non sequiturs that mentions guns only once and gun control not at all.

While ALEC is a big fan of preempting local control, in this instance the draft proposal states that "[a]ll decisions regarding school safety and security should be made by local authorities." ALEC is happy to turn over the issue to localities because it knows that local authorities in 43 states are already preempted from regulating firearms.

There are many other items on ALEC's agenda for the New Orleans meeting including the following draft bills:

Draft Resolution in Support of the Taiwan Travel Act

Draft Reforming How Federal Grants Are Provided to the State