Scott Pruitt Has Spent a Total of $4.6 Million on Security, New Disclosures Show — Including $1,500 on "Tactical Pants" | PR Watch

Scott Pruitt Has Spent a Total of $4.6 Million on Security, New Disclosures Show — Including $1,500 on "Tactical Pants" 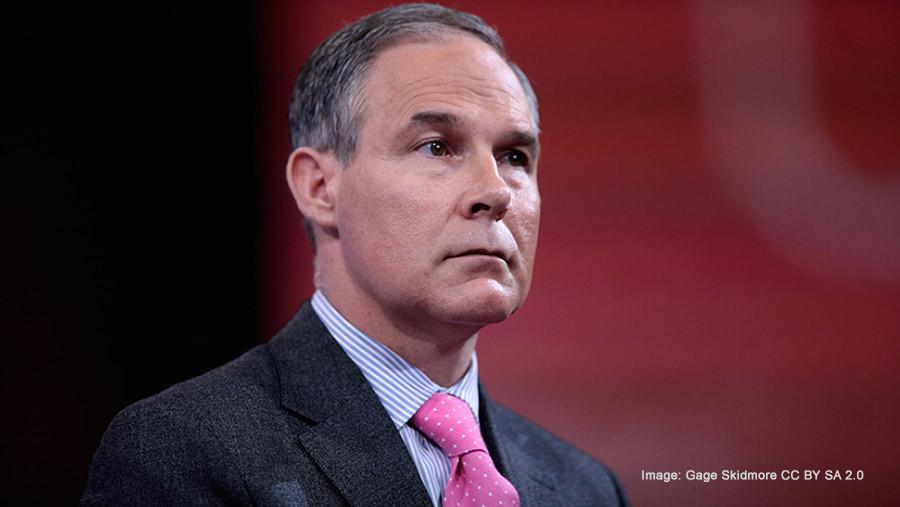 By Lee Fang and Nick Surgey

Scandal-Plagued Environmental Protection Agency Administrator Scott Pruitt has now spent more than $4.6 million from public coffers on security, according to documents obtained by The Intercept and Documented under the Freedom of Information Act. The amount represents a $1.1 million increase from Pruitt's total security costs as released in another disclosure just a month ago.

Pruitt's high spending on security has become the subject of mounting criticism and a host of official investigations: Several EPA inspector general investigations have been opened, as well as an ongoing investigation by the Republican-controlled House Oversight Committee.

Records released under the Freedom of Information Act list expenditures totaling $288,610 on a range of security-related items. The EPA, according to three expense line items for April, spent a total of $2,749.62 on "tactical pants" and "tactical polos."

Since last year, shortly after his Senate confirmation, Pruitt's office began purchasing security-related items, including multiple vehicle leases, over $80,000 worth of radios, $700 in shoulder holsters for the radios, and a kit to break down doors, among other purchases.

An EPA spokesperson did not respond to a request for comment.

The expenses eclipsed spending by Pruitt's predecessors. Former EPA Administrator Lisa Jackson, who served during President Barack Obama's first term, averaged less than a third of the travel and security costs accrued by Pruitt in his first fiscal year, according to records.

In May, CNBC and other outlets reported that the mounting cost of Pruitt's security detail had reached $3.5 million, but that didn't include any of the cost of equipment or the most recent salary and travel expenditures.

Despite the mounting criticism of Pruitt's high spending, his security expenses have continued to rise. Security payroll spending for his office increased in the most recent quarter by $138,373 — totaling $742,205 and almost double the cost from the same period in 2017.

EPA administrators are not typically provided with 24-hour protection, but Pruitt has received the service. The EPA defended the move by pointing to an increased number of threats. Yet Senate Democrats claim that they have reviewed an internal EPA security assessment and that no actual credible threats have been received. According to the lawmakers, among the threats considered by the EPA were protesters asking questions at events and a postcard received by Pruitt's office that said, "Climate change is real!! We are watching you."

Pruitt's office spent $24,115 on a variety of tactical clothing and body armor in seven separate orders. All of the tactical gear was purchased in 2018, more than a year into Pruitt's tenure as EPA chief. The agency spent a staggering $88,603 on radios and accessories, including holsters and travel chargers.

According to the expense records, Pruitt's office also spent $150,900 on leasing vehicles. The list of expenditures does not break down how many vehicles were leased or any specific details about them, but the rate is considerably higher than past expenses along these lines. By contrast, when Pruitt received an upgraded Chevy Suburban with bullet-resistant seats, the one-year lease for that vehicle had cost $10,200.

The agency also spent $931 in September 2017 on a "breaching kit" — items typically used by law enforcement to gain entry to a locked building or vehicle. Pruitt's security team has run into problems with locked doors before: His security detail called the police to his apartment on March 29, 2017, when they became concerned that they couldn't contact him. Pruitt was taking a nap, but the police and guards smashed down the door and eventually had to pay $2,460 to replace it. Despite that embarrassment, the security detail now has its own door-smasher.

The security expense records also show that $6,786 was spent to install a card reader in the security detail office and to connect a panic alarm from Pruitt's office to sound in their office.

The profligate public spending is a far cry from Pruitt's political rhetoric. Announcing his bid for lieutenant governor of Oklahoma in 2006, Pruitt asked supporters to join him to "reverse our course and embrace fiscal conservative principles."

First published by The Intercept.