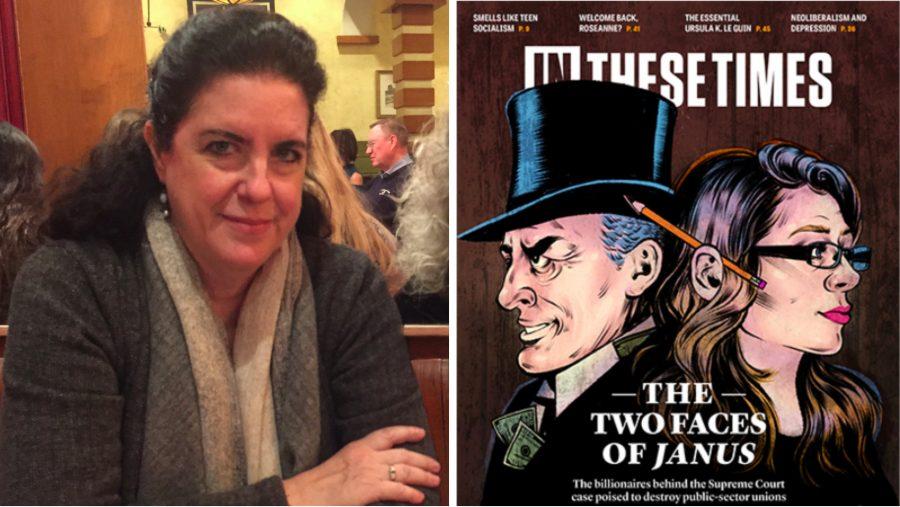 The Supreme Court is currently deliberating Janus v. AFSCME, a case that could decimate public sector unions and the Democratic Party. The lead plaintiff, Mark Janus, is an Illinois child-support worker who ostensibly doesn't want to pay union fees, but the money and strategy behind the lawsuit came from a network of billionaire-funded right wing think tanks.

The Supreme Court decided 40 years ago that unions can collect "fair share fees" from non-members to cover the cost of bargaining, but not political activity. The Janus plaintiffs want to kill fair share fees for public sector unions on the grounds that all money is speech in a post-Citizens United world.

Bottari traces the roots of the Janus case to a sophisticated, lavishly-funded, nationwide campaign bankrolled by billionaires, including Illinois Governor Bruce Rauner and the Koch Brothers. The Bradley Foundation has spent over $135 million to defund labor; Donors Trust/Donors Capital Fund has spent over $70 million.

The cash flows to what some scholars call a "troika" of organizations: the American Legislative Exchange Council (ALEC), the State Policy Network (SPN) and the Koch's Americans for Prosperity. ALEC writes model bills for state legislators, SPN think tanks provide intellectual cover and legal briefs and Americans for Prosperity provides the illusion of grassroots support. The end result is right-to-work legislation in red states and lawsuits like Janus in blue states.

"The attack on public-sector workers is also an attack on women and African Americans, groups disproportionately represented in public-sector unions," Bottari writes. Many of the leading backers of privatized education are simultaneously financing the assault on teachers' unions.

"The recent successful teachers' strike in West Virginia demonstrates that public sector workers are prepared to fight for their jobs and the people they serve," said Sidney judge Lindsay Beyerstein.

"If the U.S. Supreme Court rules in favor of the anti-union groups overturning 40 years of precedent and thousands of contracts for millions of workers, we are likely to see a lot more West Virginias," said Bottari, in an interview for Backstory.

Mary Bottari is a senior reporter for the Center for Media and Democracy (CMD) in Madison, Wisconsin. She is now a two-time Sidney Award winner. Bottari spearheaded CMD's work on the Wall Street meltdown and subsequent attacks by ALEC politicians on wages and working families, public education, paid sick days and more.

Read The Backstory, a Q&A with Mary Bottari here.

The Sidney Award is given each month to an outstanding piece of journalism by the Sidney Hillman Foundation, which also awards the annual Hillman Prizes every spring. Winners of the Sidney receive a certificate designed by the New Yorker cartoonist Edward Sorel and a $500 honorarium.