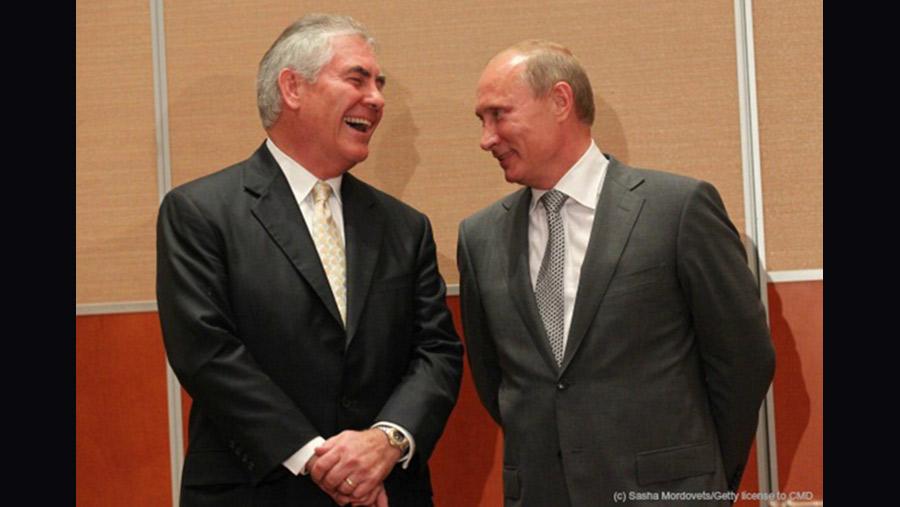 Rex Tillerson, Donald Trump's likely choice to be America's top diplomat as Secretary of State, has spent years funding climate change denial and underwriting efforts to block measures to address climate change while misleading the public, according to evidence compiled by the Center for Media and Democracy.

As CMD detailed in a joint complaint filed with the IRS shortly before the election, Exxon has used the American Legislative Exchange Council "as a key asset in its explicit campaign to sow uncertainty about climate science, undermine international climate treaties and block legislation to reduce emissions."

This includes attacks on the Clean Power Plan which sets out modest steps to try to mitigate the devastating effects of climate change being caused by the burning of fossil fuels.

CMD reviewed thousands of pages of evidence obtained through open records requests, original research, and public financial documents to detail how under Rex Tillerson's leadership Exxon used a charity, ALEC, to advance legislation of direct benefit to the company.

According to CMD's evidence, over a 17-year period, Exxon and its foundation spent more than $1.7 million to finance lobbying activity by ALEC as a charitable tax write-off. Tillerson has been the CEO of Exxon for 12 of those years.

As noted by Eric Havian, a partner at the law form of Constantine Cannon who specializes in tax law, CMD's evidence shows that Exxon has used "ALEC's charitable status to fuel its disinformation campaign on climate change, so taxpayers are literally paying Exxon to lie to them."

Havian prepared the complaint based on research by CMD's general counsel, Arn Pearson, its research director, Nick Surgey, and its researcher, Jamie Corey, and filed the evidence with the IRS Whistleblower Office under Common Cause's initial 2012 complaint, which followed CMD's launch of ALECexposed.org.

With Tillerson at the helm of Exxon, the company has paid ALEC to have a leadership role in its operations, both on the its corporate board and on its task forces, where corporations vote as equals with legislators on "model" bills that are then pushed into law in state legislatures and Congress.

According to CMD's original document review, Exxon's collusion with ALEC "helped introduce scores of coordinated bills in state houses across the country, including resolutions in 22 states to oppose EPA's plan to regulate greenhouse gases."

Since launching ALECexposed, CMD has been contacted by numerous whistleblowers about public corruption, and CMD initiates thousands of open records requests each year about corporate efforts to influence public policy.

Earlier this year, CMD "released notes from closed-door meetings between Republican attorneys general and fossil fuel industry lobbyists to coordinate on defending ExxonMobil as the company faces an ongoing investigation over allegations that it intentionally misled the public and its own shareholders about climate change."

Tillerson's extensive personal ties to Russian President Vladmir Putin and with his role in working with Russia to exploit the Arctic--despite deep concerns of the world's leading independent scientists about any massive expansion of the burning of fossil fuels--will be probed at potential confirmation hearings early next year. Notably, Tillerson's block of shareholders held off a voluntary measure sought by minority stockholders from the Rockefeller family to significantly expand Exxon's investment in alternative energy sources.

The role of Tillerson and Exxon in peddling climate change denial doubts to state and federal politicians through ALEC also calls into question his fitness for such a position of public trust to advance the public interest of all Americans, rather than the narrow corporate enrichment interests he has pursued throughout his entire career for one of the richest corporations in the world.

Notably, ALEC has also sought to block any effort to impose windfall profits taxes on Exxon as its profits have soared even as the wages of ordinary Americans have stagnated.

The detailed evidence of Tillerson/Exxon's role in using ALEC to peddle climate change denial and thwart efforts to address climate changes is available in the attachments on Document Cloud listed here.