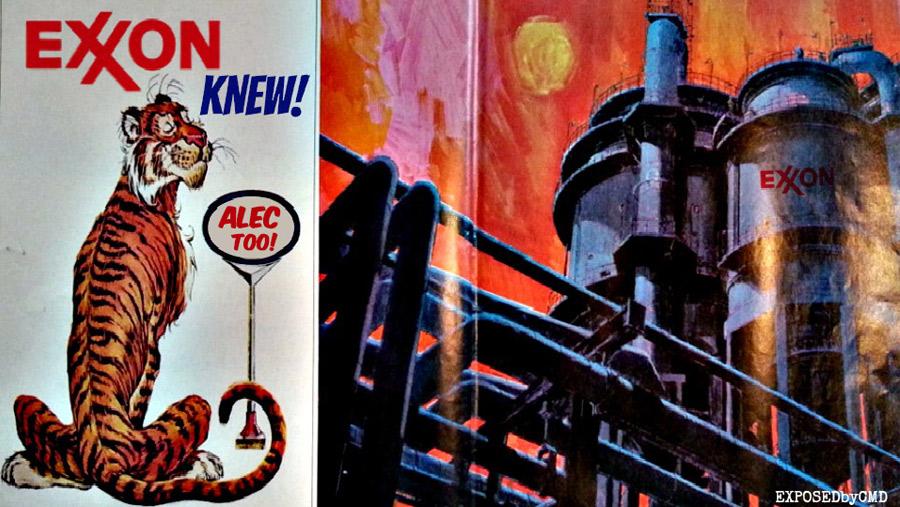 In a new filing to the IRS – adding to an active investigation prompted by a 2012 complaint that ALEC is operating as a corporate lobbying group while registered as a 501(c)(3) nonprofit charity – the watchdog organizations detail for the first time how Exxon has used ALEC as a key asset in its explicit campaign to sow uncertainty about climate science, undermine international climate treaties and block legislation to reduce emissions. While ALEC purports to spend zero dollars on lobbying, Exxon has deliberately used ALEC for the past two decades to advance its legislative goals concerning cap-and-trade policies, fracking, the Keystone Pipeline and the Obama Administration's Clean Power Plan.

"It has become painfully obvious over the past few years that ALEC is corporate lobby front group masquerading as a charity—at taxpayer expense," said Arn Pearson, general counsel at CMD. "If the laws governing nonprofits are to mean anything, the IRS needs to take action to enforce them in this case."

"For years ALEC has been a key asset in Exxon's multi-billion dollar campaign to push a dangerous climate-denial agenda and secretly lobby politicians on anti-environmental legislation that pollutes the environment," said Karen Hobert Flynn, president of Common Cause. "It is time for the IRS to act and curb these blatant abuses."

Today, CMD and Common Cause provided the IRS Whistleblower Office with extensive evidence obtained through open records requests, original research and public financial documents detailing intentional misuse of ALEC by the Exxon to advance legislation of direct benefit to the company. Over a 17-year period, Exxon and its foundation spent more than $1.7 million to finance lobbying activity by ALEC on legislation and public policies that benefit the corporation, while improperly and illegally claiming a tax deduction for those expenditures.

"ALEC acts as a nonprofit lobbying concierge, with Exxon its eager patron," said Eric Havian, a partner at Constantine Cannon and a prominent whistleblower lawyer handling the case. "It is corrupt to use the tax laws as a cover for corporate lobbying, but it's even worse in this case. Exxon uses ALEC's charitable status to fuel its disinformation campaign on climate change, so taxpayers are literally paying Exxon to lie to them."

Exxon has paid substantial sums to serve in a leadership capacity at ALEC, both on the group's corporate board and on energy-related issue task forces, where corporations introduce "model" legislation and hold de facto veto power over what bills are subsequently promoted by ALEC. Exxon's collusion with ALEC has helped introduce scores of coordinated bills in state houses across the country, including resolutions in 22 states to oppose EPA's plan to regulate greenhouse gases.

That activity constitutes a gross violation of federal tax laws by Exxon in its own right, and further reinforces the case against ALEC for abuse of its 501(c)(3) charitable status.

In a letter to IRS Commissioner John Koskinen, CMD and Common Cause urged the agency to expedite the Whistleblower Office's open and active investigation into potential civil and criminal liability for both ALEC and Exxon, revoke ALEC's 501(c)(3) status, impose any necessary civil and criminal penalties, and collect unpaid back and present taxes for nondeductible lobbying activities from both ALEC and its corporate donors.

Last month, CMD released notes from closed-door meetings between Republican attorneys general and fossil fuel industry lobbyists to coordinate on defending ExxonMobil as the company faces an ongoing investigation over allegations that it intentionally misled the public and its own shareholders about climate change.

Read the Letter to the IRS here.