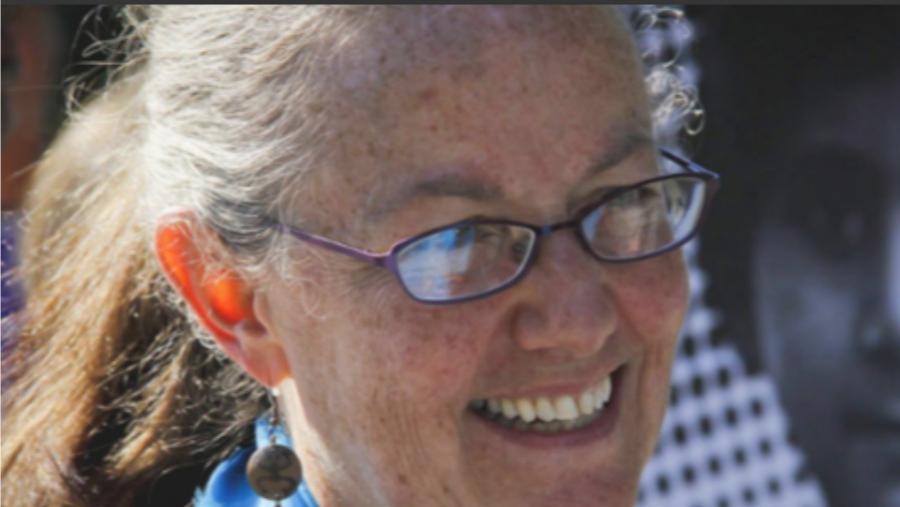 David Swanson and Pacifica have released a new audio of the first interview of Mary Anne Grady Flores from jail in upstate New York, where she is serving a sentence for photographing Americans speaking out against the military's drone program.

Ms. Grady Flores has also released a letter sharing her views on the importance of continuing activism against the government's use of unmanned drones, which are being used to target and kill people national security officials have designated as terrorists and which can also kill and injure bystanders. She describes this as a "kill chain."

She was arrested for violating an "order of protection" when she photographed eight protesters, many of whom were Catholic Workers, who were being led away from Hancock Airforce Base in Syracuse, New York. This base in upstate New York is one of twenty across America used to deploy weaponized drones in countries such as Pakistan, Yemen, and Libya.

An order of protection is traditionally issued by a family court to protect victims of domestic violence against abusive spouses/partners. In this bizarre case, the order was issued to protect the leader of a military base and heavily armed soldiers from peaceful, unarmed protesters expressing their First Amendment right to dissent, on American soil near the base.

She began serving her sentence in mid-January.

Here is an excerpt from her letter:

"This is a critical moment in the six years of Hancock Resistance. Stopping killer drones is our #1 continued focus, no matter what tool is used to try to chill the movement. We must keep our focus on the voices of the drone victims.

I don't ask for pardon, nor do my fellow drone resisters, because as people of conscience we must speak out, as Jerry did, to stop the death-dealing by our government and military. It is our First Amendment right to stand at the gate of Hancock Air Base, asking our government for redress of our grievances, specifically, to end this killer-drone policy, which in 2015 alone killed over six thousand people.

Immediately after the Paris attacks, the four whistleblower drone pilots sent a letter of criticism to President Obama, defense secretary Ashton Carter and CIA chief John Brennan. In part, their letter said: "We came to the realization that the innocent civilians we were killing only fueled the feelings of hatred that ignited terrorism and groups like Isis, while also serving as a fundamental recruitment tool, similar to Guantánamo Bay. This administration and its predecessors have built a drone program that is one of the most devastating driving forces for terrorism and destabilization around the world."....

Many thanks to all of you who have written to me in jail, sending poems, articles, artwork and jokes, bringing light and laughter to me and the women here. Thanks for your photos and reports of your anti drone witnesses! Thanks to all the vets old and young sending me letters of their peace witnesses. Thanks for the MLK quotes and others and your own as well. I'm a slow writer, so forgive me if I don't get back to you. Each of your letters (except the ones held back) are read and treasured.

Thanks to folks bringing meals to Mom. I know many of you have written to me at my home and I look forward to reading your cards when I return. Also thanks to folks who have generously donated towards my home and jail expenses and Mom's care. Thank you for those gifts. I'm feeling so much gratitude for all that you have showered upon me."

Here are some of the additional resources Ms. Grady Flores flagged for concerned citizens: