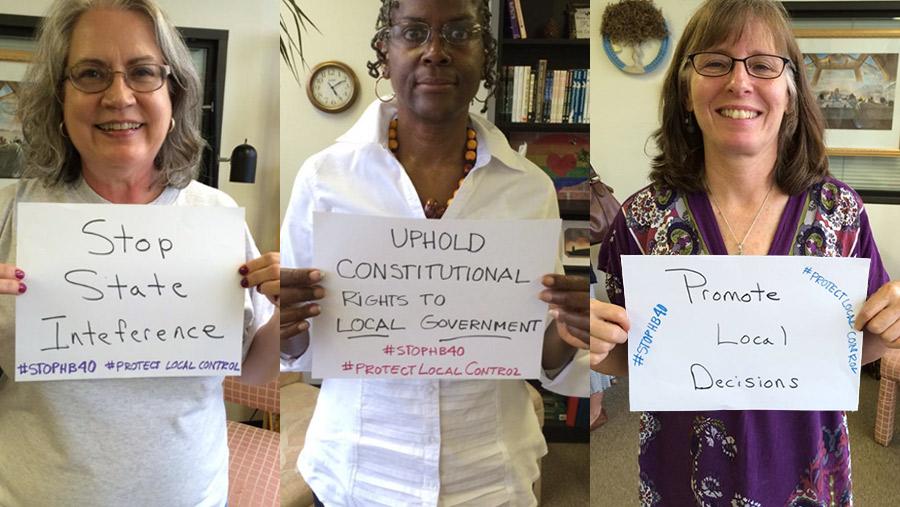 Across America, corporate interests are taking aim at local government.

With Congress gridlocked and a majority of state legislatures controlled by right-wing interests, cities have become laboratories of democracy for progressive policies like a higher minimum wage, LGBTQ protections, or parental leave.

In response, corporate interests and groups like the American Legislative Exchange Council (ALEC) have increasingly been turning to state "preemption" measures—some of them unprecedentedly aggressive--to override an array of progressive policy gains at the city or county level.

Last year, state legislatures in at least 29 states introduced bills to block local control over a range of issues, from the minimum wage, to LGBTQ rights, to immigration, according to Preemption Watch. Seventeen states considered more than one preemption bill.

And just a few weeks into 2016 state legislative sessions, it's clear that ending local authority will continue to be the go-to strategy for state legislators and their special interest allies, as a means of blocking earned sick days, minimum wage hikes, tobacco and fracking bans, pro-worker policies, or anti-discrimination laws.

Bills to stop local fracking bans have been already filed this year in Colorado, New Mexico and and Florida. Minimum wage preemption bills have been filed in Washington and Illinois. Legislation has been filed in Indiana, Michigan and New Mexico to stop local action on fair scheduling ordinances. Advocates are tracking preemption bills targeting LGBTQ ordinances in South Carolina, Virginia, Oklahoma and Indiana, and expect to see bills in North Carolina, Mississippi and West Virginia. Unions are bracing for bills in a spate of states aimed at limiting municipal labor standard-setting.

In Florida alone, lawmakers have already filed more than 20 bills seeking to preempt local authority on issues including oil and gas regulations, construction standards for abortion clinics and whether a town can declare itself a sanctuary city.

And in Oklahoma, legislators just introduced a wide-ranging bill to effectively undo home rule and local control. Under the proposal, local governments would be prohibited from doing almost anything that isn't specifically authorized by the state legislature.

Over time, bills interfering in local democracy have become wider in scope and more hostile to home rule. More industries and special interest groups now consider preemption a legislative imperative, using it not just to stop the advancement of policies they disagree with, but also to undo elections and repeal laws already on the books.

These efforts to consolidate power at the state level and stop local progress are part of a long-term corporate-driven strategy. The Koch-funded ALEC and its local offshoot, the American City County Exchange (ACCE), have been central to this anti-local democracy effort. ALEC has long pushed bills like the "Living Wage Mandate Preemption Act" to block local governments from raising the wage. It has worked to preempt community-run municipal broadband in 19 states – which benefits ALEC funders like AT&T and Comcast -- and local anti-GMO policies, which benefits ALEC funders like CropLife America.

A new trend that emerged in 2015 was the introduction of wide-ranging bills prohibiting local control over a broad set of issues, such as Michigan's "Death Star" preemption bill (HB 4052) which bars local governments from regulating everything from paid sick days and minimum wage to scheduling for retail stores and ban the box ordinances. Originally, the bill included language that could have eliminated local protections against LGBTQ discrimination. That section was not contained in the final law, but it did pass in Arkansas. North Carolina also considered a "Death Star" preemption bill last year, but too late in the session to move it.

2015 also saw narrowly-focused bills evolve into comprehensive attacks on local control. These so-called "Christmas Tree" bills start out as say, a ban on local plastic bag regulations, and are then hung with an array of other provisions crafted to override local lawmaking. For example, a law in Missouri enacted last year that blocked local government authority to enact paid sick days or raise the minimum wage started as a plastic bag ban.

Last year also saw the rise of "super-preemption" bills that not only block local governments from enacting regulations, but give corporations and individuals the right to sue cities or counties if they don't comply.

Here is a snapshot of some corporate-backed efforts to override local control in 2015:

The spread of these bills can be tied to ALEC and its funder the National Restaurant Association (NRA), which represents big chain restaurants. At ALEC's August 2011 meeting in New Orleans, an NRA executive shared a paid sick day preemption bill that had recently been signed into law by Wisconsin Governor Scott Walker, as well as an NRA target list and map of state and local paid sick leave policies. In the years following that meeting, similar paid sick day preemption legislation was enacted in sixteen states, in most cases introduced by ALEC members, and with backing from the state NRA affiliates.

In recent years, dozens of cities in states like Ohio and Pennsylvania have banned hydraulic fracturing, or fracking, citing public health concerns about water contamination and earthquakes.

Yet after residents of Denton, Texas voted for an anti-fracking ballot initiative in November 2014, the oil and gas industry began to fight back. The industry quickly sued, and ALEC legislators in the state capitol responded with a deluge of bills to override local authority over public health—even though most Texans support local control over fracking.

ALEC has acknowledged its role in promoting fracking preemption, and at the December meeting, of ALEC's local government-focused spinoff, ACCE, members were warned of the "epidemic" of "draconian" local restrictions against fracking, according to a report from the meeting. Jacki Pick of the Koch-backed National Center for Policy Analysis (and a talk show host on Glenn Beck's "The Blaze" network) warned that "the oil and gas industry will be destroyed unless conservatives act."

Both Texas and Oklahoma adopted laws preempting local governments from regulating the oil and gas industry in 2015. Bills were also introduced in Florida and New Mexico. In Wisconsin, where the fine silica sand used in fracking is mined, the Republican-controlled state legislature also considered bills to override local frac sand mining regulation.

"The push for LGBT nondiscrimination protections--laws that would cover both sexual orientation and gender identity in the areas of employment, housing and public accommodations--have stalled at the statewide level," said Andy Garcia, Program Manager at the Equality Federation. "As a result, efforts have shifted to the city and county level in the form of municipal nondiscrimination ordinances."

"Hundreds of these [nondiscrimination ordinances] have passed," Garcia said. "In Florida, for example, more than half the population is protected through these ordinances."

Yet in 2015, at least six states took up bills to override these local protections.

In Arkansas, the legislature enacted SB202, which reverses local nondiscrimination ordinances in Little Rock and Eureka Springs in the name of "uniformity." Yet because the state does not protect against discrimination on the basis of sexual orientation or gender identity, the law actually guarantees that there can be no protections.

Texas also considered legislation to override local non-discrimination ordinances, such as those in Austin, Dallas, Fort Worth and Houston. That bill hasn't passed but could return in a future session. Similar bills were introduced last session in Mississippi, North Carolina, and West Virginia.

As Tempe Councilmember Lauren Kuby wrote for PR Watch, plastic bag preemption was a hot topic at the most recent ACCE meeting, with a bag industry representative warning that local plastic bag regulations serve as "stepping stones to the regulation of all packaging."

In 2015, Missouri also enacted a law to prohibit any local unit of government from banning plastic bags.

2015 also saw the spread of state bills to preempt so-called "sanctuary city" policies, proposals that also have their roots in ALEC model legislation.

Many cities and counties prohibit law enforcement from inquiring into a person's immigration status and limit when people can be turned-over to immigration authorities.

Supporters say the policies are a means of promoting trust between immigrants and public officials: if immigrants fear deportation by coming in contact with police, they will hesitate to report crimes and testify as witnesses.

"Social movements successfully partnered with local progressive leadership to win these policies, and anti-immigrant [state] politicians with little or no connection to the people affected by these policies are trying to obstruct important gains," she said.

To varying degrees, the proposals reflect provisions of the ALEC "No Sanctuary Cities for Illegal Immigrants Act."

The ALEC task force that approved the bill in December 2009 included a lobbyist for Corrections Corporation of America (CCA), which had identified immigrant detention as a profit center important for its future growth (although CCA claims it did not vote on the legislation). The bill not only preempted local sanctuary city policies but also encouraged racial profiling by requiring police inquire into the immigration status of anybody they "suspect" is undocumented.

A few months later the "No Sanctuary Cities for Illegal Immigrants Act" was introduced in Arizona as SB 1070. After the Arizona bill was introduced, 30 of the bill's 36 co-sponsors promptly received campaign contributions from donors in the for-profit prison industry. A similar law was subsequently enacted in Alabama.

Some proposals, like North Carolina's law, also prohibit public officials from accepting foreign driver's licenses or passports as proof of identity, even to pick one's child up from school. Wisconsin legislators introduced a separate bill to override a Milwaukee ordinance providing local ID cards to immigrants and others.

Throughout the 1990s—with help from ALEC—the gun industry successfully pushed laws in almost every state prohibiting cities from regulating firearms. In recent years, the gun industry has sought to enact even greater barriers to local control with what Preemption Watch calls so "super-preemption" legislation.

These laws go beyond just blocking local regulations. These "super-preemption" bills additionally create what is known as a "private right of action" allowing individuals or groups the right to sue local governments and, in some cases, individual local officials, if they believe they are enforcing local firearms laws.

In 2015, North Carolina and Nevada enacted firearms super-preemption laws, joining Pennsylvania, Tennessee and Wyoming, which adopted similar legislation in previous years. Firearms super-preemption bills were also introduced in Arizona, Iowa, Michigan and Texas. Additionally, bills were filed in six states to override local governments' ability to regulate knives, and the states' governors ultimately signed half of these into law.

Some state lawmakers and advocates are looking to reverse the corporate-backed trend towards preemption. In Minnesota, House Bill 221 aims to reverse preemption and give rights back to local governments. In Oregon, the "Raise the Wage" initiative, one of two potential measures that could make it to the November ballot, would allow local jurisdictions to set their own thresholds above the statewide minimum by removing a pre-emption law.

"For 2016, there's bad news and good news," Pertschuk says. "The bad news is that dozens of harm-causing industries are ramping up for an assault on local democracy. The good news is that there has never before been a national grassroots movement this powerful and diverse fighting for the right to protect our families, communities, and workers at the community level."